It’s the last set of the day. The bell rings and everyone rushes out of class. Students buzz about their plans after school and hurry to get off campus. However, at least a hundred girls head to the locker room. None of them can go home after school because of a practice or a game. When they arrive, […] 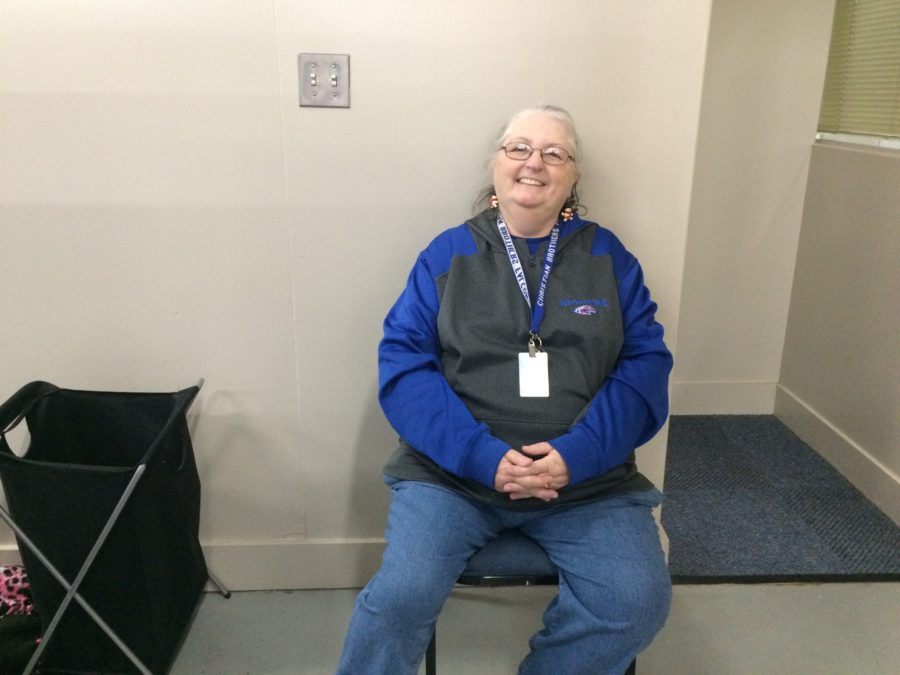 It’s the last set of the day. The bell rings and everyone rushes out of class. Students buzz about their plans after school and hurry to get off campus. However, at least a hundred girls head to the locker room. None of them can go home after school because of a practice or a game. When they arrive, each of them is greeted with a friendly hello. Even if a girl has had a bad day, the inevitable smile and welcome from Mrs. Mickie Wolfing makes her day a little brighter.

But who is this woman who makes such a difference in so many girls’ lives here at CB? What is the story behind her smile?

Mrs. Wolfing was born on May 31, 1953 in Sacramento. She went through the public school system, graduating from Hiram Johnson High School in 1971 and Sacramento City College in 1975.

As a part of the baby boomer generation, her educational experience was quite different than the experience of students today. Her generation was the largest group ever to go through the school system. When Mrs. Wolfing went into kindergarten, her elementary school had eight different kindergarten classes. Fast forward to her high school graduation: her class entered eight at a time and it still took thirty minutes for the whole class to get in and seated.

The high number of kids her age did not help Mrs. Wolfing when it came time for her to get a job. She graduated from Sac City with an Associates degree as a medical secretary but ended up being hired as a secretary for a pest control company.

However, her career meant little in comparison to her volunteer efforts. Mrs. Wolfing began helping at the United Service Organization at twelve years old. The USO serves the military and their families and is still very active today, with its centers mainly located in airports and large cities. During the Vietnam era, when Mrs. Wolfing worked in this organization, it was a place soldiers could come to relax and have a good time.

She helped her mother at the USO until she was eighteen when she became an official volunteer herself. At the USO, she baked cookies, organized dances for troops leaving for Vietnam, and sang and danced in the show troop that entertained soldiers at Travis Air Force Base in Fairfield.

“It was really an education for me because I got to see what war was doing to my age group,” Mrs. Wolfing expressed. “And regretfully a lot of my friends I grew up with were killed in Vietnam, so it was a sad time for our nation — it really was.”

A silver lining came along in her work with the USO when she met her husband, Mr. Carl Wolfing, on October 4, 1974. He came into the USO, brand new to the Sacramento area, for a boxed lunch social. A boxed lunch social, for those not acquainted with social customs of the 1930s and 1940s, is a gathering in which women would make a lunch and put it in picnic baskets that they decorated. Men would then bid on the baskets, and whoever won the auction on a particular basket would have lunch with the lady who made that basket.

“That was the worst casserole I ever made, but he ate it.”

The two hit it off and started dating after this first meeting.

Another organization Mrs. Wolfing was involved in is the Girl Scouts. She became a Girl Scout when she was nine years old and became a Girl Scout leader in 1970. She and her best friend were training to be leaders at the time; just two weeks after they were fully trained, they were notified that a leader had stolen cookie money from a local junior troop, so they took over the troop. When her best friend got married and had to leave the troop, Mrs. Wolfing’s future husband trained to be a leader and began helping her run the troop.

Mrs. Wolfing and her husband were engaged a few days before Thanksgiving in 1977. It was a joyous time for her until the following Monday when she arrived at work and was laid off. She was worried. How was she going to afford her wedding? When would she find another job? But she found that “when something doesn’t go my way, there’s a reason. When God closes a door, He opens a window.”

As it turned out, she was not forced to find another job until after her wedding. Mrs. Wolfing and her husband got married on February 25, 1978, two months before she had planned to get married. She dreamed of having an April wedding, but in a strange twist of fate, the pastor of her church would not perform the marriage in April because 1) she and her husband had been dating for four years and he thought they shouldn’t wait so long, and 2) there were no marriage times available in April.

Shortly after she got married, she got a call from a former coworker who had left the pest control company that had laid Mrs. Wolfing off for another. He told her that his pest control company needed a secretary and had her in mind for the job. She expressed that she didn’t want to work at the moment, especially not full time, because she had just gotten married. However, he responded, “Just tell me which days of the week you want to work and how much you want to get paid,” so she took the job.

Mrs. Wolfing’s husband still worked in the military, and a few months after the wedding, he got ordered to Czechoslovakia to work in the embassy. It was Mrs. Wolfing’s duty as his wife to go with him. The Vietnam War had ended by this time, and the world was in the midst of the Cold War. For better or worse, the military denied them for the position at the embassy because they had no children. Had Mrs. Wolfing gone, she would have had to go to Washington D. C. to learn a new language and different etiquette and customs.

Instead, she and her husband headed to Hawaii — not for vacation, but for work. After being denied for Czechoslovakia, Mr. Wolfing had been assigned to Hickam Air Force Base on the island of O’ahu.

They left for Hawaii in December of 1979. The day they left, California was cold — close to freezing — and fog filled the air. When their plane touched down in Hawaii, the air outside was still foggy. They assumed it would be cold due to the fog, but when they stepped out of the plane, they were startled by the heat and humidity.

At the base, Mrs. Wolfing worked at the day care center, taking care of infants and toddlers. She also taught Sunday school for fourth graders at the base chapel.

In 1981, she found out she was pregnant, and her first daughter was born in September of 1982. Her second child and first son was born two years later, also in September. A short time after her son’s birth, the family got orders to move to New York.

They stayed in a small town called Rome in upstate New York. Mrs. Wolfing’s husband was stationed at Griffiths Air Base, which has since been closed. During their time in New York, they had two more children: a son in 1986 and a daughter in 1991.

Disaster struck the air base on July 23, 1990. Rain pounded on the roof of the chapel as Mrs. Wolfing taught Vacation Bible School. Outside, the sky was dark. Gray clouds provided the backdrop for the lightning that flashed across the horizon.  Thunder rocked the entire base. After Mrs. Wolfing dismissed the class, an officer came to her and told her to take her family and go to the gym. As her kids played in the gym, she learned that a tornado had touched down in the housing area on the base. Many of the homes were destroyed.

During this time, Mrs. Wolfing and her family learned the term “‘the shirt on your back’ because for forty-eight hours we couldn’t go home; it was sealed off while they cleaned up from the tornado.”

Mrs. Wolfing and her family were very fortunate because their home did not incur severe damage. She recalls the incident as a sort of miracle.

“I had a statue of Mary in my garden with roses. Her garden was untouched.”

In 1991, her husband got orders for his forced retirement, so the family packed their belongings and embarked on a cross-country road trip back to California. With an infant and children ages two, seven, and nine, the drive was not always the most enjoyable. However, because it was the year of Operation Desert Storm, all of the amusement parks in the country were free to military members and their families. The family visited Disney World and Sea World in Florida, Six Flags in Texas, and the San Diego Zoo among others.

Unfortunately, when they arrived back in California, Mrs. Wolfing’s husband couldn’t find a job. She was forced to stand in line at the Food Bank, “which was extremely difficult because [she] was raised giving to the poor people. [She] never dreamed she would be one of those but [she] swallowed [her] pride, stood in line here in Oak Park, and got canned goods that would get [her] through maybe the month.”

She depended on the generosity of members of her church, who were often strangers. Many times, she would come home and there would be a bag of groceries at her front door.

Mrs. Wolfing learned through this experience not to “look down at somebody — because you may be the one looking up someday.”

Her husband eventually found a job, and life got better for Mrs. Wolfing. She worked at All Hallows Catholic School from 1995 until it closed. She worked in the office but also always helped in her kids’ classes as the room mother and a chaperone on field trips.

For the entirety of the 1990s and early 2000s, Mrs. Wolfing’s most important role was to be a mother. It was a full-time job; she drove her kids to all their activities, helped them with school, and did all the things she needed to do to raise them. For a couple years she had eleven children living in her household because she took in the children of a family friend who was going through a hard time.

Mrs. Wolfing began working at CB about ten years ago. She was hired to work in the cafeteria and became known as the “soup lady” because she was the only one tall enough to get the ladle out of the soup kettle. During the years that her son, Paul Wolfing ’05, went to CB, she also volunteered in the office.

As Locker Room Supervisor, Mrs. Wolfing truly makes a difference in the CB community. All of the female athletes really appreciate her loving attitude and endless supply of friendly smiles and support. 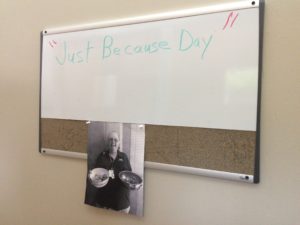 An advertisement for “Just Because Day” as seen on December 9, 2016

Mrs. Wolfing is truly a role model for all of us here at CB. She goes out of her way to help others and never ceases working to make the world a better place.