Mr. Bernie Eckel is the beloved Honors / AP Chemistry teacher here at Christian Brothers and is also the wresting coach. Holding both jobs, he’s a familiar face around the CB campus — in fact, if you know him and see him strolling down the hallway, he expects a “Good Morning Mr. Eckel,” accompanied with a […] 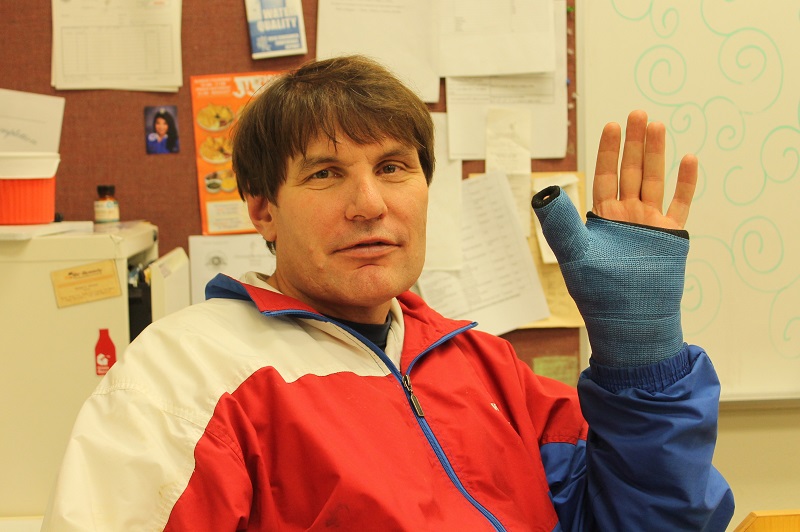 Mr. Bernie Eckel is the beloved Honors / AP Chemistry teacher here at Christian Brothers and is also the wresting coach. Holding both jobs, he’s a familiar face around the CB campus — in fact, if you know him and see him strolling down the hallway, he expects a “Good Morning Mr. Eckel,” accompanied with a smile.

Not only is he known around campus for being the teacher/coach combo, he’s also quite famous for setting the fire alarm off at least once a year, but that’s besides the point. The Talon‘s here to showcase his superb coaching abilities.

Wrestling has been a part of Mr. Eckel’s life since he was in high school.

The cut from basketball began his four-year high school wrestling career. Well, that and the fact that he could compete with the best guy on the team.

“My first year, there was a kid that was really good on the team, and I didn’t beat him but I only lost to him by one point. I bragged to everybody that I was gonna beat him and so that got me going,” Mr. Eckel said with a smile.

He stuck with wrestling after high school while he was in the Coast Guard. His captain was a fellow wrestler and needed someone in the 145 pound weight class — Eckel was that guy.

He ended up coaching wrestling for most of his adult life. He’s coached for 17 years at five different schools: two schools in Washington, River City High School, Golden State, and Christian Brothers. He’s stuck with coaching for so long because wrestling teaches hard work, a quality he strongly advocates for.

Before coming to CB, he worked as a chemist in a lab, analyzing different matrices like water, gas, soils, and solids. However, he was always on call and wanted a chance to spend time with his family, so he decided to come to CB and be a teacher and wrestling coach instead.

Eckel values the lessons that wrestling can teach people, which is why he chose to coach upon entering the CB community.

“Wrestling really relates to life, whenever you have hardships,” Eckel explains. “Wresting is probably the toughest sport there is, there’s no question. You go out there, one on one, and it’s humiliating when someone actually beats the heck out of you and it’s gonna happen. You have to learn how to lose and walk away with some dignity, which isn’t easy. That’s helped me out in lots of different situations.”

He drills the idea of diligence into the student athletes’ heads, teaching the sport as well as giving life advice. Brady Sieving (’18) is one of Eckel’s wrestlers who can vouch for him. 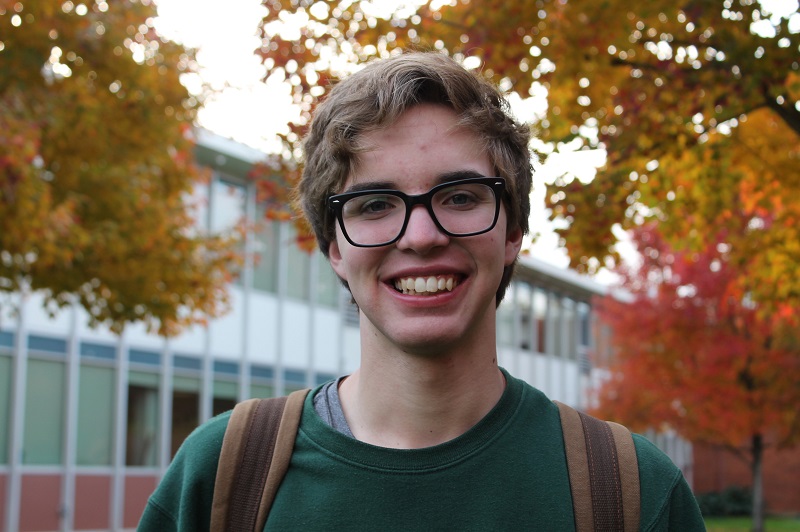 “He definitely wants the best for us in thick and thin, but he does that by working us to the bone. I’ve had days where I have to hold in throw up and I know I’m not even done with the work out,” the junior said. “I like a coach who works us and keeps pushing us until we’ve surpassed our limit.”

Brady admires the fact that Coach Eckel pushes them to go from drill to drill because that’s how wrestlers see improvement in themselves.

“He coaches us by making us work. He doesn’t beat around the bush; he goes from one drill straight to learning a new move or redoing a move. He does this because this is what is ultimately the best option and will give us the best results we need to succeed in our next wrestling match.”

Wrestling captain Owen Hunt (’18) has had Mr. Eckel as a coach for the past three years and spews nothing but positive comments. He admires how Eckel takes the opportunity to coach as a time to instill valuable advice in student’s growing minds. 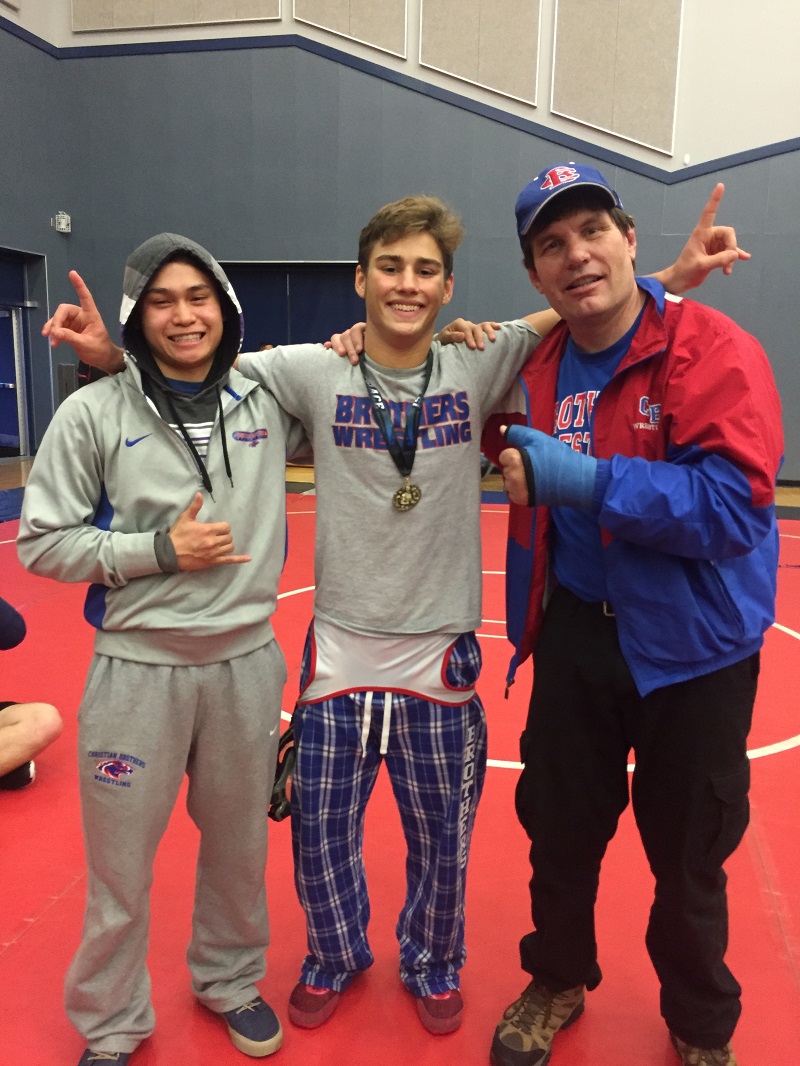 “[Eckel is] a jack-of-all-trades kind of coach. He is able to work us to exhaustion and condition us to our peak performance while teaching us the finer points of technique that help us become better wrestlers. He’s not an all-hard-work type of coach; he cuts loose and lets us have our fun. After a hard day’s work, we usually play a game.”

Even though Coach Eckel works them hard, he’s fair in rewarding them with kudos and cool-down time. Owen sees Eckel’s will to make his wrestlers the best. The coach instills motivation so his athletes can put their all into everything they do.

“He motivates his wrestlers by pushing them to their limits,” Owen explains. “He wants us to be our very best and have fun while we do it. He doesn’t want us to focus on winning, and that takes a lot of the stress and distraction of focusing on winning and puts it on the performance and becoming better wrestlers.”
Mr. Eckel’s motivation has paid off in Owen’s eyes. Already Owen has won tournaments, and the season has just begun. Eckel only wants to see his wrestlers succeed and makes sure he does all he can so they can win their next match or improve in their skills.

The famed science teacher instructs with the same method he coaches: hard work pays off. While he teaches perseverance on the mat, he teaches the same work ethic in the classroom. As a student of his, I get a daily dose of inspirational speech from Mr. Eckel.

“I want everybody to be better than me,” he says. “Every one of my classes, I take very personally. The better everybody does in there, the better that I feel. I like to think of my students as a reflection of me, and if everybody in the class does really really good, then I’m very successful, and I kind of ride on that.”
Mr. Eckel shares life stories with his classes to teach lessons — his goal is to ensure that we learn from his past.
Eckel doesn’t want us  “making any of the mistakes [he] made, not doing the stupid things that [he] did, because [he] made a lot of mistakes. If everybody does better and sees the mistakes that [he] made then [he] did really good.”
One of Eckel’s signature phrases is “Grades don’t matter.” He tells us this on the daily, so we stop worrying about our report cards and start worrying about the knowledge we pick up.
“It’s not that grades don’t matter; it’s that knowledge matters. If you know how to do chemistry, you can do anything. You get respected for having a degree in chemistry… it takes hard work to do chemistry, and it takes good organization, and good structure,” he claimed. “People will respect it, and it can take you as far as you want to go.”
Rose Turner (’18) is in Mr. Eckel’s Honors Chemistry A set and appreciates his work toward making his students better. 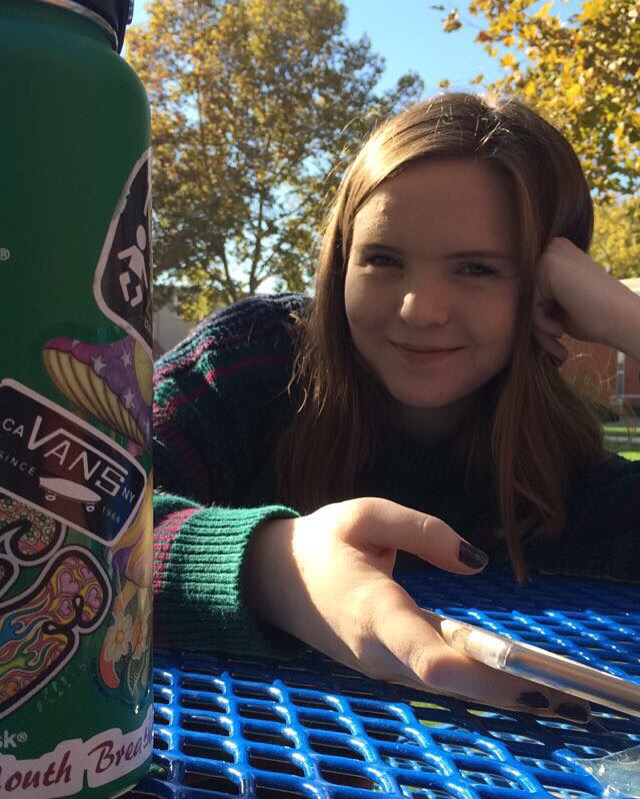 “He’s one of the greatest teachers I’ve ever had because he gives [students] so much more than just Chemistry. He gives us life lessons. Plus, he tries to get everyone to actually learn the material and teaches us that a grade is just a grade but the lessons are what’s important.”

Rose respects how much of himself Mr. Eckel pours into his teaching. Students relate to the life stories he tells, which inspire hard work. She also adds that he respects his students as individuals and shows his care to each and every one.
So is Mr. Eckel a wrestling coach or a life coach? Considering what he, his students, and his wrestlers have said about him, it’s safe to say that he’s both. On and off the wrestling mat, he spews encouragement. He may be hard on his students, but that’s to ensure that they become their best selves.
“Sometimes it doesn’t come across the way it’s suppose to,” Mr. Eckel concludes. “But I want [my students] to all be perfect because if they’re all perfect and I’m not, then I’ve [taken] a step up, so when I’m on my deathbed, I can say, ‘These guys are a lot better than I was.'”
The teacher and coach puts his students before himself. Eckel stays after school to tutor his Chemistry kids and then goes straight to practice. He gets home past seven most nights but still grades papers and replies to messages. Mr. Eckel is the epitome of education, the commander of chemistry, and the wizard of wrestling. Mr. Eckel is a wrestling coach and life advisor.
Tagged: Brady Sieving ('18), Chemistry, Mr. Bernie Eckel, Owen Hunt ('18), Rose Turner ('18), Wrestling
Share: