Tyler Green (’19): hardworking, humble, and a ball hawk mixed all together. The young sophomore phenom has impressed crowds, coaches, and most importantly, other football teams near and far. Tyler’s football career started in fourth grade. Just like most kids, he explored different sports to figure out what he liked and could prosper in. After playing football, […] 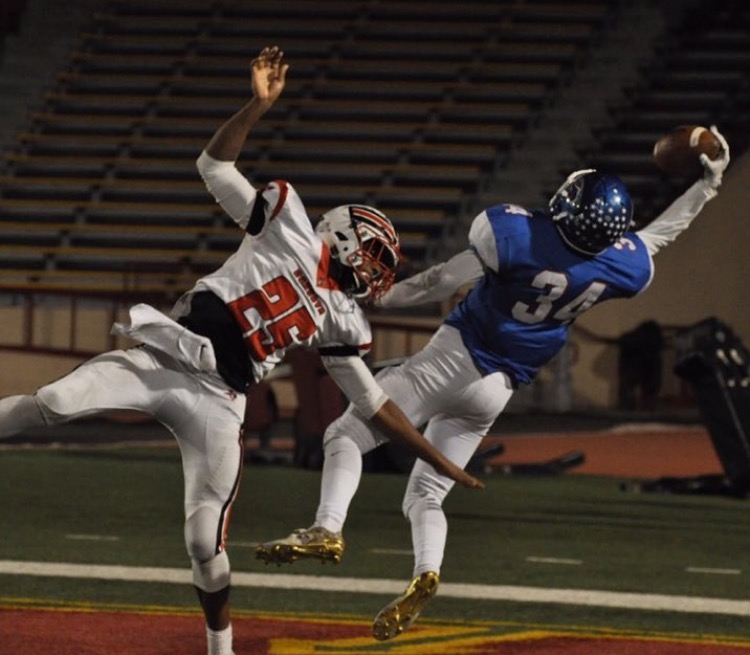 Tyler Green (’19): hardworking, humble, and a ball hawk mixed all together. The young sophomore phenom has impressed crowds, coaches, and most importantly, other football teams near and far.

Tyler’s football career started in fourth grade. Just like most kids, he explored different sports to figure out what he liked and could prosper in. After playing football, basketball, and soccer, he decided to continue moving forward with football and basketball. At that point in Tyler’s life, he had no idea that one of the games he loved would eventually turn into a life-changing experience.

After playing on Christian Brothers’s freshman football team last year, Tyler has worked his way up to the big dogs in a very short period of time. From scoring touchdowns and kicking extra points during his freshman season, he proved himself a valuable asset to CB.

Tyler now starts as a safety for the school’s varsity team. His hard work and devotion to the team on and off the field shows in his character and athletic performance, especially considering he is the youngest member of the team.

Tyler has recently been ranked second in California and sixth in the nation for his record number of twelve interceptions — about one a game! At only fifteen years old, the athlete has been recognized for things that many players only dream of. His success this season has brought pure happiness and abundant pride to all of the people helping him along his journey.

The star explained that he wouldn’t be where he is without the support of his mom and his coach Mike Blessing.

“The two push me in achieving all that I can,” Tyler declared.

Although many people have expressed their pride in all that Tyler has achieved, the humble athlete embraces himself on the outside much differently.

Instead of boasting about his accomplishments, he tries to push the credit off to his other teammates. Because of his willingness to always think of others before himself, his teammates have revealed how they feel about playing with Tyler and his importance to the team.

The Talon asked superstar Jamarri Jackson (’17) how he would describe Tyler’s overall attitude and performance.

“[A spitting image of myself] — he wants to be a playmaker and is not scared of anybody.”

From watching the duo play and witnessing the extreme chemistry between the two, you would assume that they’ve known each other and played together for years. However, it’s actually the opposite.

Jamarri mentioned how he had no idea who the athlete was until Tyler shouted him out on Twitter during the end of the 2015 season.

“Mine and Tyler’s relationship is the same as mine and [Jalen Swanigan ’15]’s my sophomore year. We get closer and closer each day, and Jalen was the senior I mentored, just as Tyler does to me,” Jamarri explained, shaking his head in astonishment.

Jamarri then said that he believes the sky is the limit for Tyler and he can’t wait to hear about what the sophomore accomplishes in his next two years. This says a lot about Tyler’s talent, considering Jamarri is a very experienced senior and knows what a good player looks like.

“I think the thing I am going to miss the most about playing with Pebbles [an inside joke between the two] is messing around with him and asking for his advice. We’re always dancing around at practice and having a good time,” Jamarri added with a laugh.

Tyler is not only a teammate to Jamarri, but a brother whose bond will never be broken. 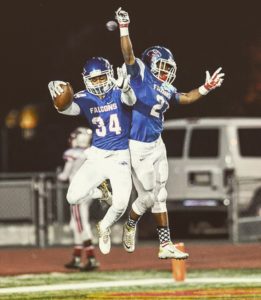 Tyler and Jamarri in action

Another vital asset to the team’s victories, quarterback Tyler Vander Waal (’17) explained that even though he came in as the new kid to the school’s football program, he was automatically able to predict Tyler’s outstanding athletic ability just by seeing him at the summer practices.

“The kid has swagger just like Jamarri and knows how to make plays,” Vander Waal shared. “If he gets the ball, there’s no doubt that the play will benefit us.”

Vander Waal then went on to explain that Tyler is one of the most humble people he knows and rarely takes credit for his success.

On top of being modest, Green’s attendance record was brought up in the conversation. It was explained that he has missed one practice over the course of six months, and that only happened because he wasn’t at school that day. Dedication, ladies and gentlemen.

Since many seniors will be leaving this upcoming year, a good deal of responsibilities regarding the future team’s success will soon lie within the sophomore’s hands.

Vander Waal had some advice to share with the rising leader.

“Make sure you always stay positive. You’re going to face good and bad things, but it doesn’t matter. The only thing that matters is how you react to them.”

From one player to another, the positive feedback regarding Tyler Green does not stop.

Co-captain Matthew DeSimone (’17) shared that playing with Tyler this season was something unforgettable.

“He had five interceptions in the first three playoff games, and that is just like — unheard of,” Matt affirmed, raising his eyebrows with an impressed look on his face.

Matt then went on to say that Tyler has excellent ball skills and extremely good instincts and reaction time in pass coverage.

“Tyler Green is the face of Christian Brothers football for the next two years,” Matt concluded.

In addition to the outstanding recognition from Tyler’s teammates, outgoing Head Coach Mr. Dan Carmazzi also had positive words to say about the player.

“Tyler was very skilled coming in, however also very coachable,” he described.”He has improved week by week and plays a great role in our team.”

Coach Carmazzi also explained that Tyler is the epitome of a multipurpose player.

“He is a starting safety, alternates at wide receiver, and has twelve interceptions as a sophomore,” the coach said with a sense of pure pride.

Tyler has brought many talents to the Christian Brothers field and will continue to offer up more as the years go by.

As the youngest player on the team, Tyler revealed that he does still get nervous before games. After hearing that the torch has been passed down to him by many different seniors, he explained that he needs to embrace this fact and not let anything get in the way of his goals.

Although the football team’s season recently came to an end, the past six months have allowed the team to share many long practices, victories, and most importantly, shape the future for the Christian Brothers football program.

From breaking many different personal records to breaking school records to reaching the section championship for the first time since 1986, the 2016 football season for Christian Brothers will not be forgotten thanks to many people, including Tyler himself. Although the season was full of countless impressive plays and games, one game specifically stood out to the players.

Matt DeSimone stated that he will never forget the first round of playoffs game against Cordova because of many different plays regarding Tyler’s performance.

“On top of three interceptions and a few touchdowns, he had the one-handed, Odell Beckham-style catch in the end zone for a long touchdown,” Matt recounted with excitement. “Tyler was the reason we won that game.”

“I think the best game I have ever played in my life was the one against Cordova,” Tyler agreed.

“Those three taught me that although I’m small, size doesn’t matter.”

Rather than discouraging one another, the team builds each other up. This quality life lesson shows the positive reinforcement from player to player on the Christian Brothers football team. The older-brother mentality between upper and lowerclassmen proves that the team is more than just a football team — they’re a family.

Although the football season is now over, life doesn’t slow down for Tyler. Instead of suiting up every day in full pads, cleats, and a helmet, the athlete will now throw on a basketball uniform and head to the court for his second season with the Falcons. From football to basketball, the young student athlete plans on continuing to push himself and his capabilities. Although there’s a long time until next football season begins, the grind starts up again really soon, and before we all know it, number 34 will be back on the field, astonishing everyone once again.

There is no doubt that the anxious sophomore will accomplish great things in the years to come. Tyler is an unstoppable athlete who is just beginning to form his unlimited future. From his humble mentality to the “Hit Squad” wristband he has rightfully earned through his defensive actions, Tyler is full of surprises and will intercept new ones at any chance he can. Watch out world, we have a star on the rise — straight out of the Christian Brothers community, the new regime of Tyler Green is here.