Art enthusiast Mr. Kevin McGovern ’74 has influenced CB greatly. He spends his mornings creating an open environment for students to show off their creativity with no anxieties. The Talon interviewed Mr. McGovern, his daughter Mo McGovern (’17), his co-worker Ms. Christine Kerr, and his former art student Olivia Ortiz (’18) to discover the depth behind Mr. McGovern. Being a […] 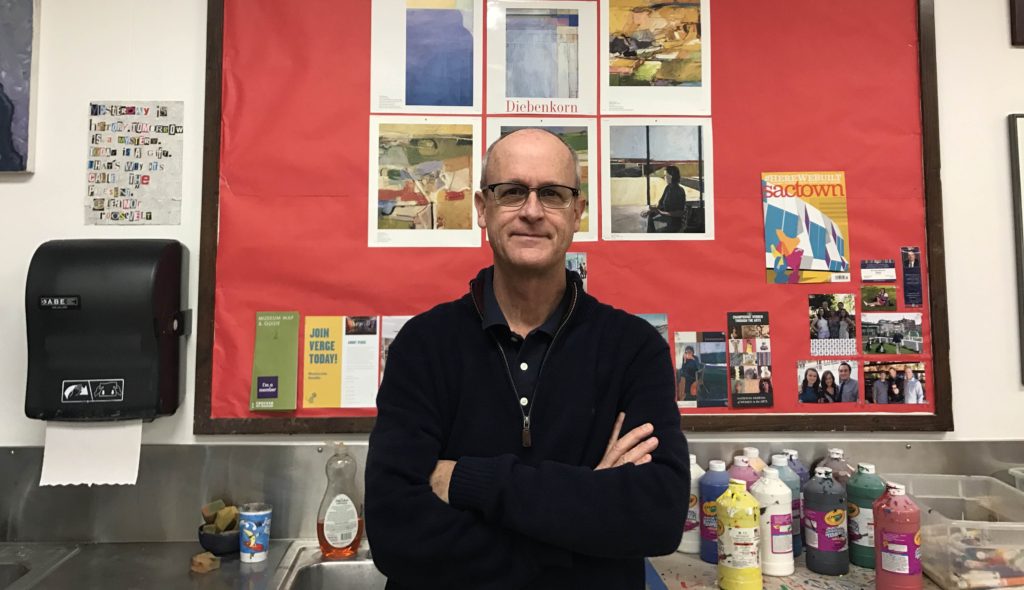 Art enthusiast Mr. Kevin McGovern ’74 has influenced CB greatly. He spends his mornings creating an open environment for students to show off their creativity with no anxieties. The Talon interviewed Mr. McGovern, his daughter Mo McGovern (’17), his co-worker Ms. Christine Kerr, and his former art student Olivia Ortiz (’18) to discover the depth behind Mr. McGovern. 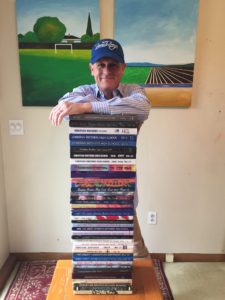 Mr. McGovern with his 40 CB yearbooks (including four from when he was a student). Photo taken by Mo McGovern

Being a teacher and a painter gives Mr. McGovern the ability to show that he’s an experienced artist still in practice.

“When I started teaching art on a full-time basis, I thought it was very important for me to be a working artist so that my students would see me…teaching art but [also] painting and having shows of my own work.”

You can only catch Mr. McGovern on campus during two sets, A and B. His lighter schedule still gives him plenty of time to be with his students on a daily basis, but he also has the chance to focus on his art after school.

“Now that I’m part-time, I do feel like I have enough time for my painting.” 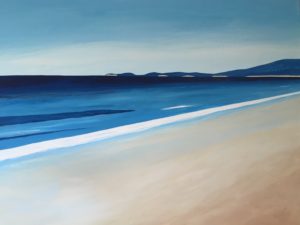 “Last spring, I had a showing of my paintings in East Sacramento,” he shared. “The show went really well…I sold a number of paintings and more importantly, a lot of my friends showed up to the opening reception and we had a great time. The reception is the fun part about an art show.” 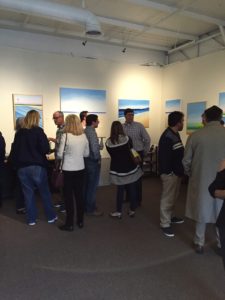 One of his most exciting shows was in the spring of 2002.

“I got to be a part of the final show at the Artists Contemporary Gallery. At the time, the ACG was the top gallery in town.”

As he got to the reception, he realized that he was showing in the same room with Wayne Thiebaud, Greg Kondos, Larry Welden, and many of his other heroes in Sacramento art. This was a momentous event for Mr. McGovern’s artistic career.

Mr. McGovern also introduced CB’s La Salle Art Exhibit in 1993. The exhibit shows student work and has been held every spring since then. He had no idea how much of an impact that he would make on the art department but is glad on how far it has come.

He has dedicated 36 years to CB and has enjoyed, managed, and added to the art department. His respect for art and for his students is looked at with great honor.

“What’s great about CB is the students,” he says. “I don’t think I could teach anywhere else in Sacramento and have such great students. They’re nice, cool, and respectful — and they really seem to put up nicely with my preaching about art!” 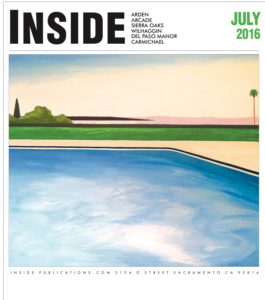 One of Mr. McGovern’s pool paintings on the cover of Inside magazine. Photo submitted by Mr. McGovern

By the end of the year, students come out of McGovern’s class with a new prospective on art — some of his students have even become famous. One being Bobby Podesta ’93, a wonderful artist who has featured in the making of A Bug’s Life, Toy Story 2, Finding Dory, and Cars 3. Mr. Podesta and Mr. McGovern still keep in contact.

“Whenever [Bobby] hears about the latest exhibit we’re having or a new class that we’ve added to the curriculum, he asks me, ‘Hey, why couldn’t you have had that when I was there?’”

The students and staff look up to Mr. McGovern. Co-worker and art instructor Ms. Kerr appreciates having such a wonderful roommate and friend.

When Ms. Kerr and Mr. McGovern found out that they were going to be sharing a classroom, he was very welcoming and even cleared a couple top shelves for her. They were soon to find out how compatible they are together.

She further explains that he keeps the room organized and communicates with Ms. Kerr, creating a good working environment.

“He has so many good qualities as a teacher and as an individual, which helps create such a pleasant atmosphere in class,” she says.

He shares a passion with Ms. Kerr for art and for the students. He wants the best for them and to watch them grow, just as he has with the school and art department.

Mr. McGovern is naturally amazing at creating a good space to learn and expand.

“You want creativity to flow, and if you have a repressive environment, the students aren’t going to take risks.”

As a sophomore, I transferred into Mr. McGovern’s class, and he was very welcoming. Each day, I looked forward to A set. The 45-minute class period helped me meditate and get my creative thoughts going. I’m not very experienced with art, but Mr. McGovern helped me get over my anxieties. He was nice, helpful, and helped me work toward improvement.

Olivia and I were in the same A set. She believes that Mr. McGovern’s art class was a very relaxing time.

“It allowed a small break in the school day to be creative and really appreciate art. On top of that, he’s such a nice person, so coming into class was always a positive experience. He didn’t make anyone feel like they were bad at art because he didn’t view anyone as bad.” 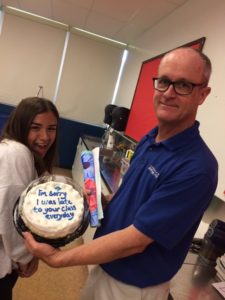 Olivia Ortiz giving Mr. McGovern a cake that reads, “I’m sorry I was late to your class every day”

Besides art, he taught us many things — including how to appreciate animation and architecture. Olivia describes how he got us to pay attention to detail and really admire the little things.

“He would point out how realistic the water in Finding Nemo was, or comment on the mood of a building; he was truly introspective.”

“He made the class enjoyable by the way he interacted with us and commented on our art. Everything he said was positive and was to benefit us as artists.”

She also greatly enjoys the creativity in his art.

“His subject is usually a pool, which I find to be extremely creative because who knew pools could be painted in so many different ways?”

Mo, Mr. McGovern’s daughter, is usually assumed to be an outstanding artist but is more focused on video and makeup for her creative outlets. People who like him are always telling Mo how funny he is but don’t normally realize that they’re related.

When she was little, she would go and paint with him in his studio and bonded over creating art together. She has definitely experimented with drawing and painting because of him. 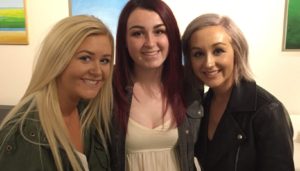 Mr. McGovern’s daughter, Mo, with her sister, Shannon on the right and her friend Emily on the left. Photo taken by Mr. McGovern

Mo often supports her dad by going to his art shows.

“It’s really cool to see your dad in an art museum. I’m so used to seeing the paintings at home, [but] then to see your dad next to so many famous paintings — it’s very interesting because he isn’t just an artist to me.”

Having an artist and teacher as a father gives Mo the best of both worlds.

“A lot of times, he gives me words of wisdom. He always encourages me and lets me know that I’m capable of anything and that he believes in me.”

Mr. McGovern has definitely made CB’s art department the place to be.

If you would like to see more of Mr. McGovern’s art, check out http://kevinmcgovern.blogspot.com/?m=1