You are here: Home \ Arts \ Falcon Features \ Featured Posts \ The Cherry On Top Of The CB Sundae
Arts
0

The Cherry On Top Of The CB Sundae

Some know Jacob Cherry (’18) from his several appearances in the CB theater. Some may see him walking through the halls. Some may not know him at all. But do you really know Jacob Cherry? There is no better place to begin discovering that than with some cheesy get-to-know-you facts. Jacob Adam Cherry was born […] 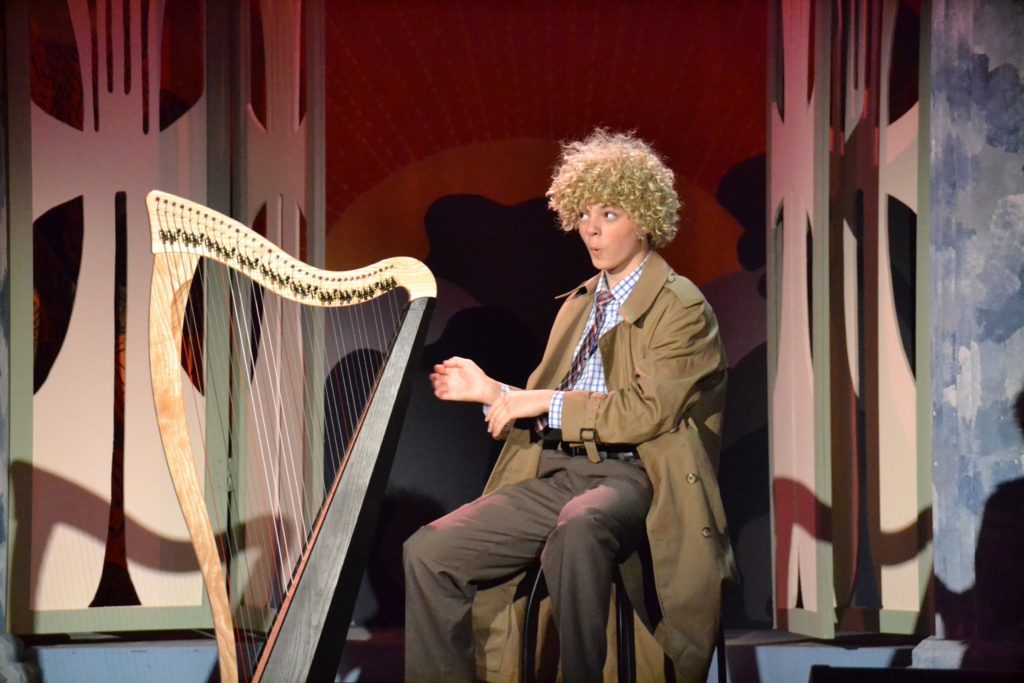 Some know Jacob Cherry (’18) from his several appearances in the CB theater. Some may see him walking through the halls. Some may not know him at all.

But do you really know Jacob Cherry?

There is no better place to begin discovering that than with some cheesy get-to-know-you facts.

“Very sadly, I’ve never owned one. I’ve always really wanted to, so the moment I’m out of college and in my own place, I will definitely be getting one,” he adds.

“But as for non-pet favorite animals,” he states, “ I’d choose a giraffe or a walrus. I think they’re cool.”

His favorite fruit, interestingly enough, is not the cherry. He lists strawberries, oranges, and grapefruits with sugar among his preferred fruits. Jacob’s favorite subject is history.

“I’ve always loved American history, during and before high school,” he says. “It’s my favorite subject this year. It’s always really fascinated me and it’s not ever confusing like math or science. Since the third grade when I bought a book on US presidents and memorized them, I’ve always been really interested in it, especially the Revolutionary War era through the Civil War era.”

He collects Monopoly board games. His favorite genre of music is Christmas. He transferred into St. Mary School in seventh grade before coming to CB for high school.

“My classmates had known each other for years. And yet they made me feel just like one of them. I didn’t know what to expect coming in,” he states. “That was my first time changing schools and my first private school. But I really felt like everyone was my friend.”

While there, he participated in Academic Decathlon and was co-valedictorian of his class. But what he’s famous for around CB — acting — piqued his interest long before the seventh grade.

In fourth and fifth grade, he learned that he really enjoyed it when he got to do class projects that involved acting and playing other characters. He recalled that when his class was learning about the Gold Rush, they did skits to help them remember certain people and events.

“I was in a skit about a Gold Rush thief named Joaquin Murrieta,” he said. “I loved saying his name, and I got to do that a lot because I played his trusty sidekick, Pedro. I had a lot of fun with it even though it was like a three minute scene at the most.”

“In fifth grade, my teacher was a part-time actress, and she loved putting on skits in class,” he recalled. “She even put on a 45-minute Hamlet play, starring fifth graders — very ambitious. But my whole class was really into it and we had rehearsals after school. It’s kinda weird looking back on it because it wasn’t a school show or anything. It was just her class performing in a Shakespearean tragedy that we practiced for months on. I played Horatio, Hamlet’s sidekick.”

But even though he was famous back in fifth grade for his talent, he feels that his true theater journey began his freshman year when he joined the cast of the CB production of Street Scene as Charlie Hildebrand, a New York kid being evicted from his apartment.

“Ever since then I’ve grown as an actor, and the people I’ve met along the way through CB theater have been incredible,” he stated. “They have absolutely changed my life for the better, and I will be forever grateful for all of them.”

His all-time favorite role and show have been brought to him by CB Theater.

“By far my favorite [role has been] Harpo Marx from Animal Crackers,” Jacob exclaimed. “He’s the most iconic character I’ve ever played. I knew from the moment I first saw a scene of him in the movie that he was the one I wanted to play.”

“There was such a uniqueness to him and such an energy about him that I loved. He was hilarious and expressive and I loved him so much. When I got cast as him, I was so happy. I loved every second of playing that mute, lovable harpist.”

He was even nominated for an Elly — a prestigious award in the Sacramento theater world — for his fabulous performance as Harpo. 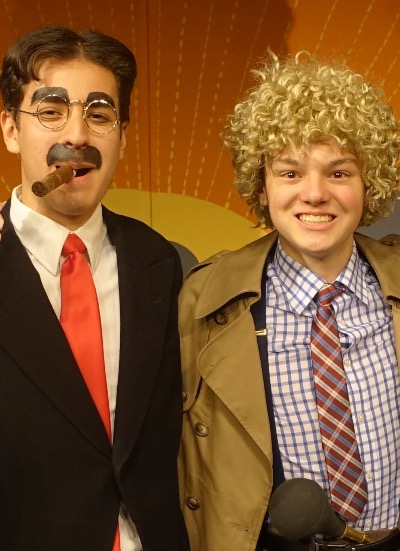 Jacob as Harpo, with Tony Rodriguez ’16

“And I also loved the show because of the people in it, of course. We all got along so well and had lots of fun,” he added.

He also acts outside of CB in the theater company Flying Monkey Productions.

“My friend Ian Ferrell (’17) invited me to join a youth theater company that he was in,” Jacob explained. “They had already cast the show, but they needed another actor to play a small part of a Senator. I knew very little about it, but I was on board because I had seen three shows from the company that Ian had been in and I wanted to join it.”

“I really enjoyed working with this new group of people. They were very welcoming and made me feel like a part of their family. I made new friends and it was great. After that show closed, though, it was different than having a show at CB close because I didn’t get to see these FMP people every day afterwards.”

“I missed them and I knew I wanted to return and do more, but it was hard with school shows getting in the way of that. I enjoyed their next musicals as an audience member. And then in the summer, I became the stage manager of Heathers: The Musical.”

The junior does anything he can to be a part of the theater process, from working on stage to watching in the audience to managing backstage. His drive to be a part of something bigger outside of CB shows in his dedication to FMP, and to acting in general.

“I love acting more than anything else,” he states, “ I know I want to do it for the rest of my life.”

“But why do I love being on the stage and pretending to be someone else so much? It’s a difficult thing to explain. But there’s nothing I get more joy out of than putting a story together and creating a character and giving them a life. I love making the audience get a reaction or just feel something. It’s so important to make people laugh and to make them feel joy. Maybe they’re having a rough time and this is just the thing they need to be happy.”

Ian Ferrell, the friend that invited him to join FMP, was one he made at the beginning his CB theater journey.

“We became friends partly due to the fact that our characters were best friends in the show, so we got to hang out a lot on and off stage,” says Ian. “From there, we just got to hanging out a lot outside of theater, and became really good friends.”

Similarly, this is how Jacob became friends with Jenn Roberts (’18). Both feel that being friends with Jacob and working with him are lovely experiences.

“He is an angel in human form,” states Jenn. “He is a fantastic human being that can put you in a good mood just by being JCher.”

“It’s always great working on shows with him, because I know that I can trust him 100%,” Ian shared. “I know that he won’t mess up his lines, miss his cue, or accidentally do the wrong action on a stage, and it’s very reassuring to work with someone who knows exactly what [he’s] doing on the stage, and how [he’s] doing it.”

“He is so insanely dedicated to whatever part he is playing. He will always give 120%, so it’s always fun to work with him,” adds Jenn.

Another person who met Jacob in high school is Colin McCarley (’18). Although the two didn’t become friends over a shared love of the stage, their friendship showcases a funnier side of Jacob’s personality.

“We constantly argue over the best breakfast meat as a joke,” says Colin. “Whether it’s sausage or bacon. He took the sausage side since my nickname is ‘Bacon.’”

“He is very loving and kind and will always make you laugh no matter how you feel,” Colin adds.

“Jacob is exceptionally hardworking and dedicated to his friends,” the junior said. He’s also passionate about both acting and adding humor to people’s lives.”

He and Jacob met and became friends when Jacob transferred into St. Mary in seventh grade.

“I’d heard about him from my stepsister beforehand, though, because they went to the same elementary school. We got to be really good friends through academic decathlon that year and the following year.”

Contrary to those above, Delaney Bird (’18) and Jacob have actually know each other for pretty much their entire lives.

“Our dads are really close friends; in fact they’ve been friends since they were in high school at CB,” she states.

But similarly to everyone else, she describes him as “one of the most genuine people you will ever meet”.

“He is incredibly funny and a blast to hang out with,” Delaney says. “He’s that kind of person that nobody can dislike; he’s just too nice and charming.”

“He’s also an amazing friend,” she adds. “Sometimes he’ll just text me out of the blue with some hilarious and random thing, and it always brightens my day.”

For instance, when they went on the history field trip to San Francisco last year.

“He sneakily took pictures of the various weird faces I was making throughout the day,” she says. “The new iPad update does this thing with photos where it will make a slide show kind of thing if you have a lot of photos from one particular day. Well he had a lot of photos of me from that day, and the iPad just put together this presentation of all my horrible faces from that day and set it to sappy music and he texted it to me and it was the most hilarious thing ever. I still have it saved.”

But whether you’ve known him your entire life or just for a few years, there is no way to not see just how amazing Jacob really is. He always know how to make everyone smile regardless what mood they started the day in.

He truly is the Cherry on top of the CB sundae.