Morgan Price: Her Pitches Will Leave You in Stitches

Morgan Price (’17).  Some might know her as the amazing artist. The girl with 10/10 makeup. The girl who hits the whip every time. But just about everyone knows Morgan as the girl who plays softball. Morgan lives for softball. The sight of those neon yellow softballs and the smell of freshly cut grass have […] 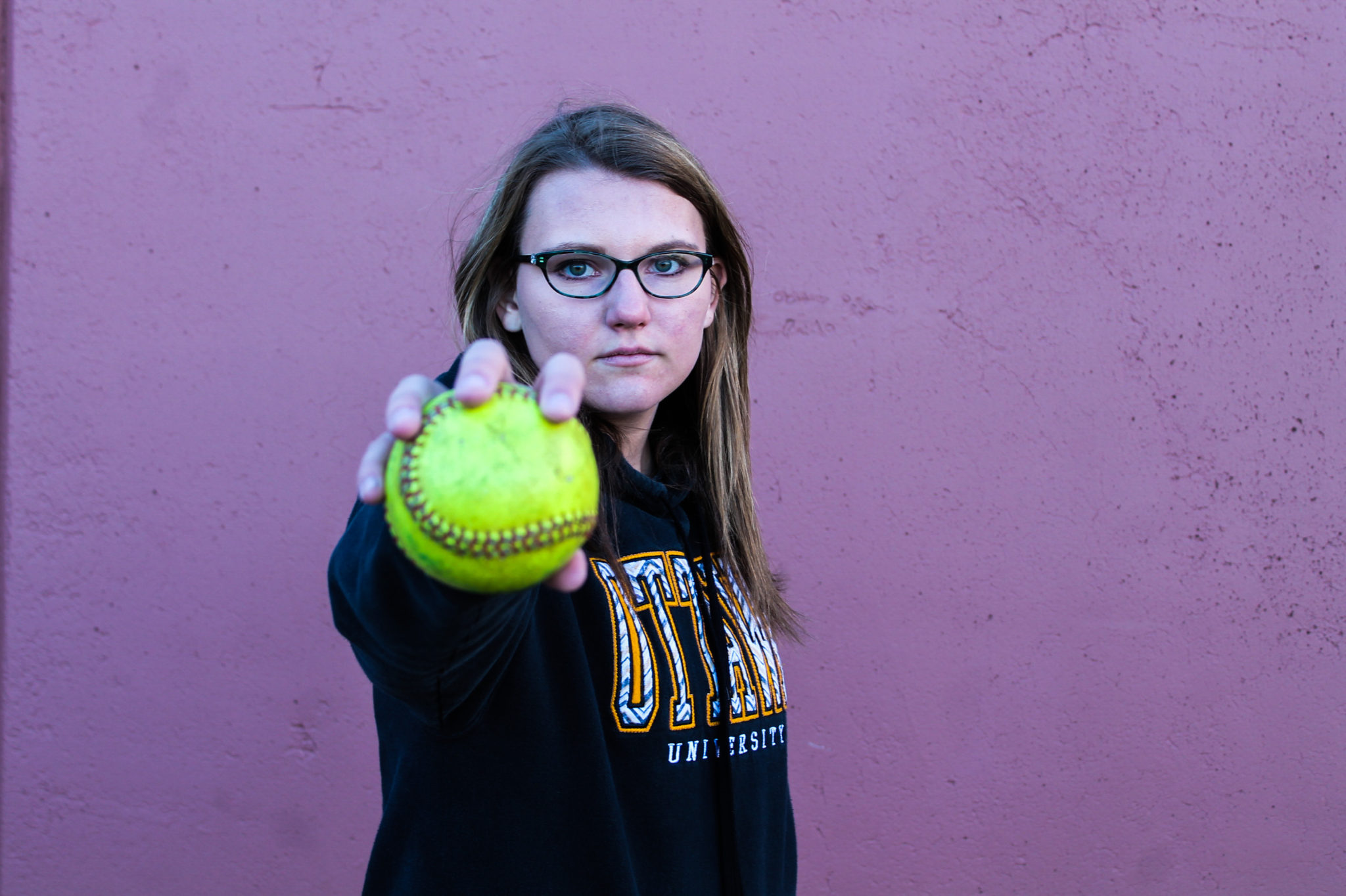 Morgan Price (’17).  Some might know her as the amazing artist. The girl with 10/10 makeup. The girl who hits the whip every time.

But just about everyone knows Morgan as the girl who plays softball.

Morgan lives for softball. The sight of those neon yellow softballs and the smell of freshly cut grass have been in her life since she was about six when she began to play little league softball by mistake.

“I actually did soccer way before,” Morgan says. “When my parents wanted to sign me up for another year of soccer, they missed the deadline, so they just signed me up for softball instead!”

However, this happy accident has given way to more than just an amusing anecdote. Morgan has played softball every year since and has signed to play softball at Ottawa University in Kansas for the next four years.

Morgan’s mom, Mrs. Cathy Price, does express a bit of worry in watching her daughter play.

“The biggest fear for me is her face. So, we’ve prevented that by having her wear a face guard when she pitches. It can be scary to see a ball come directly at her.”

However, Mrs. Price is confident in Morgan’s safety.

“She has pretty good reflexes. Other than that, as long as she stays in shape and plans accordingly, she can prevent most injuries. So far, she’s been lucky and can continue to stay out of harm’s way.”

For anyone not familiar with the sport, the name “softball” is deceiving. This is not a sport made of flowers and candy. Morgan can throw a softball at about 60 mph on a good day, which is about the speed an adult cheetah can run, or the speed of a car on the freeway. Now, imagine that 60 mph softball being thrown at you from 43 feet away. Injuries happen often.

Morgan can often be seen displaying minor cuts and bruises after a long weekend tournament. Aside from the pain and discomfort they bring, the injuries become a source of frustration when they prevent someone from doing what they love.

“I cannot tell you how many times I have been hurt, then I’ll just pick up a glove or toss a ball, and I get yelled at, just because they don’t want me to get more injured,” the senior says ruefully. “Softball is my life; when I’m hurt, it’s a weird feeling. It sucks, and I want to be out on the field.” 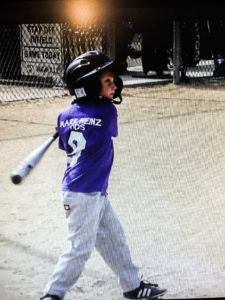 Morgan began her journey playing T-ball and rec league when she was young but quickly gained a serious interest in the sport. She then transitioned to travel ball, which was much more competitive, giving Morgan the opportunity to face players with much more drive and skill.

“I love it so much more because I have to work harder and fight for a spot on my team every season. I also get to travel, so I’ve had the chance to go to Las Angeles, Las Vegas, Reno, Colorado, Oregon, and maybe Texas later this year for tournaments.”

Morgan’s love for softball grew as she found a role model that motivated her to dream big. As a kid, she would admire Danielle Lawrie, a pitcher for University of Washington, Morgan’s parents’ alma mater.

“I wanted to do what she did, and become a pitcher,” Morgan recalls of her younger days. “[Lawrie] was always the best person on the team, a real leader and great person.”

So in 2009, when 10 year-old Morgan watched Danielle Lawrie lead her team to take the Division 1 Women’s College World Series, Morgan promised herself that she would win a college championship.

When she came to Christian Brothers, Morgan was the only freshman on the Varsity team and has pitched Varsity ever since. The Head Softball Coach at CB, Mr. Chad Clay, explains what makes Morgan stand out from other players.

“Morgan is one of the most hardworking players you’ll ever meet,” he said. “She never settles; she always pushes herself to practice harder and do better. She knows how to work and get things done.”

As Coach Clay discovered, Morgan is more than raw talent — she has the determination to make herself a strong competitor on the field. 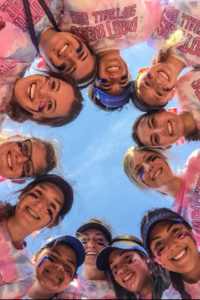 Morgan and the CB softball team at the Albie Aware game.

“Morgan is a great player to begin with and is very talented. But softball is kind of like school: you can’t just stay on the same level, you have to improve and get better. So Morgan got a pitching coach and has improved like crazy, and continues to improve.”

Softball became a huge part of Morgan’s life, and she has dedicated much of her time to games, practices, and private hitting and pitching lessons.

“If Morgan ever quit, I would mostly wonder what she would do with all her extra time!” says Morgan’s cousin, Alison Bondy-Villa. “But Morgan is not known to quit things, and she is very passionate about softball.”

But in 2014, Morgan met an obstacle that made her question her love for the sport.

“I just wasn’t having fun anymore,” Morgan admits. “I wanted to do college softball so bad, but I just wasn’t getting recruited or even noticed by colleges.”

But Morgan is not one to give up easily. She made the difficult decision the quit the Lady Demons, the travel team that she had played with since she was nine, and look for a new organization.

“For that first team I was on, those girls were like sisters — they still are,” she reflects.

It was incredibly hard for Morgan to leave the team, but the change has proved to be the right choice.

“I had a new outlook, and I realized that [softball] was still something I wanted to do and continue with my dream of playing in college. So the change kind of rekindled that.”

Morgan found her love for softball again and met great people on her new team. She even chose to live a healthier lifestyle, losing thirty pounds by eating better foods and exercising more often. And her dream to play college softball really took off. Because of the switch to the team Foothill Gold, Morgan received better exposure to college scouts. 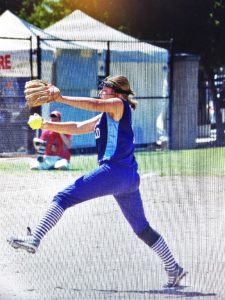 Morgan winds up for a pitch.

It wasn’t long before Morgan’s stellar pitching and humble attitude caught the attention of several colleges, one of which was Ottawa University.

“I was at a tournament in Las Vegas, and I was pitching, and the Ottawa softball coach saw me.”

Morgan quickly became interested in the small university, and before long, arranged a visit to meet with the other coaches and tour the campus.

“I went to Ottawa, and immediately I thought that the coaches were super nice, the pitching coach especially — very welcoming,” she says, instantly impressed with their softball program.

Morgan also found herself in love with the friendly atmosphere of the students and the Midwestern charm of Ottawa University.

“I got to meet the girls on the team and stay in their dorms. They took me on a tour of the campus and included me in all of the activities. They made me feel like part of a family.”

Initially, Morgan’s mom had some reservations about sending Morgan so far away.

Upon visiting Ottawa University, Mrs. Price had a change of heart.

“It’s perfect; I think a small-sized school is better for Morgan. And I met with the coaches, and they were all great people. So after we spent a couple of days there, I told her on the way back that, after I had been there, I supported her decision if she wanted to go there. I thought it was a good fit for her.” 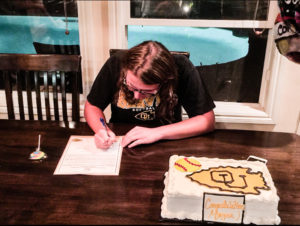 On September 3rd, 2016, Morgan signed to Ottawa University. Though she considers herself lucky to skip all of the stress of college applications that most seniors are experiencing right now, Morgan does hold a bit of fear as she looks toward the future.

“The only store in Ottawa is a Walmart,” she laughs before becoming more serious. “I am scared. It’s going to be weird being super far away from my family.”

But always the optimist, Morgan is still very exited at the idea of playing softball in college.

“All of my friends who have gone to the Midwest for softball have told me that it’s great. So I’m excited, but I’m kind of nervous.”

“It’s bittersweet,” says Alison, who will surely miss Morgan. “I’m sad because I know I’ll see her less frequently once she moves away. But in no way does that overshadow how proud I am of her for getting to where she is today.”

Ten years of softball have shaped Morgan into the person she is both on and off the field. 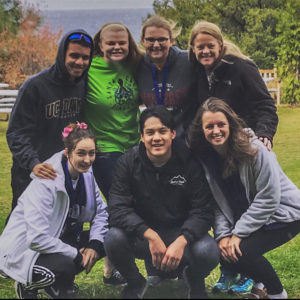 Morgan with her Kairos group.

“Playing softball has really helped me with time management, because I leave home, go to school, and then go to softball almost every single day. Not only that, it’s also helped me with leadership skills, like learning to communicate with others,” Morgan explains. “When you’re the pitcher, you’re like the leader of the team.”

And it’s not hard to see how these lessons have come into play in Morgan’s life. Even with team practices and individual lessons throughout the week, as well as long-distance tournaments on weekends, Morgan has managed to maintain high grades for the last four years. She’s also a part of the Student Retreat Leadership Team and Campus Ministry and was a Kairos leader in October.

Throughout the many ups and downs than Morgan has experienced in her life, softball has given her a constant source of inclusion and self-improvement.

“I feel like it’s not the same; there’s always something new,” says Morgan. “I think that if I wasn’t pitching, I would have quit. I love pitching, and I love being a part of the play every game.”

Playing softball, which has been such a big part of Morgan’s life, will likely be over after college since professional softball doesn’t exist. However, Morgan hopes to coach travel ball or high school softball as an adult to help spread the same love for the sport and life-changing experiences that she has gained.

Morgan’s friends and family are proud of the person Morgan has become. They’ve watched her blossom into a very talented and determined young adult.

“Morgan has proven countless times how dedicated she is to her commitments. And her hard work has boosted her confidence both on and off the field,” comments Alison, unable to hide her pride for her cousin. “She’s one of the most hardworking people I know, and she deserves to be recognized for her efforts.”

Morgan’s parents also give her some love.

“You’re always proud of your kids’ accomplishments as a parent. She’s worked so hard for many, many years. It hasn’t always been easy, and there were times when she was fed up and tired, but [she] endured anyways. I saw a saying the other day; it was, ‘She believed she could, so she did.’ I think that really fits Morgan. She said she would play softball and go to college, and now she’s doing both.” 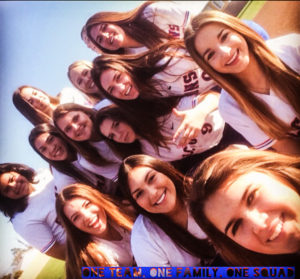 The CB softball squad is all smiles!

Morgan has come a long way from the six year-old who expected to play soccer. Or the ten year-old watching her role model win a college softball championship. Or even the sophomore who made the tough decision to change teams. Now she’s the senior who, after years of hard work and sacrifice, will play softball for a college she loves.

And she wouldn’t have it any other way.