Marcus Cepeda: The Face Of CB

Marcus Cepeda (’17) is the captain of the CB men’s volleyball team. He made and was featured in our annual Admissions video. He’s spoken to multiple schools about CB and was chosen as a Student Speaker for Open House this past fall. He’s represented Christian Brothers through Campus Ministry, KBFT, the Minivan Club, and even […] 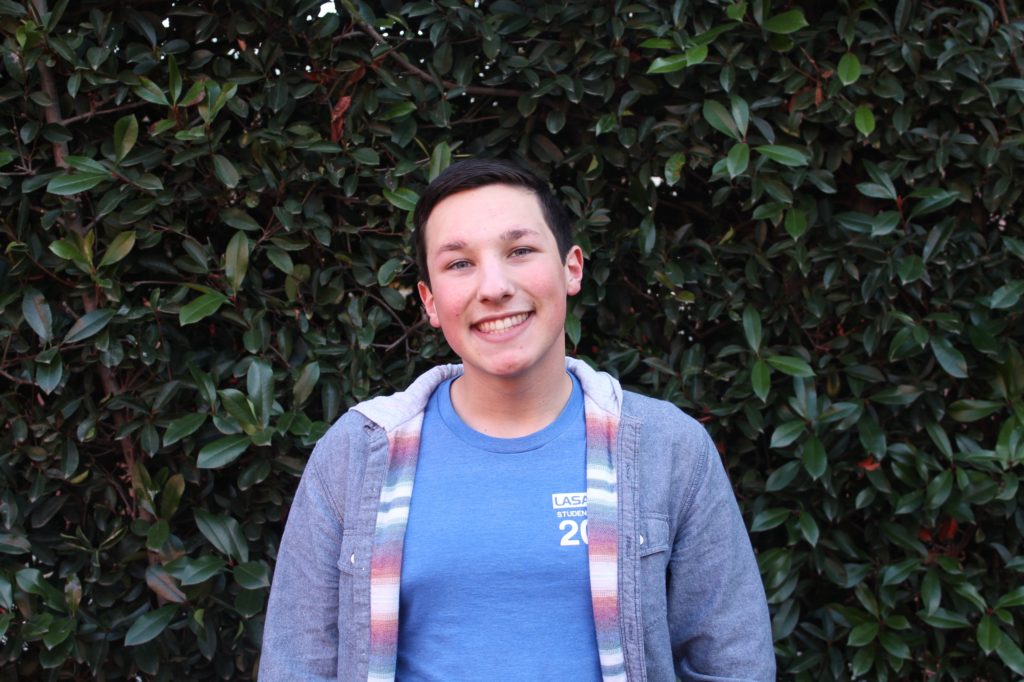 Marcus Cepeda (’17) is the captain of the CB men’s volleyball team. He made and was featured in our annual Admissions video. He’s spoken to multiple schools about CB and was chosen as a Student Speaker for Open House this past fall. He’s represented Christian Brothers through Campus Ministry, KBFT, the Minivan Club, and even Live Sports Broadcasting. This student-athlete is more than just an exceptional ambassador — he is the face of CB.

In 2013, Marcus was debating his transition to high school. He planned to attend Jesuit High School that upcoming fall as a “man for others.” But as time cleared the path ahead of him, he found his feet on the soil of “the place to be.”

At the beginning of his journey at Christian Brothers, Marcus found the waters a little unsteady. Coming from a St. Robert’s School, Marcus didn’t know where to find his place at CB.

“I was definitely really worried about fitting in, because at St. Robert’s I had been the guy that everyone knew,” Marcus confessed. “I was focused on trying to be who people wanted me to be.”

As he looked back on freshman year, Marcus said that the biggest thing he lacked was self-confidence.

“Who cares what [I] looked like?” he said. “I was bigger since I didn’t play sports; I felt that I didn’t look as good as some of the other ‘popular’ guys, and I felt like I was missing something.”

“That year made me realize that it’s character that makes a good person, not their looks.” 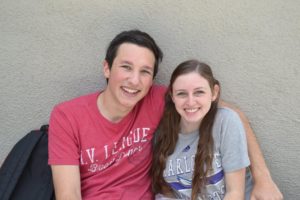 In sophomore year, Marcus became a Lasallian Student Ambassador. But at the beginning of the year, he still lacked that self-confidence. When he was first offered the position, he says, “I didn’t care about [interviewing for the position]. I didn’t show up for the interview the first…or second time. On the third, I finally interviewed.”

Through this position, Marcus discovered all that CB had to offer. His love for the school grew abundantly, to say the least.

During the same year, Marcus, along with the rest of the Class of 2017, lost a brother named Spencer Pershall (’17).

“Spencer and I weren’t best friends, but we were always the guys in the back of the class who were talking and laughing,” Marcus reflected.

According to Marcus, “Spreading Love” and CB’s Inclusive Community go hand in hand.

“Spreading love, to me, means appreciating people for who they are instead of what they do or what they look like. It’s recognizing that they’re a person,” he said. “It’s humanizing people; it’s loving someone because they are themselves.”

During his junior year, Marcus began to find his place. He was fully committed to KBFT, men’s volleyball, Campus Ministry, and of course, his position as an Ambassador. He expanded his friend group and focused on his grades even during the hardest year of school. During this time, he also worked closely with a few staff members, like KBFT instructor Mr. Brendan Hogan ‘95 and Men’s Volleyball Coach Mr. Polo Lopez ‘08.

Marcus shared a few things that he has gained from these role models.

“[Mr. Hogan] taught me that when there’s something you want, go and get it.”

Marcus says that Mr. Hogan really emphasizes that “the most important thing to do is to not think you can’t do it — it’s to know that you have the ability to.”

Marcus took this lesson home when he concluded that Hogan taught him that “dreams can become a reality if you put in the effort,” meaning that “effort is how you become successful.”

Coach Polo emphasized this lesson, teaching Marcus that “working harder gets [him] further,” which encouraged Marcus to keep playing volleyball and later become a captain.

As a captain, Marcus believed that he was “the 7th best player on the team.”

“I could name six other better players than me,” Marcus said. He has taken no totem-pole approach to the leadership position, which shows his humility — both on and off the court.

Marcus’ place at CB would soon start to become even more crystal clear. He became a true leader on campus, and it all started in the summer leading up to senior year. First was attending Kairos, then a camp for Lasallian Student Leaders (LSL), and finally a retreat for members of the Senior Retreat Leadership Team (SRLT).

“Marcus has matured within himself, and he is a great example of what it’s like to be a Christian Brothers student,” the Assistant Director of Communications says.

During LSL, Marcus was recognized for his Lasallian qualities, something that is very special to him.

Marcus reflected on all of the great memories of LSL. From leading the Video Committee at camp, to creating the recap video for the whole program, Marcus couldn’t have done it alone. 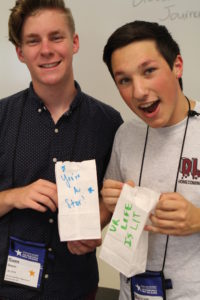 Sam claims that Marcus is a wonderful example when it comes to an ideal friend.

“[Marcus] cares more about his friends than he does for himself,” the senior shared. “He chooses to be selfless over selfish.”

“When we stayed up all night to work on a recap video for LSL, I learned that [Marcus] is incredibly patient, open to new ideas, and holds many creative ideas himself.”

As the summer of 2016 began to close, Marcus attended the SRLT retreat in Lake Tahoe. 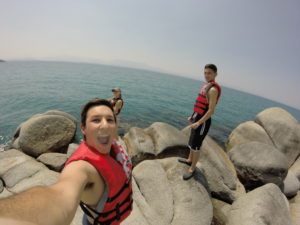 Marcus claims that with his position on the team, he tries to “fix what I was freshman year.”

“I can be that person to teach younger kids the importance of being themselves and participating,” he stated.

Today, Marcus Cepeda is a thriving senior. One of the biggest milestones of his high school career so far has been winning Homecoming King.

“When I was nominated for [Homecoming] King, I didn’t think I was going to win,” he claimed. “ I am not very social outside of CB; I don’t have conversations with everyone who voted for me, so I was really surprised — and grateful.” 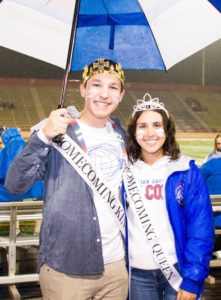 Another milestone of Marcus’ senior year has been the creation of the amazing admissions video. Not only did he help put the team and video together, but he was also featured in it!

Assistant Admissions Director Mrs. Jana Morris ’99 states that “the parents and students who view our Admissions Video ask if it’s made professionally, and they’re blown away when I tell them that it is created by students, led by Marcus.”

“[He] single-handedly represents everything our school stands for.”

Marcus is passionate about everything he does. He has learned that caring less about what people think is the key to accepting himself. He has found his place at CB through all of the positions he holds on campus. Inevitably, Marcus began to meet more people, and today, almost everyone knows him.

When the Talon described Marcus as “The Face of CB,” he was taken aback. He doubted this title, but then began to accept it.

“What did I do to deserve this title?” he questioned. “It’s strange to hear — I see so many other people doing things around CB that would qualify them [for this title] just as much, if not more, than myself.”

But with his rosy cheeks and big smile, he continued to respond graciously.

“If I am to have this title…I really hope that people try to do some of the things that I do, and realize that putting effort in what you do is important, but caring for other people is more important.”

As Marcus enjoys these last few months as a Falcon, he can’t help but look towards his future. He has planned to continue pursuing film production and has applied to a handful of schools including Chapman University, Loyola Marymount University, and the University of Southern California.

Throughout the past three and a half years as a Falcon, Marcus has gone above and beyond. He has been entrusted with multiple leadership roles and has surpassed all expectations.

“It’s been a ride,” Marcus quietly stated. “But it’s a ride that I’ve enjoyed…every minute of it.”

Reflecting on all of the lessons he’s learned in the past years, the most valuable, he says, is that “being you is the most important thing to do.”