Support Sac Artists Such a saying has become widely used around the beautiful city in which we live. The music scene in Sacramento, California has exploded over the past few years. Bands and soloists are often seen playing, not just at large venues such as The Golden 1 Center, but at smaller ones such as The […] 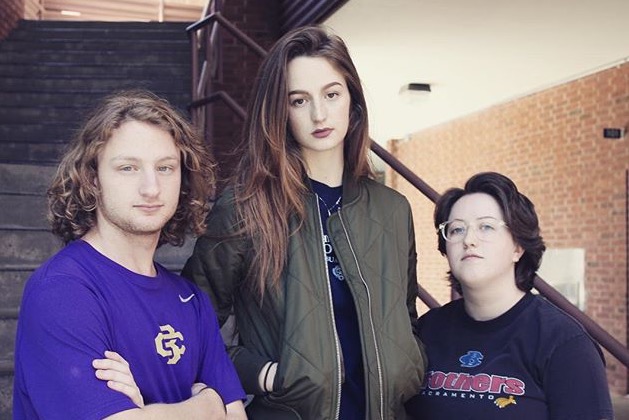 Such a saying has become widely used around the beautiful city in which we live. The music scene in Sacramento, California has exploded over the past few years. Bands and soloists are often seen playing, not just at large venues such as The Golden 1 Center, but at smaller ones such as The Naked Lounge and Shine Sacramento.

However, few know that many of these bands consist of hopeful teenage musicians trying to make their musical presence felt in the community. One such band is CB’s own Iscariot. The Talon sat down with its members to get the inside scoop on what has made them such a big hit.

This music project started when CB students Mary Claire Hancock (’17) and Grace Leu (’17) began to share songs that they had each written with one another.

“Mary had written her first song, ‘Out,’ and played it for me, and I immediately fell in love with it,” Grace commented. “She let me have the honor of learning how to play it, and once we played it [together] a couple of times, we just knew.”

While the two brought forth a lovely guitar and lead vocal combo, they knew that they needed something more to take their work to the next level. They found who they were looking for in their very own senior hallway.

“We had to have the best drummer in Sacramento,” Grace laughed.

Everything began to fall into place, and Iscariot was formed. 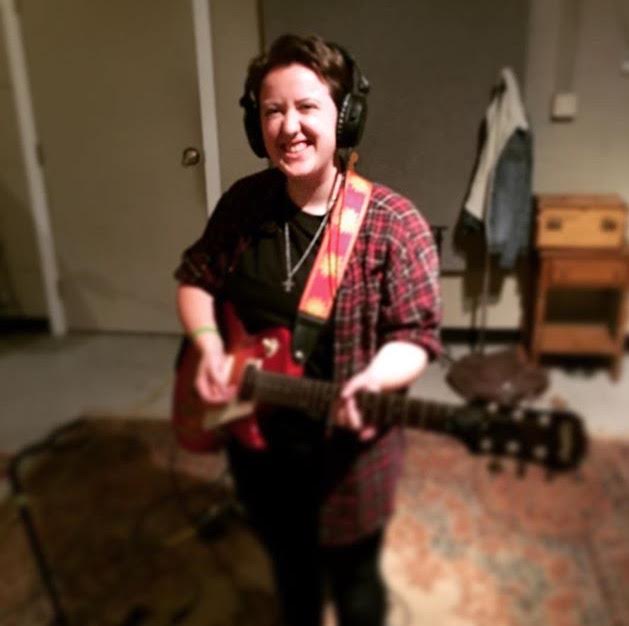 Grace is all smiles on the guitar.

“We all just kinda went to [Sean’s] garage and rambled for a good five hours and played new things I’d written,” Mary said. “It was serendipitous and amazing.”

“The songs that those two wrote were incredible,” Sean commented. “They were such an intimate expression of who they were.”

After playing together a couple of times, each member began to recognize and fall perfectly into a key role in the project.

“I sing lead vocals for the most part and write most of the music,” Mary states. “I sing mostly because I wrote the music and because I’m not nearly on the same skill level guitar-wise as Grace. I love getting to sing for my band.”

“I’d say I’d have more of a serving role,” Sean insisted. “I carefully observe how Mary and Grace orchestrate their parts and attempt to support the main theme of the song. At least, that’s my mantra going in.”

Once they had each gotten hold of the reins, they began to record their first EP, don’t tell. It became a smash hit instantly. Mary’s soulful voice wowed listeners, complemented exquisitely by Grace’s guitar and Sean’s drums. 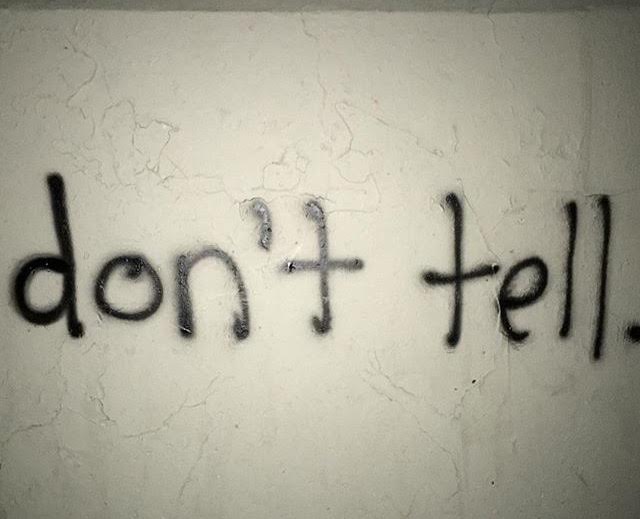 The cover of the band’s first EP: don’t tell.

“It’s hard to go into detail about each song because they’re really complex and each song is so different,” Mary stated. “For the most part, I’d say they’re pretty relatable to adolescents like us. We lament and whine about high school and our friends while simultaneously talking about our feelings.”

“Recording the EP, to me, was very serendipitous,” Sean recollected. “We had only been playing for about two, maybe three months and had some material that was already prepared to record. So we sought to find a studio that would be good quality but that wasn’t too expensive. Eventually, we went to a studio run by Eden Kolb’s uncle’s friend down by Broadway on a school night. It took about four or five hours to record it, overdubs and all, and Mary went back for a few more vocal sessions and post recording production.”

They each mentioned that some of their favorite songs to play include “Linoleum” and “Baby Teeth.”

However, before the band formed, each member had gone through their own unique musical journey.

“I’ve been studying music for about ten years now, but I’ve loved it since the beginning,” Sean mentioned. “I started out playing trumpet, fruitlessly, and eventually borrowed a snare drum from the brother of a friend of mine. In the summer of 2011, I started taking drum set lessons at Skip’s Music in Elk Grove and ‘the bug bit me,’ as my dad likes to say. I practiced and begged my parents to buy me any kind of drum set, and I did extensive research on what I wanted, too. For my 13th birthday, my parents bought me a black, five-piece Mapex Voyager series drum set, the same one I use today.”

“I’ve been singing since I can remember, writing music since freshman year, and playing guitar since I was 12,” Grace states. “Six years is a long time to be playing guitar, but I still have a lot to learn. The band has helped me grow exponentially as a guitarist and a songwriter.”

“I’ve always loved music, but I didn’t get into it until last year,” Mary recounted. “I think it took seeing friends my age perform and getting some encouraging words from my musically talented cousin. I was afraid to get into music out of fear I’d be bad at it, but then I realized it was such an integral part of me that I couldn’t hide anymore. Now I don’t care if I’m not the best performer/writer/singer, I just care about being authentic.”

But when it comes down to the band, all three agreed that one of the best parts is spending time with each other. When asked about one another, the responses were nothing but positive.

“My favorite thing about Sean is that he can just do his own thing on the drums and Mary and I don’t have to worry about him at all,” Grace stated. “We call him Sean ‘The Talent’ Baker. He just knows exactly what to do for every song and it’s perfect.”

“My favorite thing about Mary,” continues Grace, “is that her talent is never ending. She continues to surprise and impress me with every chord progression and song lyric she writes. And her voice! So beautiful and perfect for the band. She blows me away! Together, I love that we understand each other so well and we’re all so passionate about music. We just get each other. There’s no place I’d rather be than with my band.”

The group has gone on to perform at places such as CB’s Open Mic, Shine Sacramento, and The Boardwalk in Orangevale. With several gigs under their belt, many other CB students have had the opportunity to watch the talented group play. 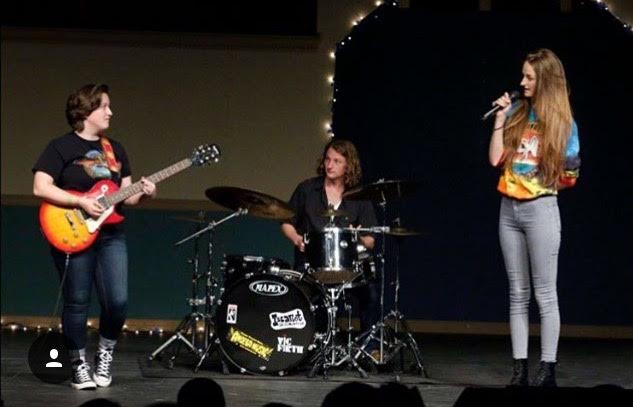 Iscariot performing at the CB Open Mic back in October.

“Mary Claire’s voice is so soulful, and the songs are playful yet they resonate with some of the darker sides of growing up as a teenager,” commented Joseph Nazareno (’17). 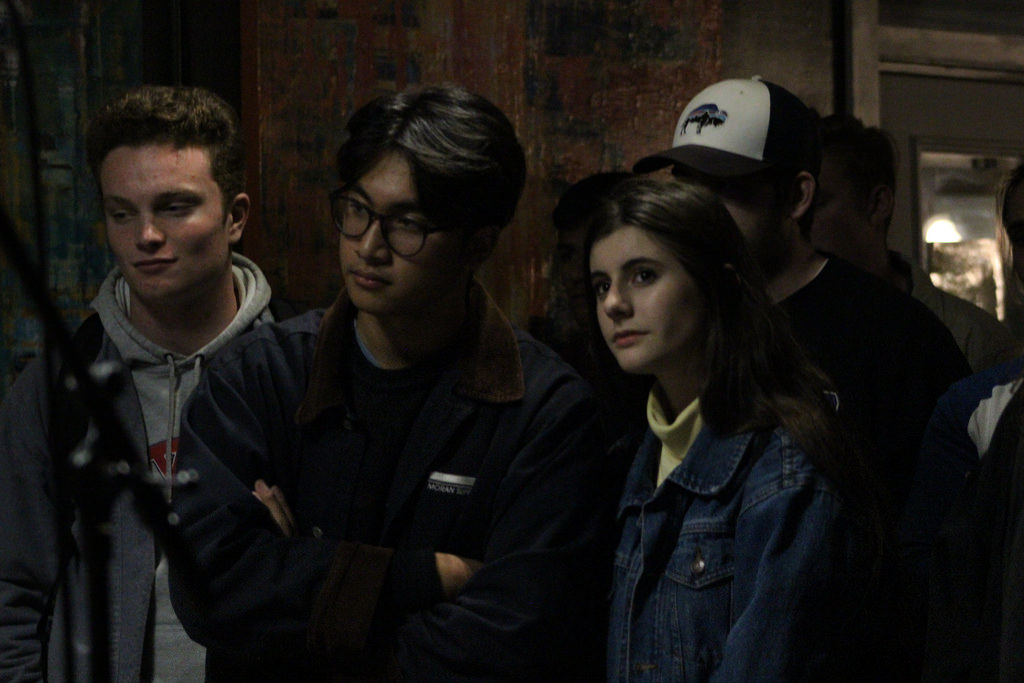 “I truly believe they could make it big in the music industry,” said Alex Tagudin (’17). “With only four live performances and one EP released, they’re already making an impressive impact on the Sacramento music scene.”

“I think that if they wanted to continue the band into college, they could go far in their career,” commented Eden Kolb (’17).

As for the future? The fate of this band is unknown. Yet what is known is that these three may be some of the most musically talented individuals to ever walk the Christian Brothers campus. So if Iscariot is ever playing near you — whether that’s tomorrow in Sac or five to ten years from now on the world stage — make sure to go and check them out because there is no doubt that Mary’s soulful voice, Grace’s rocking guitar, and Sean’s rhythmic drums with change your life.