Pocket protectors. Computer science. John Wooden. These are all things that evoke the name of the man, the myth, THE Mr. Scott Coyner. Some know him as the wise AP Stats teacher, others as the veracious LAX coach. But who really is the man behind the glasses? “I used to be super introverted,” stated the […] 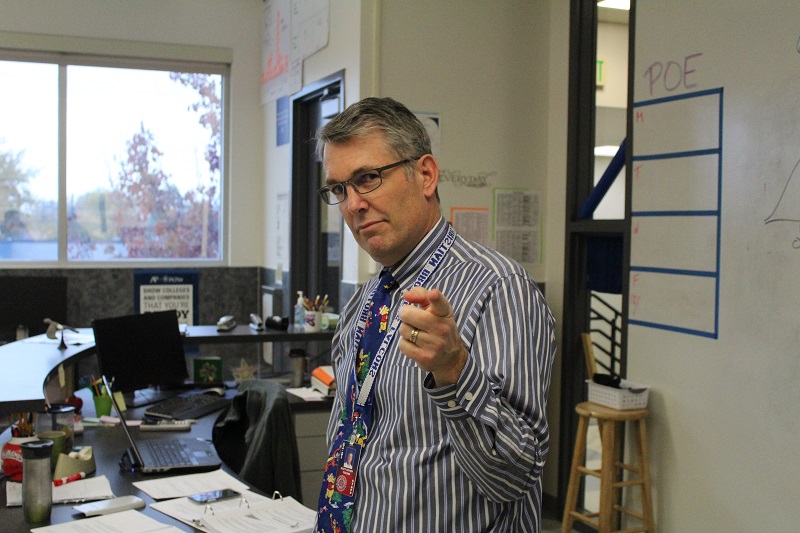 These are all things that evoke the name of the man, the myth, THE Mr. Scott Coyner. Some know him as the wise AP Stats teacher, others as the veracious LAX coach. But who really is the man behind the glasses?

“I used to be super introverted,” stated the math and science teacher. “Still am. I like quiet space.”

Indeed Mr. Coyner does come off as the quiet and shy type, but his timid personality has been no match for his insatiable craving for trying new things.

“My parents raised us to like experiences,” he stated. “So I was encouraged to try different things.”

And try he did. Mr. Coyner ran track and wrestled in high school and he was also an Eagle Scout. He was very busy throughout his high school years, but his really interesting hobbies came in his college years.

“I picked up rock climbing in college,” he stated. “A group of guys in the dorm were into it so I did it, and I also got into cross country skiing.”

Who would have thunk that CB’s very own computer science teaching, knit tie wearing, Mr. Coyner would have had so many interesting hobbies?

Mr. Coyner grew up in a family that has a deep military history, and he knew that he wanted to go into the military right after college, so he did ROTC and went into the Air Force as an officer. While there, he came to recognize an interesting talent that he never realized he had.

“From the time I was very young I was shooting and fishing with my dad.” Mr. Coyner stated. “I shot my first buck when I was five years old! I didn’t even know that I had any particular skill because I was always just comparing myself to my dad and brother. I was always just as good as them so I didn’t know that I could shoot any better than anyone else.”

Mr. Coyner came to find out that he could outshoot others not only in the Air Force, but in all five services of the military.

“When I got in the Air Force I went to qualify for pistol and got a really high score and I entered a local competition and I won, so the Air Force Rifle Team called me and asked me to audition,” he stated. “I went to a series of competitions in California and made the team so they sent me my sniper rifle, which was an M14, and 10,000 rounds of ammo.”

Mr. Coyner received so much ammunition because, unlike the rifle teams of the other services, the Air Force rifle team was a little more “rag tag”. Each member practiced on their own and the team only met up a couple times before competition.

“We were just a bunch of guys who went hunting and fishing” he exclaimed. “The Air Force really isn’t a sniper outfit so our shooting teams to compete against the other services were less intense. We just had a good time!”

And with these good times came some great results, especially for Mr. Coyner.

Along with Mr. Coyner’s shooting skills, another thing you might not know about him is that he is a lover of rock and roll. In fact, he plays the electric guitar.

“My dad is a classical pianist and he wanted to pass that along so we had the compulsory piano lessons when I was young, which I really hated,” he stated. “But it planted a seed.”

The musical seed that Mr. Coyner’s father had planted long ago would be cultivated into a passion for playing the axe by who else than someone in Mr. C’s college dorm.

“When I was in college, the guys in the dorms played electric guitar and I wished I could to that so I started taking guitar lessons,” he stated. “I played at my church and for my kids and then ever since my kids have grown and left the house I picked up the electric.”

Now, I know you’re wondering where to buy tickets to see Mr. Coyner at his next gig, but sadly his days in a band are but a fantasy.

“I haven’t been in a rock band,” he stated. “If I had a bucket list that would be on it, but I want to play lead guitar in a band even if it was just a bunch of old guys rocking out.”

The Talon had to ask if he might just do us all a favor and check this one off his bucket list sooner than later, but Mr. Coyner feels he needs to work on his skills a bit more before he can properly blow our minds.

“I love long solos,” he stated. “And I want to be able to think the solo and just have it come out of my hands before I join anything.”

Fair enough. We’ll just have to wait for his debut album to drop. But in the meantime, Mr. Coyner will be in room 610 reading Wooden, finding probabilities, and helping to shape the minds of the next generation. Because out of all hobbies and skills that Mr. Coyner has, his best seems to be connecting with the students of CBHS and sharing with them his infinite knowledge and wisdom, and we couldn’t be any more thankful.