You are here: Home \ Community \ Featured Posts \ They Came, They Saw, They Served: Venaver LA
Community
0

They Came, They Saw, They Served: Venaver LA

Last month, the City of Angels beckoned some of Christian Brothers own angels to experience real life poverty. During the week of October 16 to the 22, 10 juniors and two teachers, Ms. Amy Neff and Ms. Cheryl Flaherty, journeyed to Los Angeles for a service immersion trip — Venaver. The term, Venaver, means […] 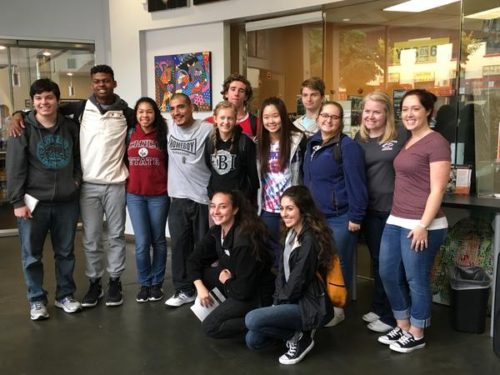 Last month, the City of Angels beckoned some of Christian Brothers own angels to experience real life poverty. During the week of October 16 to the 22, 10 juniors and two teachers, Ms. Amy Neff and Ms. Cheryl Flaherty, journeyed to Los Angeles for a service immersion trip — Venaver. The term, Venaver, means “come to see”, as it calls volunteers to come and see what can be done to serve the community.

The CB students walked through Boyle Heights and down Skid Row, both decrepit areas of LA that were once run by gang control. Now the neighborhoods are home to thousands of people who live near the poverty line. The average household income for Boyle Heights is just under $30,000, which is $6,000 greater than national federal poverty line. To help lessen burdens caused by gang tribulations and fiscal problems, programs like Homeboy Industries and Mission School are available to help the residents.

“We stayed in East Los Angeles,” Ms. Flaherty said. “The history is similar to Oak Park in that gangs pretty much ran the area in the ’90s.”

Homeboy Industries is a rehabilitation facility that provides hope, training, and support to formerly gang-involved and previously incarcerated men and women allowing them to redirect their lives and become cohesive members of society.

“The man who was our liaison, Father Greg Boyle, the priest for the school and CEO of Homeboy Industries, wanted to do something about the gang problem,” Ms. Flaherty said. “That’s where Homeboy came from.”

Ms. Flaherty added that the students also served food at Skid Row and worked on an urban farm.

“We did work with the Catholic school that is attached to Homeboy and in that church at the school, homeless people from the community live there from 90 days to even a year,” she said. “The students served meals, so the group served lunch one day on Skid Row. We also worked at an urban garden in the community.”

Camilla Patterson (’18) had few prior impressions of Boyle Heights leading into the immersion trip, so she had her own blank canvas to paint. Upon reflection of her trip, she noted how important it was not to judge based on appearances.

“The trip taught us not to judge a book by its cover,” she said. “People don’t choose to live that lifestyle because there are a lot more reasons for being homeless than just being lazy.”

The junior also mentioned how she has started to see what she learned personified in Sacramento.

“When I was driving through Oak Park the other day to get to school, I saw an old man laying down.. and seeing him, I would normally be sympathetic for him, but this time, I realized, I saw that he was wearing okay clothes and shoes. So I didn’t just think of it as a man laying there. You think about how he got there, why he’s there, his story.” 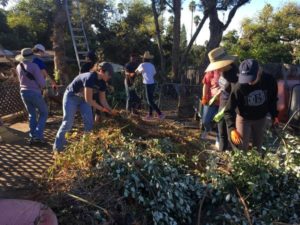 Camilla working on some yard work.

Jessie Yearwood (’18) reiterated similar remarks and added that the bond created between the students on the trip was special.

“Our group, we are super different people…but it all worked out because we were experiencing something new together,” she described.

Ms. Flaherty’s observations liken to those of Jessie’s, as she noticed that the students’ close relationships alleviated the emotional shock of seeing the homeless community while also producing an interest in service.

“The shock also forces lot of the kids realize to realize how important it is to serve others and give back to the community,” the history teacher said. “This is a unique opportunity to learn though hands on experiences, so students are taking more out of it than they would from learning through presentations and lectures.”

The raw energy that flowed from the people living on the streets to the philanthropic students allowed for them to conceive the experience without the media putting a filter on it.

The trip is the first of three Venaver service immersions planned for this school year. The next will be to Yakima, Washington in March to focus upon environmental justice and the third will be to Memphis, Tennessee, where the emphasis will be directed towards civil rights. The theme for the all of the Venaver trips is social justice, as they focus on the Lasallian core principle of concern for the poor and social justice.

Christian service director and Venaver coordinator Ms. Jennifer Lystrup described the mission of the immersion to encourage students to think “about being disenfranchised and living on the edges of poverty and of society”.

The hands on experience creates a foundation for students to believe in the good of the volunteering that they do. Jessie said that her experience gave her a purpose for volunteering.

“I have done service my whole life, but I have never thought about the meaning. So now I feel like there’s meaning behind volunteering and I’m doing service for a good cause.” said Jessica.

Ms. Lystrup added to that, saying “the trip is also a chance for students to see redemption. They hear stories from Father Boyle who rode his bike through the streets of Boyle Heights to stop the shooting.”
Ms. Flaherty best summarized the trip when she said that “these students come from comfortable situations here at home, so to watch them take in the impoverished communities was powerful because you’re able to see and meet with people who have turned their lives around.”
Tagged: camilla patterson, jessica yearwood, Ms. Flaherty, Ms. Lystrup, Ms. Neff, service, Venaver
Share: