The Search For Scully

Some might know him as the teacher who is always frantically on the move pushing a cart full of equipment up and down the science halls because of his lack of personal classroom space. However, there are lots that students and faculty would never know, including the number of planes he has been on or the fact that […] 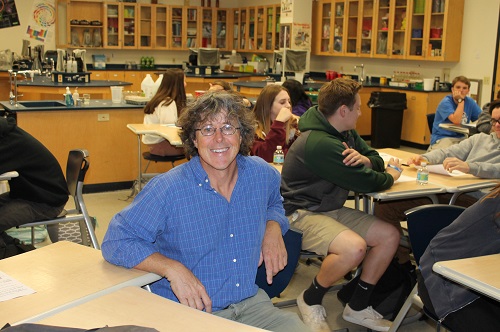 Some might know him as the teacher who is always frantically on the move pushing a cart full of equipment up and down the science halls because of his lack of personal classroom space. However, there are lots that students and faculty would never know, including the number of planes he has been on or the fact that the cover of the biotechnology books contain pictures of his old students and classroom.

It all started in New York, and luckily has come to Sacramento. Over the course of 48 years, Mr. Kevin Scully has lived in over twenty different cities, taught in eleven different countries, and studied more subjects than someone can count. From being born in Manhattan to raising a five person family in Davis, California, Mr. Scully has seen and done it all.

Straight out of Columbia University at age twenty-four, Mr. Scully was sent to Venezuela for a job opportunity which lasted two years. He participated in adventure travel, taught different programs in boarding schools, and worked on projects to help benefit the community.

After those years, he returned home to New York and continued to live out his passion for science. He attended graduate school in Albany and then fled the country once again. This time he went to India and was a program monitor.

He was always somewhere other than home, but while flying between India, Thailand, Vietnam, Iraq, Venezuela, Guatemala, Costa Rica, Belize, Nepal and Ecuador, a monumental event occurred while working in Switzerland.

“I met my wife on a mountain top in Switzerland,” Mr. Scully said with a smile. “Pretty cool, huh?”

After realizing she was the one, the couple moved back to New York where his family was.

“We went from living on a mountain top in Switzerland to living on the corner of Second Street in Manhattan,” he said rolling his eyes at the thought of living in an overcrowded neighborhood.

The two adapted back to their normal lifestyle, but his wife knew something was missing — her parents.

The two searched for new places to settle down closer to her parents in California. They looked around in Boulder, Portland, and Berkeley, and once they found their ideal spot, the two packed up and did something very familiar and easy for the two — they packed up their stuff, jumped on a plane, and flew across the country.

“We found a great set up in Berkeley. It fit the budget, was close enough to her parents in Southern California, and wasn’t too long of a commute for my wife to reach her post doc at Stanford,” Mr. Scully stated.

As the years passed and they both received their advanced degrees, another move was anticipated.

Mrs. Scully was now a psychologist with a private practice facility in Fairfield. Mr. Scully was working at a school in Fairfield teaching biology and biotechnology, and although his commute was nothing, his wife’s began to get a little too much.

Once again, the two decided to search for a new neighborhood. This time, they chose Davis to be their next stopping point.

For the past seven years the Scullys have resided in Davis, where the three children attend school. Mrs. Scully has her own private practice facility; Mr. Scully on the other hand, still has a commute.

“I was completely happy with my job and the commute to Fairfield didn’t bother me, but as soon as Mrs. Brousseau told me that a job opportunity had come up at Christian Brothers I felt some sort of urge to apply for it,” Mr. Scully said shrugging his shoulders.

The new job came out of nowhere, and within a week of applying for the job, he had already accepted it and was informing his colleagues that he would be teaching at Christian Brothers High School the next upcoming school year.

As a student of Mr. Scully’s, I would have to agree with his feelings of enjoying his new Christian Brothers family. I enjoy taking his biotechnology class and learning about all of the different outrageous activities he has gotten to accomplish in his life so far. I only wish I can be as adventurous in my life as he has been in his.

Although Mr. Scully might just seem like a rolling (cart) catastrophe, his life and class is packed with extraordinary detail and experience. Next time you see him, think about what he has accomplished, and what he still has yet to accomplish.

Where will Scully end up next? The world will never know, but hopefully he never leaves the Falcon family.