It’s no secret that Christian Brothers Fall sports teams have enjoyed plenty of success this year. Four section banners now call the Ron Limeberger Gymnasium home, and another one could very soon join them on the gym wall. With all the victories and triumphs men’s water polo, men’s cross country, women’s golf, women’s volleyball, and […] 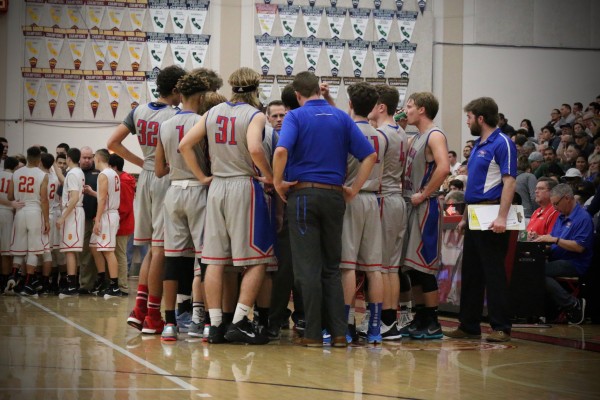 It’s no secret that Christian Brothers Fall sports teams have enjoyed plenty of success this year. Four section banners now call the Ron Limeberger Gymnasium home, and another one could very soon join them on the gym wall.

With all the victories and triumphs men’s water polo, men’s cross country, women’s golf, women’s volleyball, and football have piled up, it leaves CB’s winter sports with big shoes to fill. However, men’s basketball is certainly a team willing to and eager to rise to the challenge.

Fresh off opening the season with an impressive 70-59 victory over defending D-II NorCal champions Berkeley High, men’s basketball is pumped and ready for the season to takeoff.

Last Saturday’s matchup between the Falcons and the Yellowjackets took place at the prestigious NorCal Tip Off Classic in the Bay Area. The six game showcase featured some of Northern California’s most storied and successful basketball programs.

CB edged out the Jackets in a tightly contested first period of play 19-17. The Falcons defense locked down Berkeley in the second quarter holding them to just seven points. CB had solved the Jacket’s full court press and built a 32-24 lead going into the half.

The beginning of the third quarter was not as kind to the Falcons. CB came out slow and Berkeley pounced, as the Falcon’s eight point lead disappeared as the Bay Area team took over. However, the Boys in Blue showed great resilience to fight back and reclaim their advantage on the game. Big time shots from JC Tyler (‘18) and Andre Albason (‘18), helped the Falcons close the third quarter of play with a 53-41 lead.

The horn sound at the end of the fourth quarter at Newark Memorial, and Christian Brothers men’s hoops completed their perfect start to the season with a 70-59 win. Junior Elias King (‘18) led the way with 18 points for the Falcons, and Albason nearly grabbed a triple double, finishing with 16 points, 8 assists, and 8 rebounds.

Albason’s efforts saw him awarded player of the game, and like the rest of his teammates, Andre cannot wait for the rest of the season.

“[I’m] really excited the basketball season is finally here,” says the three year starter. “The team and I have worked really hard during the offseason, and we are looking forward to making a lot of noise this year.”

The boys started their season out just how they had hoped and expected to, and they’re excited to get the ball rolling and mirror other CB sports recent successes.

Junior guard Will Warner (‘18) spoke to what the Falcons hope to accomplish this year saying, “[our goal is] a deep playoff run, make NorCals, and definitely win league”.

Like Will, Andre reiterated the team’s desire have a deep playoff run and win league, and added that the team wants to beat Jesuit, and hopes to “put CB on the map”.

The Falcons like their chances of a league title, but know they face stiff competition from last year’s winners Vista del Lago. Playoffs certainly won’t be easy either, and to reach the team’s goals, Warner knows what has to be done.

“Just play unselfish basketball. We have a lot of talent on our squad and everybody’s gotta sacrifice a little for the better of the team,” Will said. “As Coach [Tony Champion] used to say, ‘Compete to win every possession’”.

The Falcons didn’t have to wait long to get back into action. The squad continued their hot start on Monday versus Oak Ridge Monday, securing a 70-54 victory in this season’s Foundation Game. The Falcons home opener is on Tuesday night at 7 o’clock against the Del Oro Eagles. So come out and support the Boys in Blue as they look to stay undefeated.