This new school year has brought a lot of changes to our CB community (a new principal, new teachers, etc.) and our student body has taken them all on fairly graciously. But there seems to be one change to our way of life that has been causing a stir amongst students — the new seating […] 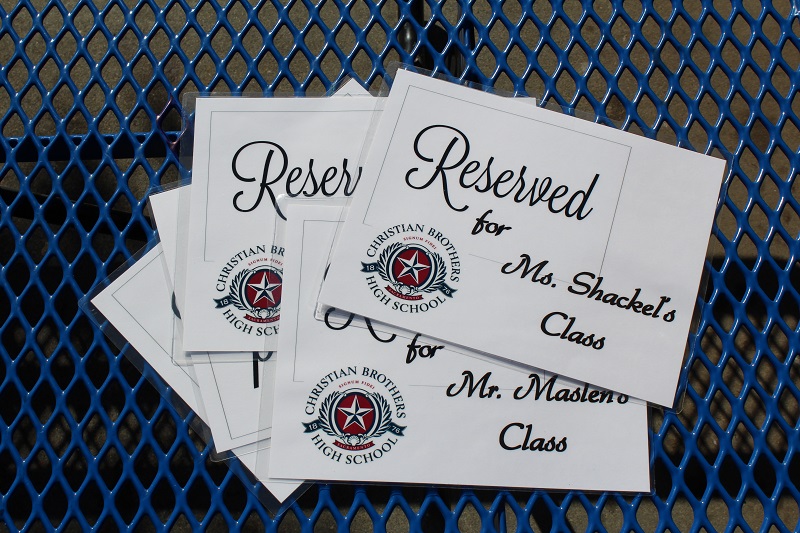 This new school year has brought a lot of changes to our CB community (a new principal, new teachers, etc.) and our student body has taken them all on fairly graciously. But there seems to be one change to our way of life that has been causing a stir amongst students — the new seating arrangement at liturgies and assemblies.

“I think that it’s unfair after we’ve been looking forward to the seating arrangement for four years,” claims upset senior Alex Cerezo (’17). “And I feel like the old one worked just fine.”

The seating arrangement that Alex is referencing consisted of seniors and juniors sitting in the chairs on the gym floor, while sophomores and frosh were put in the bleachers, leaving them with aching backs. But, that’s just how it is…or, was.

The two long, grueling years of sitting on the bleachers with no back support, sometimes having to resort to leaning back on the knees of a classmate for a minor relief, were a rite of passage. So you can only imagine the rage felt by many seniors and juniors when the Social Justice Week assembly consisted of freshmen sitting in the very front row with chairs and seniors sitting in the bleachers.

The Talon had to seek an explanation to this madness, so we spoke with one of our deans of students, Mrs. Cecilia Powers, to help us understand the reasoning for the new arrangement.

“The idea for a new seating arrangement at liturgies came from Mr. O’Connor and Mrs. Yearwood and I think many adults on campus who have been concerned with students’ participation and appropriate behavior during liturgies,” stated Mrs. Powers.

She went on to explain exactly why having students sit with people from their classes and with teachers they actually have helps solve behavioral problems.

“Teachers often shared their concerns with me, as the dean, because I have been one of the people who has told teachers where they have to sit,” she stated. “Teachers would have said to us that they find it very difficult to manage students that they don’t teach in class because if they don’t know their names it’s harder to address them. So with that in mind, and with Mr. O’Connor’s experience at his previous school, we thought we would give it a try to have students sit with their classes and their teachers at liturgies.”

Though as hard as seniors try to understand, most still think the old arrangement is better. Take senior Mindy Roces ’17 for example.

Another issue that both students and teachers are concerned with is time. It truly felt like the new arrangement took much longer than the old one, but to be fair, anything new is going to take longer than something that has been done like clockwork for years.

“I think it’s more efficient to just have the classes go as a whole,” states Alex. “It’s pointless to go by individual classes, it takes too long.”

But does it really? Mrs. Powers quickly debunked this statement.

“It took only a few minutes longer to get in the room,” refuted the dean. “It typically would take us about ten minutes to get everyone settled; it’s now taking maybe 12-15 minutes, but hopefully with more practice it will move a little quicker. If teachers check their charts and know where they’re going and let their classes know, theoretically we should get people in there a little more quickly.”

And really, the proof is in the pudding with this arrangement. The hard cold truth is that it actually works!

“I think it’s worth it because the behavior and participation in this past liturgy was really noticeably better, and I saw students singing and didn’t see them chit chatting or braiding each other’s hair,” stated Mrs. Powers. “I think a few more minutes of time to get us seated is well worth it having better behavior and participation in our liturgies.”

Mrs. Powers is definitely right when she states that the last liturgy was noticeably better. It seemed that students were having more fun, engaged, and giving out the Eucharist also seemed much faster than usual. And really, all of the kinks of this new arrangement are already being dealt with. Senior and junior classes have been moved back to the chairs on the floor, where they belong, and little by little, our community has been getting more accustomed to the new system.

It seems that CB students and staff have proved yet again that they can adapt to whatever is thrown at them. Though we may have lost a seating arrangement that was near and dear to our hearts, we have gained one that is really just as good.