You are here: Home \ Falcon Sports \ Featured Posts \ Get Ahead With Sports Med
Falcon Sports
0

Get Ahead With Sports Med

The fearless Sports Medicine team is there at every football game rain or shine and just about every other sports game with fanny packs, water bottles and a helping hand. But what drives them to do what they do? The Talon decided to ask some of these tireless, smiling members to further understand the […] 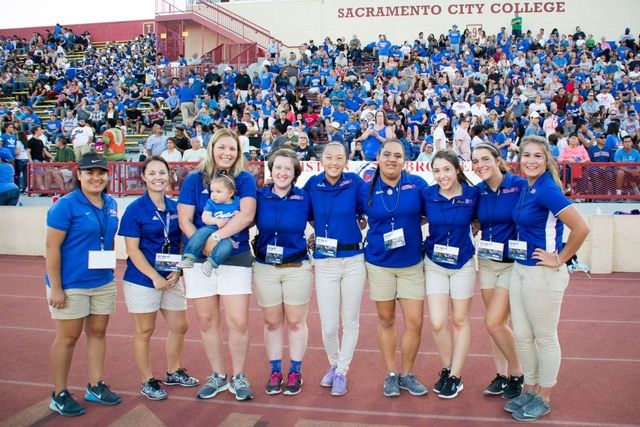 The fearless Sports Medicine team is there at every football game rain or shine and just about every other sports game with fanny packs, water bottles and a helping hand. But what drives them to do what they do? The Talon decided to ask some of these tireless, smiling members to further understand the true sacrifice behind this amazing program.

“My sister did Sports Medicine and she said that I would like it and she was right,” a smiling Grace Leu (’17) says about her reason for joining the team.

The Talon also talked with Josh Laora (’18) about his reasons for joining the program.

“I realized that my freshman year I wasn’t into many club or programs,” he says. “I needed to get more interested into some other things, so my friend, who is in the sports med program, gave me a chance to look inside and see how everything is, and I also have an interest in medicine.”

Josh is also the only guy on the team, so he chuckled as he explained the feeling of being in that position,

“I just came in and thought this might be kind of odd I’m like the only guy doing this. It’s a whole new thing. It’s honestly great really I’m in an environment that’s… it’s kind of something that you have to get used to at first. They really make me feel like I belong.”

Just like every sport, there is a lot of training that goes into preparing for a game.

“We learn how to treat certain injuries so if somebody has bad ankles we learn how to tape an ankle and then once we perfect it and get it signed off then we can perform it on athletes,” Grace tells the Talon. “But there is tons of other stuff that we do, just as simple as a wound to cover up a scrape.

There are hours of commitment required to perform all of the required duties of the sports medicine team.

“It’s definitely a commitment — it would be at the same times as an after school sport,” Grace says. “I actually consider it my sport that I do even though there is no physical activity at all. I consider it my thing that I do and you have to commit to going to the football games if you’re working during the fall season, and other than that, usually winter and spring are pretty relaxed and you can sign up for different games to play.

Grace explains how the team’s busiest season is also the most fun.

“Football is the busiest sport that we do. We are committed to all the sports, but fall is definitely a big one. It’s the most fun. It’s the one we are most involved in because we go to every game and we are there with the [water bottles] and we tape up all the athletes and stuff, but we do the same for basketball and volleyball. We still put out water for the volleyball players but we just aren’t present and we don’t travel with them but we do with the football players.”

Much of what the team does is behind the scenes rather than on the field,

“After school is where we do more work rather than games,” Josh says. “After school we are getting players ready for practices, wrapping ankles and taping and such. Anything to really to just prepare the athlete for whatever they needed get out there and play to their ability.”

The team also has a member from the past join them that has lost a lot of weight,

“We have a skeleton in there, her name is Betty, Betty Bones. But she is kind of falling apart, her jaw is gone. We still have her jaw but it’s disconnected so we have to tape it back on,” Grace shared. “It’s just really funny because every once in awhile she will just fall over like somebody will accidentally bump into her and she’ll just fall over and it doesn’t really help that she’s very brittle and fragile.”

Both of these CB students work hard along with the rest of the team to help our athletes on and off the field to make sure they perform their best.

“It’s really a program that’s for anyone that’s going to take the time and is dedicated to it,” Josh says. “You’ll really like it.”