We constantly hear in the media about the importance of the millennial vote. For that vast majority of CB students, this is more of a abstract concept. They still have a few more years to go until voting becomes a reality, and even if they are interested in politics, their voice isn’t heard. However, for a […] 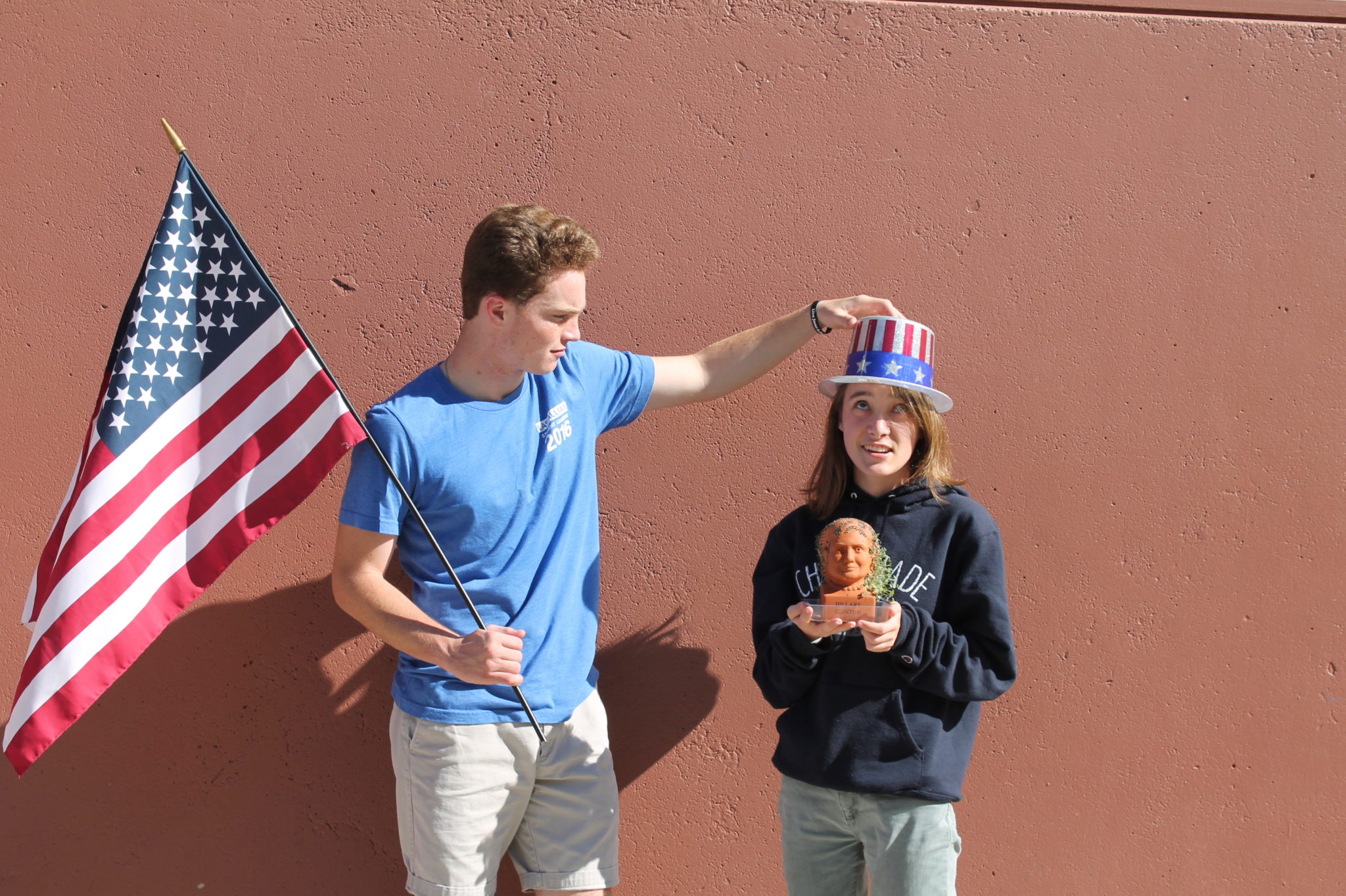 We constantly hear in the media about the importance of the millennial vote. For that vast majority of CB students, this is more of a abstract concept. They still have a few more years to go until voting becomes a reality, and even if they are interested in politics, their voice isn’t heard. However, for a few seniors, this election will be the first one in which they can vote.

Voting can be an exciting, coming of age rite, and it is the first time that the young generation can make his or her voice heard in the confusing world of politics, dominated by archaic politicians of an older generation.

This election is historic. Hillary Clinton is potentially the first female president, and represents the typical, scandal ridden politician that we are used to. Donald Trump is unconventional, with a strong voice catering to a demographic of conservatives who are not usually represented in the conservative media. Similarly, this is causing a divide in the Republican Party.

Gracie Leu (’17) talks about her experience with this election.

Like most young people, Gracie previously did not spend the time to look at the political media.

“I’m required to [read/watch  political media] for my civics class, so I’d say I’m definitely catching up in politics because of this civics class and before I wasn’t involved,” she added.

However, she found that the media has in fact changed her perception on the candidates.

“It also helps that I’m 18 now,” she says. “I kind of need to be more involved and like so that I’m aware and educated about what my country is going to be doing and who I should be voting for.”

The push, not only from her civics class, but of her civic responsibility has made her more involved in politics.

“Ive definitely gone from being fully left to being kind of like ‘oh well both candidates kind of aren’t great, but…’ And that’s just from reading  news articles and stuff because my family is pretty liberal.”

For the most part, her family has shaped her political opinion, but she found that as she reads more and learns about politics both from the media and in class she has formed her own opinion.

“My aunt had a long conversation with me about how Hillary is the most qualified candidate and I was like ‘yah! Go Hillary!’ like Hillary is the best blah blah blah and then I  read up on her and…she’s definitely got issues. She’s got some problems.”

The media has been a extremely influential component of this election, as it has become so personal to both of the candidates. Similarly, the millennial vote is going to be extremely important, as it always is.

As people tend to gravitate to people with similar values and ideals, friend groups can have similar political opinions.

Peer groups can be a great place to help form political options and cultivate a healthy discussion when those discussions are appropriate.  Young people have a lot of power and strong opinions, and those who can vote should spend the time discussing and researching so they can make an educated and meaningful vote.

Gracie concluded by stating that she will encourage her friends to vote.

“The ones that I know are going to be 18 I’ll definitely encourage to vote because I think voting is going to be very important this time around.”

Chase Davis (’17) is another CB student who is going to make his vote matter in this 2016 election.

He explains that his parents are “strong conservatives”. However, through his own research he has developed his own opinion and still leans right, mainly for “economic problems”.

Immigration is one of the issues that he has developed an opinion on, stating that “there needs to be more regulations”.

In addition to immigration, he touched on the topic of gun control expressing.

“Even for a conservative, I like gun control a lot,” he says.

The media has played a small part in how he has shaped his political opinion.

“In my house we watch a lot of Fox News, so that’s generally conservative, so that’s how it affects my vote”

Peer groups are also a huge component in what issues one pays attention to.

“A few of my friends are very conservative, but I go to Christian Brothers so I have a lot of really liberal friends too.”

However, his friends don’t talk about politics that much as most of them can’t vote yet.

“A lot of my friends can’t vote this election, but my birthday is on the Election Day so I lucked out.”

In addition, Chase has found that “it’s hard to be a conservative in California because it seems like I am by myself on a lot of issues and there I no one to back me up”.

Therefore, cultivating political conversation with peers is hard, as people are quick to judge and form opinions rather then taking an unbiased view at both sides of the discussion.

“My party’s candidate and I do express some of the same views with economics and immigration,” the senior says, before adding that he “cannot share these views at CB because even though I do not support Donald Trump, a lot of people at CB don’t like him”.

Mr. Michael Hood, a AP U.S. History and Civics teacher here at CB, explains his opinion of the millennial vote and his experience with young voters in his class room. 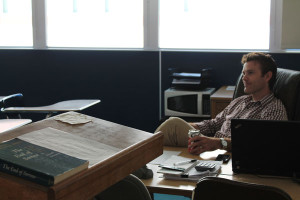 Mr. Hood has his civics class listen to weekly NPR podcasts, in addition to finding a article to write about. His class teaches the basics of the political system and students are required to give presentations both on political issues and on the supreme court cases. Those who take his class have no choice but to be informed, although to be informed is not as much of a travesty as most think it is, regardless of the amount of work.

“People your age should be asking things about college debt and healthcare and particularly environmental issues, in my opinion, because that’s going to be long term,” the civics teacher states. “I think it’s been really hard so far to get them to respond to things like that because this particular election is so personal.”

Mr. Hood Encourages his students to watch the debates and look for issues that pertain directly to us. However, despite his effort to get young people engaged in politics he states that “,any young people aren’t going to pay attention” to the election and to politics in general.

“People aren’t paying attention to this one and this one is a reality show so it’s entertaining,” he claims.

This election, as we all know by now, is historic. There has been nothing quite like it before.

“We have been bored with the last couple [of elections],” Mr. Hood hypothesized. “People feel like nothing is getting done. That’s the general feeling, like if we elect someone again, like Jeb Bush… it just feels like more of the same.”

The election has been entertaining and spiteful, with both Democrats and Republicans attacking the other with a voracity that we have not seen in American politics before.

“He is completely out of the norm, he is not party affiliated at all — he is a Republican, but he’s not,” Mr. Hood added. “I have never seen anybody like Trump before, I mean it’s kind of shocking”

“For example, the insinuation of putting Hilary in jail I have never heard that before that’s the first time I think in history, in our history, that that’s occurred.”

The civic instructor continued by alluding to past conservatives who have been bashed by the mainstream media.

“In the past we have had people who we all talk terribly about. [Richard] Nixon was a career politician who was careful about what he said to the public and legitimately had a generally good presidency despite the whole.. I don’t know… complete utter scandal [of] Watergate.”

Millennials are a demographic that Hillary in particular has been attempting to cater too, raising the question: why are young people so influential in the electoral process? Similarly, why are young votes so lacking? Young people tend to have strong opinions, and are for the most part unafraid to express them.

“I think you guys are under the erroneous perception that your vote doesn’t matter or what you do doesn’t matter and if you notice statistically as age groups get older we vote more and more,” Mr. Hood says. “I think as time goes on, you really realize that your vote matters and you start to recognize that what the government does, the policies they pass, does effect you.”

Mr. Hood believes that the youth have more of a impact then they think they do, and that as they get older, they start to recognize the importance of their voice.

“More so, I think maybe it’s just a maturity thing, that people your age are in a little bit of a bubble. That bubble starts to pop as you get older.”

Those who can vote should do their best to become informed on both the candidates, encourage friends and family to have political discussions, and become an active civil servant. It is a lot of work for students to take the time from their busy schedules. However, voting is meaningful and very influential to the world around you.

Your vote matters — will you use it?