One of CB’s little-known classes is Academic Decathlon, a pass/fail zero period class on Mondays, Wednesdays, and Fridays taught by Ms. Mary Bowers and Ms. Holly Keller. It is essentially a year-long preparation for an inter-district competition among Sacramento high schools on Saturday, February 4th. The students prepare a speech, write a timed essay, do […] 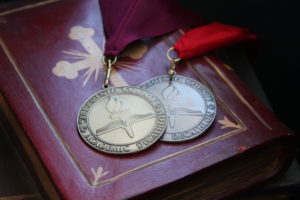 One of CB’s little-known classes is Academic Decathlon, a pass/fail zero period class on Mondays, Wednesdays, and Fridays taught by Ms. Mary Bowers and Ms. Holly Keller. It is essentially a year-long preparation for an inter-district competition among Sacramento high schools on Saturday, February 4th.

The students prepare a speech, write a timed essay, do an interview, and learn material in seven different subjects for multiple-choice tests. Every subject connects to a central topic which changes annually; this year’s theme is World War II.

This may sound like all work and no play, but the program has 20 students currently enrolled. Veteran Ben Slakey (’17) shared his take on last year.

“My experience last year was great,” he said. “At first I was worried about the early starting time, but it ended up being quite fun.”

First-year member Michael Angeles (’17) has a similar sentiment about this year. 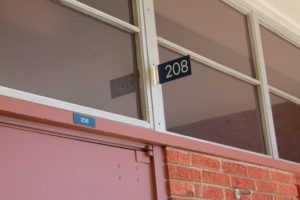 The Acadeca kids meet bright and early at 7 every morning in Ms. Bowers’ classroom.

The vast range of the subject matter ensures that there is something interesting for everyone. The seven categories are art, economics, music, literature, mathematics, science, and history. When asked about his favorite subject, Ben responded confidently.

“Definitely economics. I feel like I really understand the basics of it, and once you understand those, it is easy to get the rest of the content, and also fairly interesting,” the senior explained. “Plus it seems like a lot of other people struggle with it, so it doesn’t require as perfect of a score as some other categories to do well in.”

Although both students enjoy working with numbers, Michael also has a soft spot for the humanities.

“I like the history section a lot,” he states emphatically, “and I think that econ and math will be pretty fun too.”

It may seem like Acadeca is only for students with 4.8 GPAs, but Ms. Bowers debunks the scholars-only myth.

“If there are any students out there who think Academic Decathlon is not for them because they might have a 3.2 or a 3.0 or a 2.7, we need them,” the English teacher says passionately, slamming her palms against her desk. “[We] need students with GPAs under 3.0 in core classes over the past two years.” 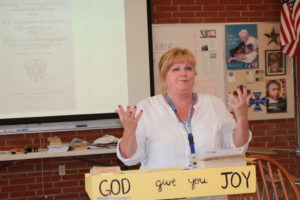 Ms. Bowers may pose an intimidating figure, but she’s actually one of the most welcoming team leaders around.

The starting team for Academic Decathlon, which consists of nine people, is divided into three levels: honors, scholastic, and varsity. The honors section is 3.79 and higher, scholastic is 3.0-3.78, and varsity is under 3.0, not counting elective classes.

“[We] need and want students who are interested in learning things and who are competitive. Those are the two qualities I seek. And that applies to anyone who has the time and the interest,” the English teacher says.

The team won the gold medal in interview and silver medal in speech last year, but they’re looking strongly toward the future. Ms. Bowers shares her game plan for improvements to this year’s strategy.

“I’d like us to do better,” she jokes with a loud chuckle before she gets serious. “More team building. That’s something we’re definitely working on. I hope to have team events that are not strictly related to the curriculum.”

Ms. Bowers has some promising new plans for this year, and Ben believes that if the team works hard and keeps its focus, great things will happen.

“I am most excited for the opportunity to do well in the competition. I think we have a great team, and I think that if everyone stays motivated, we can really finish well.”