The Talon strutted into Studio 608, expecting a warm welcome with Mr. Brendan Hogan’s ’95 contagious smile. We thought our many close friends in that class would greet us with open arms and open hearts. All we needed was a simple interview, an explanation on what goes on during C Set in the center of […] 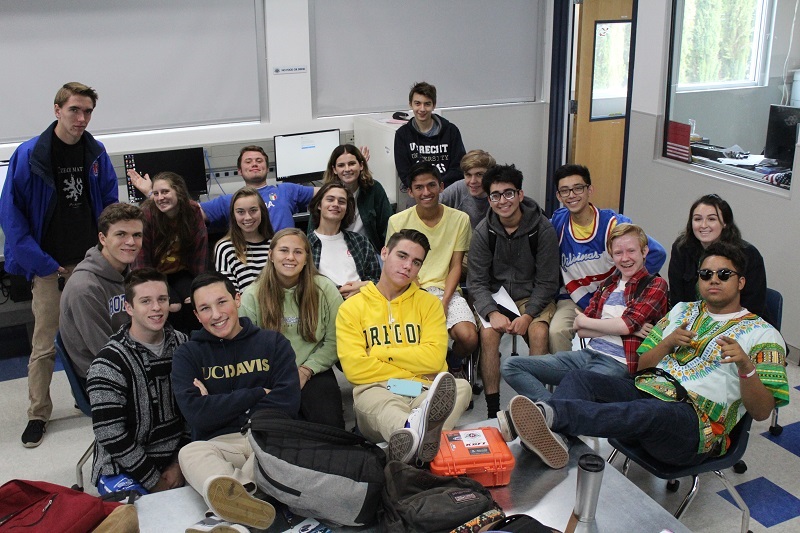 The Talon strutted into Studio 608, expecting a warm welcome with Mr. Brendan Hogan’s ’95 contagious smile. We thought our many close friends in that class would greet us with open arms and open hearts. All we needed was a simple interview, an explanation on what goes on during C Set in the center of the STEM wing. But instead . . .

“Barnes! What do you want?!”, Hogan screamed at the top of his lungs. I could have sworn I saw some expensive video equipment shake in peril.

“Hey, Mr. Hogan. I’m doing a Talon article on Video III. Who’s in it, what occurs. You know, the usual.”

“Not today! Get out we are watching a movie!”

So the Talon kept going back, asking over and over for just a little time to talk. They were so busy and always hard at work that we even considered writing about another class. But we kept chugging.

Maybe there’s a method to this madness.

Determined to learn more about this mysterious class, the Talon crew interviewed Devon Paulding (’17) and Justin Dacanay (’17) to find out what goes on in Studio 608 after junior year.

“Video III is centered around film-making type stuff,” Devon offers. “Right now we are just learning the basics. We are coming up with ideas, brainstorming, learning about script-writing, using Adobe Story, stuff like that. Also, coming up, we are watching a few classic movies, learning from them.”

This article is a learning experience for the Talon just as much as it is for our readers, and it’s absolutely imperative that kids at CB know there is a class offered that is centered around film-making. With notable Video III alumni loving their experiences working with Hogan, this class must be a hidden gem.

“We can watch all the movies we want, but a movie isn’t a movie without Hogan’s commentary.”

Clearly, a huge part of this film-making class is film-watching. Devon says they are constantly studying film — dialogue, unique shots, plot twists, etc.. So far, the Talon likes what it hears about this class. And watching films such as Good Will Hunting with Hogan’s insightful commentary? We could get used to that.

The Talon was impressed with the independence, creativity, workload – everything. Fascinated by what Devon and Justin had to offer, we asked them what their first short film ideas consist of.

“Right now I’m throwing around this idea about a dude who plays football,” Devon tells the Talon. “But gets involved with the wrong crowd and goes to jail for robbery, loses his scholarship, and has to learn from his mistakes.”

“Mine is a love story, at first,” Justin explains, “about a really awkward guy who comes home and yells at his mom. Then one day he meets a girl, they hit it off, and a couple days later they have a project. So go to his house, and the boy says ‘Oh hey, this is my mom.’ And the mom is just a broom and a couple pillows. And then, the next thing you know the girl is really freaked out. Then the guy kidnaps the girl to please the mom.”

Take Video III. The amount of artistic license granted to each and every student is obviously…mad.