In the middle of the George Cunningham ’40 Performing Arts Theater stage stood a small table and two chairs. CB Yearbooks from ’99, ’00, and ’01 laid on the wood. Surrounding the furniture stood amusement, happiness, and reflection. Across the table was a woman who has procured a passion of theater throughout her time at Christian […] 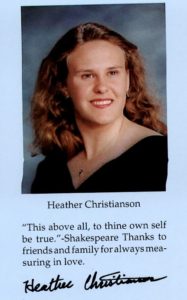 In the middle of the George Cunningham ’40 Performing Arts Theater stage stood a small table and two chairs. CB Yearbooks from ’99, ’00, and ’01 laid on the wood. Surrounding the furniture stood amusement, happiness, and reflection. Across the table was a woman who has procured a passion of theater throughout her time at Christian Brothers as a student — and teacher.

Ms. Heather Christianson ‘01 pondered upon the thought of luck and her present day position as Christian Brother’s Theater Manager.

“Things have worked out tremendously in my favor. I have been very lucky, starting as a student [at Christian Brothers],” she stated, joyfully.

As a freshman in 1998, Ms. Christianson transitioned from a rough middle school experience. As her freshman year came to a close, she latched on to hope, and found a place within Christian Brother’s community, specifically, in the theatre society.

As her mind echoed of memories, Ms. Christianson says that “I became a completely different person, even after my freshman year.”

She used her passion for Drama and Theater and applied herself during sophomore year. She got involved with the Drama Club, choir and even Christian Brother’s musical theater productions.

A favored memory came to mind from her early days at Christian Brothers.

Imagine walking into the theater room for auditions as a sophomore. You are nervous beyond belief, especially because you are one of the youngest people there. You are out of practice, and wondering if you will be “good enough”. Just when you walk in, James Snyder ’99, who later became a Broadway star, yells “STOP WHERE YOU ARE!” Then, he comes running out in Viking horns, exclaiming “You just walked through a wall!”

An epiphany was reached.

She decided to wear those exact horns in her senior year Drama Club picture to mark the memory that started her theater career at Christian Brothers. 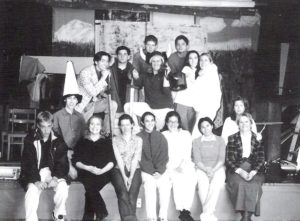 Ms. Christianson, wearing Viking horns, stands in the middle, with Ms. Loretta Kenney to the right.

“[Drama Club] was a group of kids that weren’t necessarily all the kids in the play.”

She attested that each of her friends in this club loved theater, drama, and all of them took joy in seeing each other preform.

Throughout the rest of her high school career, Ms. Christianson found a place in the theater society where she was valued, and prospered in the support of her fellow peers.

“When I came [to CB], I found a group of people that really cared,” she added, “people who realized that being competitive doesn’t mean having to tear other people down.” 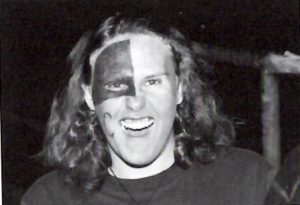 She took heart in this belief on the stage, and on the field.In the main hallway, there is a glass case of past memorabilia of Christian Brothers. In that case, there is a bell. A Bishop Armstrong Bell, to be exact. It used to be known as the “spirit bell.”

“I would paint my face, a lá Braveheart, and load that bell up into my mother’s station wagon.” Ms. Christianson laughs. “We went to every game.”.

The student spirit only bled into her future as a USC Trojan. She graduated from the University of Southern California as a BA student for Theater. 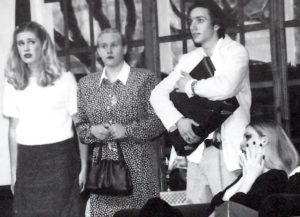 Ms. Christianson, after her epiphany was reached.

“[Returning to CB] was not in the plan. But it was the easiest decision I have ever made,” she confidently stated. “I overthink everything, so it was uncharacteristic for me.”

She pondered on the thought if she’s living her dream at the moment as CB’s Theater Manager. After a few moments, she insightfully stated that “getting this whole job, and winding up back here… I guess you can say that I am living the dream I never knew I had.”

Ms. Christianson is bold in her position, as she has no doubts that she is in the place where she is supposed to be.

She always tells her students on Vocational Fridays that “if someone asks you to come back to a place you really love, and help build a program that you care about tremendously, and here’s a 6.5 million dollar building to do it in…. say yes.”

Christian Brothers offers something more than academics, arts, and sports to the beloved Ms. Christianson. 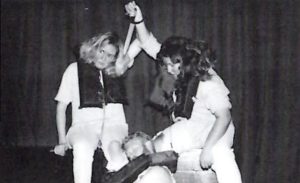 One-Act performance, with Ms. Christianson on the right.

“[CB] is a place where the idea that whatever your gift or talent is, it should be celebrated and it is valuable,” she told the Talon.

Today she believes that Christian Brothers has taught her to value others. She states that the motto, “Enter to learn, leave to serve,” has changed the pattern of her own life.

“I think I did not truly understand the value of the moral foundation that I had been given [at Christian Brothers] until I was older,” she expressed honestly. “Christian Brothers really shaped me to be more open with others.”

“Right now I am just really enjoying [life]. It’s an awful lot of fun,” she stated with a full heart.

Thank you, Ms. Christianson, for setting an example of what it’s like to live as a Christian Brothers student, alumna, and now, employee.