The Fire Of Fantasy Football

Christian Brothers High School has become recognized city-wide for it’s hard working, talented football program. Each year, the team dominates in the Capital Athletic League, performs exceptionally in playoffs, and sends students off to college with football scholarships. However, few are aware of the fact that football fandom extends beyond the gridiron. At CB, a […] 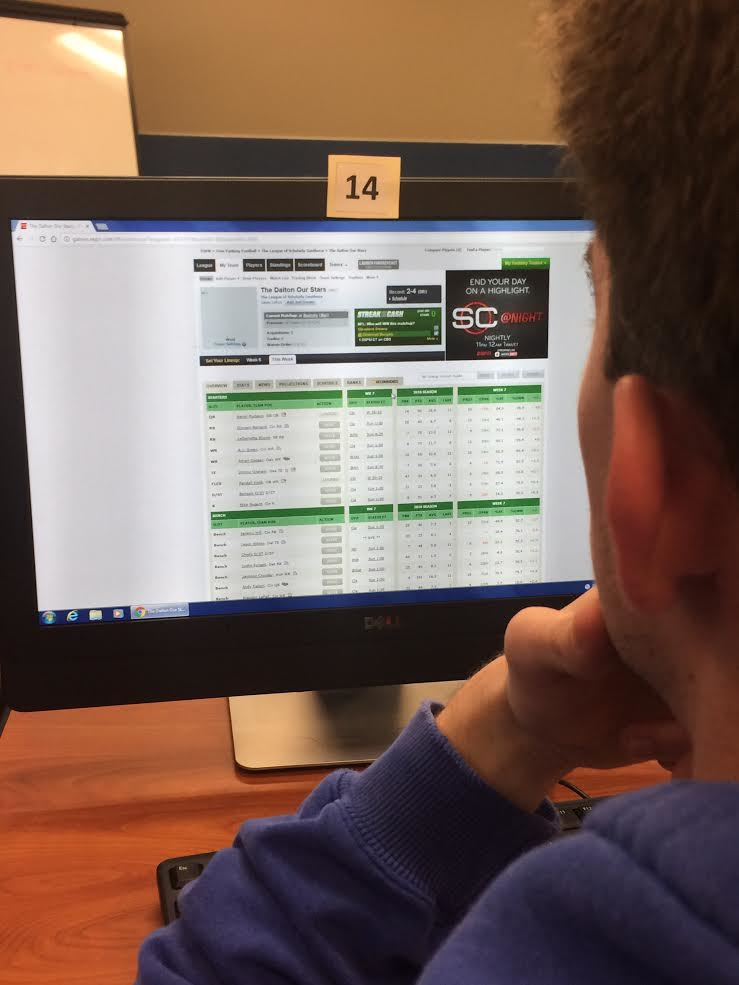 Christian Brothers High School has become recognized city-wide for it’s hard working, talented football program. Each year, the team dominates in the Capital Athletic League, performs exceptionally in playoffs, and sends students off to college with football scholarships. However, few are aware of the fact that football fandom extends beyond the gridiron.

At CB, a culture of fantasy football always blossoms in the fall and throughout the winter. The Talon set out to find what makes this pastime so popular.

For those who don’t know fantasy football is a competition in which people draft their own team of various players in the NFL and then play games against other teams. Points are scored based on how well the players people drafted play in real life.

At Christian Brothers, numerous students have invested hours upon hours in the fantasy lifestyle. It is common to hear lots of banter when walking through the hallways or insults about a certain person’s draft pick at lunch.

“It makes me more interested in how the players on my team do in real life,” stated two-year reigning champion Matt Marengo (’17). “I like competing against my friends and talking trash.”

“It just brings us all together in a fun competition,” Marcus Cepeda (’17) said.

Yet fantasy football isn’t quite as simple as it seems.

“There’s a lot of strategy involved,” discussed Sam Clark (’17). “You have to replace players who get injured and look at different matchups for different players every week, so you feel smart when your moves pay off.”

So who’s going to take the trophy this year? Everyone seemed pretty confident in their chances so far, but two-time reigning champ Matt felt as if his fantasy skills were unmatched by all who challenged him.

“I expect to win again, I mean, no one else stands a chance” he stated. “My best player is Antonio Brown and he is the best wide receiver in the league. I start him every week.”

“I just passed [Matt] in the standings last week,” Marcus said. “I’m confident I can take down the king. I have David Johnson playing RB and he’s super clutch.”

“[Matt] thinks he’s just so good when in reality, he’s just the fantasy commissioner who abuses his power to steal players off the waiver wire,” Sam commented. “Ezekiel Elliot is my best player, despite it only being his first year in the NFL. I drafted him 6th overall because he was so good at Ohio State and right now he’s the third best running back in all of fantasy football.”

Ms. Courtney Hendry and Mr. Casey Reeve ’04 both utilize the game in their Algebra II-B classes.

“The purpose of it is to provide real world examples of statistics, probability, and decision making skills,” Mr. Reeve explained. “There is a learning curve though for those who have never played and that is why they’re are put into teams in our classes to help those who are brand new to football.

When asked about his personal experience with the fantasy hobby, his responses were nothing but positive.

“I personally love fantasy football because of the interactions.  It is always fun to play against one of your friends, talk a little smack and then be able to talk about the games later,” he says. “It’s one of those things in life that is fun to do but you can’t take it too seriously because at the end of the day, you cannot control who scores 40 points and who gets a big goose egg.”

Ultimately, whether you play fantasy football or not, there is no doubt that it has become a big part of the CB social and classroom community. So when the beginning of the next football season rolls around, give fantasy a try because there is no doubt it will fulfill your desire for fiery competition in a friendly manner.