Parents. You can never actually really understand them until you become one. One minute they’re your best friend and the next you’re fighting over something stupid. You love them to death, but sometimes you just need a break — that’s where school comes into play. The nine hours spent apart from your parents helps to […] 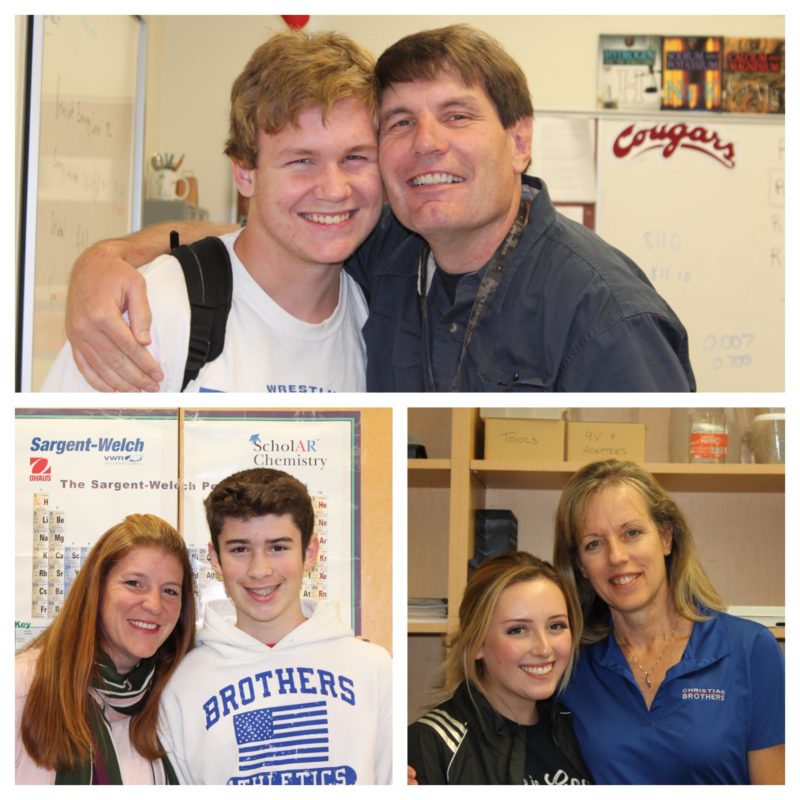 Parents. You can never actually really understand them until you become one. One minute they’re your best friend and the next you’re fighting over something stupid. You love them to death, but sometimes you just need a break — that’s where school comes into play.

The nine hours spent apart from your parents helps to better your relationship because you’re not constantly in each other’s faces. But what if you didn’t get that break? What if you saw your parents from the time you woke up to the time you went to bed? For some CB students, they don’t have to imagine it — it’s their reality. It’s time to learn about what it’s like to be the teacher’s child.

Many may think it’s a pain to have your parent work as a teacher at your school, but for Monica Thayer (’17) this is not the case. She loves having her mom, Ms. Chris Thayer, work at CB, and her mother’s position actually works to her advantage sometimes. She claims it is convenient for getting last minute papers signed or lunch money if she forgets to bring some. She might love having her mom teach at CB, but that still doesn’t stop her from being a teenage daughter.

“It’s my job as a teenager to drive my mother crazy wherever we are, so I work really really hard at that. But I still love her and she still loves me,” Monica lovingly declares. Her only complaint about having Mama Thayer work at CB is being dress coded.

Like Monica, Evan Brousseau (’19) also enjoys his mom, Ms. Nicole Brousseau, working at CB. Evan claims that his mom is constantly embarrassing him, but they’re still very close and see each other often around school.

When asked about how close she is with her son, Ms. Brousseau jokingly says, “He lived in my uterus for a little while so we’re pretty close. About nine months he lived in my uterus. I’d say you’re about as close as humanly possible.” A great example of her embarrassing behavior.

Despite her flaws, Evan still loves his mom dearly and plans on taking her Chemistry course in his future years at CB. “She’s a good teacher,” he says. Ms. Brousseau gets a big  thumbs up from Evan.

Speaking of Chemistry, we all know the legendary science teacher Mr. Bernie Eckel, but how many actually know his son, Brennan Eckel (’18)? Brennan, or more commonly known as Li’l Eckel or Eckel’s kid, loves having his dad at school, but these nicknames sometimes make it difficult to appreciate his father’s presence. Calling Brennan Lil’ Eckel or Eckel’s kid may seem fun and playful, but to him it’s the worst part about being Eckel’s son. Other than that, Mr. Eckel and Brennan’s relationship is solid.

“We just do little things together all the time,” Mr. Eckel says.

Brennan loves his dad and gets to see him every day for his AP Chemistry class, which he is doing very well in according to Mr. Eckel. Brennan says the best part about of having his dad at CB is that he is always there if he needs him.

Likewise, Mr. Eckel adores having Brennan at CB and in his class. Tearing up, he confirms his unconditional love for his son.

“Having your child at school with you is one of the greatest experiences of being a parent. You get to spend time with the child all day and you get to interact with the other kids who interact with them, and it just makes for a great setting. I feel extremely, extremely lucky to have the opportunity to have Brennan at school with me and in my class, and I’d like to thank CB for making that happen.”