It’s Not The Class, It’s The Past!

When you look at your teachers, it’s easy to see who they are now. They’re put together, professional. They are adults. They do taxes, have houses, and some even have their own sons or daughters. Now imagine them as teenagers: What did they like to do? Who did they hang out with? Were they ever as carefree and […] 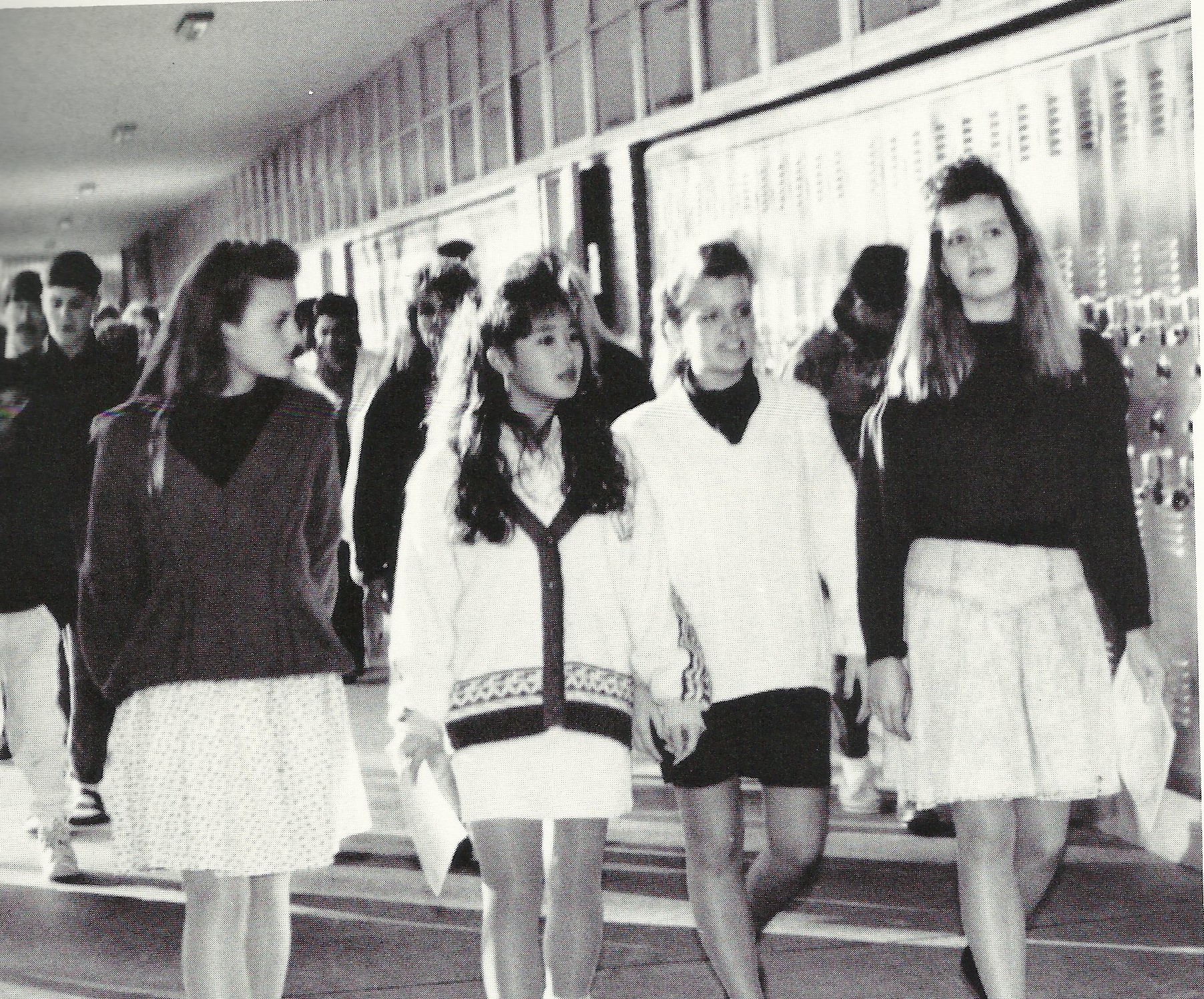 When you look at your teachers, it’s easy to see who they are now. They’re put together, professional. They are adults.

They do taxes, have houses, and some even have their own sons or daughters. Now imagine them as teenagers: What did they like to do? Who did they hang out with? Were they ever as carefree and reckless as you? Vocation Friday is only a glimpse at their adolescence, and students are often surprised to hear that teachers have been young too. 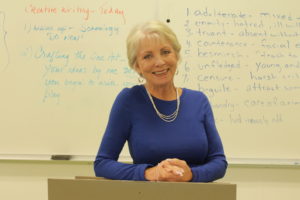 At first glance, Ms. Chrys Cassetta, looks like your typical English teacher. White hair and an friendly smile, she is known for her rigor and holds her students to high expectations. Students are always surprised when they see the rose tattooed on her ankle, and it raises the question: Was she always this calm and composed?

In high school, Ms. Cassetta was a shy, innocent teenage girl. She had a solid group of friends, who called themselves “The Magnificent 7.”

“[We] did everything together, went everywhere together, cried and laughed together,” the English instructor recalls. She attributes her happiness in high school to these wonderful friends.

“I remember our senior year in high school, our football team was undefeated, and our Friday nights were spent at football games,” she reminisced. “After the games, my friends and I would go to the Vineyard, our local pizza parlor, and eat pizza and flirt with the boys… after high school and into college, the Vietnam war began and that high school innocence was marred by the tragic loss of too many of the young men whom we’d so ardently flirted with during our frivolous high school years.”

She still talks to some of those high school friends today and remembers her high school years as an innocent, happy time.

At 17, Ms. Cassetta began making trips with a friend to join the civil rights marches in San Francisco, a hub of diversity and social movements.

“We were young (I was still just 17, though in my first year of college, and she was barely 18), naïve, and like many young people of that era, eager to make a difference in our world,” she recounted. “I would pick her up mid-morning, and we would head for SF.”

Ms. Cassetta was a teenager in a time similar to ours, where social activism and civil rights played a huge part in media and culture.

“All I can say is that it was electric; history was being made, and we were part of it all — committed, determined, passionate.” 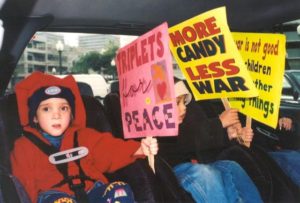 The Shelley triplets (’17) protest for peace, carrying on the tradition of civil disobedience set by Ms. Cassetta.

She recounts that during one of her more memorable journeys, “we lost track of the hour, and by the time we realized we’d better catch the trolley back to Fisherman’s wharf and head home, it was past midnight; the trolley had stopped running, as had the Metro. We had no money for a taxi, so we started the long walk back to the wharf.”

“Imagine yourself at 17 walking the hills of SF at 12:30 a.m.,” she laughs. “But we were high on life and didn’t consider the consequences — fortunately the fates were with us, and we made it back to my car and eventually home safely.”

Ms. Cassetta’s adventures did not stop as she got older. Her rose tattoo “is one of those ‘what I did for love’ kind of things,” and she got it upon the request of her granddaughter.

“For 3 days, I could not walk on my foot; it was a swollen, painful, bloody mess,” she recalls of her inking experience.

Ms. Cassetta and her granddaughter, Maddy, are inseparable, and so when Maddy wanted to become a tattoo artist, it was only natural that Ms. Cassetta was daring enough to support her dreams by getting a tattoo herself.

The tattoo began as a small daisy, and transformed into a rose.

“As I left the parlor that day, the tattoo artist told me that if the color fell out of the tattoo, to come back and he’d redo it. When we were out of his hearing, I said to Maddy, ‘If the color falls out of this tattoo, we are going to Target and buying some permanent markers, and you are going to color in the faded places ’cause I am never walking into a tattoo parlor again.’”

Fr. Francis Murin grew up in Czechoslovakia, and unlike today, there were no phones, computers, or real TV at that time.

“But we were busy,” the religion teacher recalled. “Our parents had to work, so we had a lot of chores in the fields — growing food, tending to animals — that kept us busy.”

In their free time, and after they had responsibly finished all of their homework, Fr. Murin and his friends would hang out by the river.

“The river was our kingdom.” he says. “We would fish, swim, cook some gross food on open fire, test bombs and home-made weapons, build huts, lead wars with guys from the other side of the village.”

Looking at him now, it’s hard to see him doing anything that a regular teenager would do. It takes someone special to be a priest, right? Not quite, as even Fr. Murin used to sneak out and lie to his parents — even if it was only once.

“I was dating this girl in my school…My friends, and the girl, talked me into going to the movies. I knew my parents both worked till 10:30 that night, so I made a plan to go. The only trick was to get home before them.”

He enjoyed the movie, and then successfully made the train. All was going good it seemed. However, the train stopped, and “after a 45-minute wait, I knew I would miss the bus, would have to walk home for five miles, and would not be home on time. So I made a plan to jump off the train and run home.” 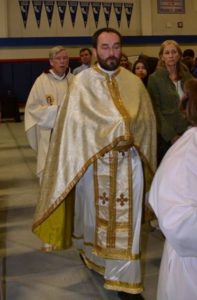 Who knew our beloved Fr. Murin was such a bad boy in his youth?

After running the five or six miles though the fields, he got home just before his parents and decided to do what any teenager would think is reasonable: Fr. Murin “decided to act out the ‘I fell asleep on the couch’ trick.”

His mother woke him up, and he thought he was safe — until he realized that his legs were all white from the dust of the dirt road. His mother knew he has not been at home, and similarly, she knew he lied. This was the last time Fr. Murin would sneak out and lie about it.

As he moved into college, he was called to the seminary, and so during the time that most of us will spend studying for our future careers and learning how to live on our own, Fr. Murin was becoming a priest.

“It was a military environment: we were on strict schedule, a lot of school work, our free time was usually taken by helping in parishes, doing youth trips, etc.” he commented. “In the post-communist Slovakia, our church has just emerged from decades of oppression — there was a lot of work. But in the midst of all those responsibilities, we had a lot of fun. You know how it is — put 150 guys in one building, with no TV, they will do all kinds of things. But, since my bishop may read this one day, I will hold those things a secret until my retirement age.”

He ends by offering some wise advice as he reflects on his mistakes.

“I regret time I spent in bad company. Friends who don’t build you up as a person but rather play on your weaknesses, people who laugh at real goodness, people who don’t try to better themselves — that’s a waste of time.”

Ms. Tracy Chadbourne’s childhood was difficult, and it’s a time she does not want to share.

“My life at home was rather unstable,” she says. “I never knew what was going to happen, and there never seemed to be a rhyme or reason for any of the madness.”

In school, she was the “nerdy class clown” but kept to herself. She got her first job at 14 and spent most of her time at work. School became a safe place, in comparison to her home.

“It wasn’t perfect, but it was a world that I could understand,” she says. “It’s only natural that I’ve spent my whole life in a classroom.”

However unfortunate, she has learned to draw positives from the situation.

“Whatever happened, those mistakes have made me who I am today.  It is so important to accept your past and move on,” the Spanish teacher says. “We all have a chance to change and grow, and mistakes are how we do that.” 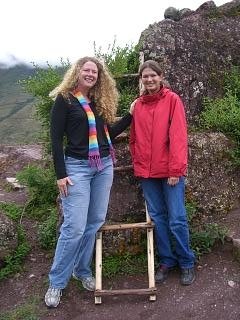 Ms. Chadbourne and her daughter at Macchu Picchu.

One of Ms. Chadbourne’s  craziest experiences was participating in a teacher exchange in Peru with her daughter.

“It felt like our lives were in danger every day from the myriad of things that could happen,” she says. “One day, we thought we would be run over by a speeding ambulance.”

She then added more near-death experiences to her list.

“There was the day we were riding a bus into the mountains on a very curvy, mountainous road, and I just knew that we would fall over the cliff.”

“The boat ride on the Amazon was treacherous, and I thank God every day that we lived through that one.”

“Every single day was an adventure,” she says quietly with a smile. “It’s beautiful to live our your dreams.”

Our experiences shape who we become, and however different and unique we are, we can be sure that if you do what you love, you will never have any regrets.

I urge you to find your magnificent seven, your river, your Peru. To never let your past bring you down and follow your passion.

Enjoy your reckless, naïve, romantic youth. And one day when you’re an adult, and you do taxes and own a house and have sons and daughters of your own, you can look back and laugh at how silly and inexperienced you were.