Open Mic Night. It in itself is considered to be an age old CB tradition, but what happens when a new crew steps up to coordinate all its’ fame and glory? The newbie coordinators I am speaking of, of course, are Kathleen Donovan (’17), Emily Feinstein (’17), and Ian Ferrell (’17), who were metaphorically passed […] 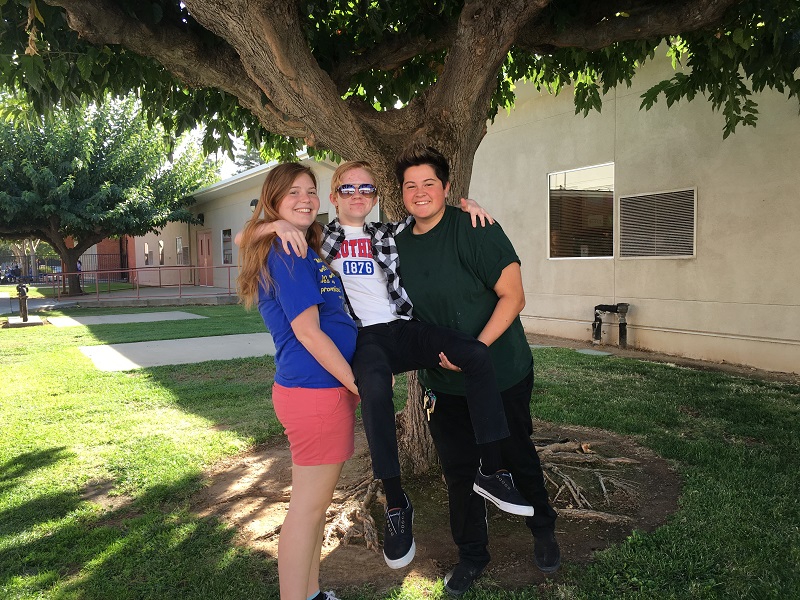 It in itself is considered to be an age old CB tradition, but what happens when a new crew steps up to coordinate all its’ fame and glory?

The newbie coordinators I am speaking of, of course, are Kathleen Donovan (’17), Emily Feinstein (’17), and Ian Ferrell (’17), who were metaphorically passed the leadership torch (or in Open Mic’s case, the famous talking stick Rafiki) during the last show of last year by previous coordinators, Kathryn Anoskey ’16, Liz Karalli ’16, and Tim Mendoza ’16.

But why these individuals? Why did they step up to the daunting task of not only running the shows and the club, but also writing original, appropriate comedy skits that appeal to a high school crowd?

“I knew I wanted to be an emcee [since] freshman year when I went to the first show,” says Emily.

She continued that, “Something about how the emcees drew the crowd in really caught my attention and inspired me, and I’ve been to every show since! As a decently outgoing person I figured it’d be quite an interesting job and I can’t wait for the first show.”

Both Emily and Ian mention that they really want to be positive figures who welcomed everyone onto the stage and encourage everyone to showcase their talents.

Ian also cites his desire to obtain the position from his love of being in front of others, saying that, “ [he] loves being in front of a crowd, and loves to keep a crowd entertained,” as well as “[wanting] to properly introduce the amazing talents throughout the CB community.”

He wants to make sure that everyone receives the recognition they deserve for the amazing things that they accomplish on stage.

Kathleen on the other has shamelessly admits that “[she] likes being in charge.”

But she quickly added that she does it really because she has such a love for performing, and for the club, and what it stands for.

“It’s really awesome to be in charge of something amazing as Open Mic” she concluded.

The other coordinators share her love for the club and all its accomplishments.

Ian credits it as “a great way to make new friendships, as everyone works together to make a really fantastic show.”

The atmosphere is what Emily really loves about Open Mic.

“Everyone is so warm,” she states, “Hearing the crowd get quiet as the lights dim and becoming completely caught up in a show full of great talent, it is just such a fun experience! I love it!”

But besides the wonderful new talent and attitudes of the new coordinator crew, why should you come see the show?

“People should come to the show to support all the performers who are brave enough to audition and show off their talent. It is really scary to put themselves out there and people should witness it,” Kathleen states.

“Also it’s a great show, so if you’re not coming to support, come to be entertained. There is a lot of talent at CB and at these shows it is certainly shown.”

Ian feels similarly, stating that “People should come to the show to support their classmates, and witness a lot of talents that they would never have noticed without seeing the show. And most of all, they should see it to have a good time! It’s a great way to spend a Friday evening and watch a lot of really cool performances!”

Emily summarizes their opinions by stating that “People should come to the show for so many reasons, but I’ll just list a few: you will see amazing talent, you will laugh, you will be around awesome people, you will see what we’re all about at open mic, and it only costs a dollar to get in! Promised a great time in a great atmosphere. Our stage is your stage.”

Their stage is truly yours if you want it to be. If you’re interested in performing, come out to auditions, and if you just want to see the show, come out the first one on October 21st for a great time with your fellow Falcons.