3…2…1! Your B Set teacher turns out the lights in the classroom and you hear the theme song blare through the campus. “People are you reaaaaaaady…let’s start the show…let’s start the show” CB has had the tradition of reconstructing the KBFT set every year to signify a new team of juniors coming in to inform […] 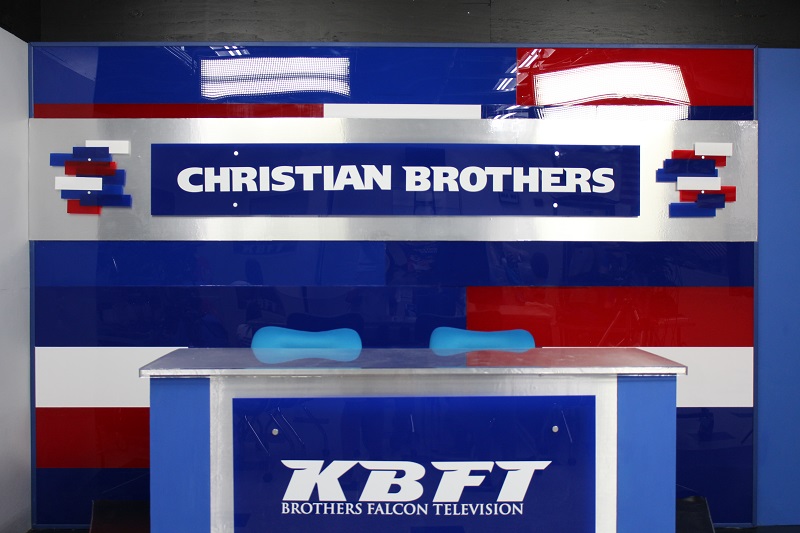 3…2…1! Your B Set teacher turns out the lights in the classroom and you hear the theme song blare through the campus.

CB has had the tradition of reconstructing the KBFT set every year to signify a new team of juniors coming in to inform us about the Talon Morning News. This year, the set has become a more permanent icon in the studio. The new set has shocked the CB campus with its modern, yet classic background. Our colors of red and royal CB blue are tied together with a metallic silver accent that makes it pop behind our outstanding junior anchors. The Talon went to find out more about this KCRA-worthy set.

“It took more than six weeks to build the set this summer,” says Mary Enos (’18), CB’s very own KBFT anchor. “The set is complete with a Plexiglas backdrop, clear lights that turn off and on, and a control panel underneath the one of the blue panels”.

The set was not the only thing that got a makeover, but the entire studio got a face lift.

“The studio is also was revamped with new TV’s, new computers, and new lighting that makes me feel like I’m on Fox News”, Mary says.

It is usually tradition to create a new set for a new year, but this year is a little different. Since so much work and time was put into this set, the blue, red, and silver set that resembles one of a professional news station will remain apart of the KBFT family for a few more years.

“The set was made so that every year it is the official set and if won’t be rebuilt anymore,” Mary says.

One of CB’s most beloved teacher and KBFT Program Director Mr. Brendan Hogan ’95, went into a further detail about what went into the new KBFT set.

“The set was designed and created by a Christian Brothers alum named Mina Mohadess ’09 and the maintenance facilities crew,” he shared. “As soon as school broke out for the year after Memorial Day, everything was torn out and they built the shell”.

Mr. Hogan told the Talon that Mina was a former anchor herself, producing the show as well as doing the sports segments.

Mr. Hogan says this set is supposed to last at least five or ten years, giving the up coming Video I sophomores something to look forward to.

“Instead of spending the usual budget for one year, we decided to go all out so this set and have it still last us awhile,” Mr. Hogan said.

This new backdrop is setting the stage for a great season of KBFT.