Family On The CB Campus: Can You Relate?

Siblings, cousins — we all have them. But what happens when they have also taken or are taking a trip through Christian Brothers? Kathleen Donovan (’17) has had three siblings and quite a few cousins go through CB before her, and has quite some wacky tales to tell. It all started before she was […] 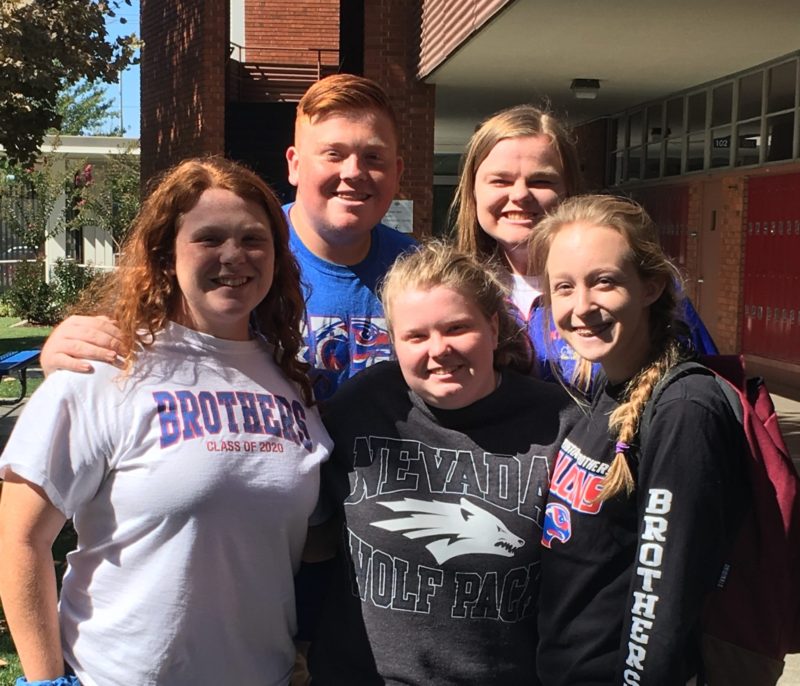 Siblings, cousins — we all have them. But what happens when they have also taken or are taking a trip through Christian Brothers?

Kathleen Donovan (’17) has had three siblings and quite a few cousins go through CB before her, and has quite some wacky tales to tell. It all started before she was even a student.

“Well, my shadow day in 8th grade with [my sister] Erin Donovan ’15 consisted of many people going, ‘There’s another Donovan!!’” she stated. “Apparently four kids is a lot.”

As soon as she actually started attending Christian Brothers, the teachers caught on that she had already had some family come through. In her freshmen year, she had Ms. Loretta Kenney, who had had all of her siblings and a couple of her cousins before.

“One day she was talking about [it] with me and just started laughing hysterically,” Kathleen commented. “I think it broke something in her.”

“Mr. Paul Havey ’81 had my sister Colleen Donovan ‘13 before and kept mixing up our names,” she mentioned.

It got so bad, she says, that the religion teacher had to start calling her “Donovan” because he couldn’t keep their names straight. Another member of the class even wrote “Hey Colleen” in her yearbook as a joke. Older students also caught onto the Donovan trend.

“My freshmen year, Dylan Santana ’14 couldn’t remember my first name, but could remember I was the youngest of my siblings so he called me ‘Lil Donovan’ the entire year,” Kathleen recalled.

Sophomore Siena Mazza (’19) is going through a similar situation. The student body and teachers also recognized her as a sibling on her shadow day. She jokes that when she shadowed in Mr. Tom English’s class freshman year, he almost didn’t give her candy, which he customarily gives to every shadow.

Since then, though, Siena has gotten used to Mr. English’s various comments about her and her brother Dante Mazza ’15.

She comments that “[she doesn’t] really mind [his remarks] because it’s become kind of a side joke between [her and Mr.English].”

But it wasn’t just Mr. English bringing up her brother on a daily basis.

“During freshman year, almost all my teachers made comments about Dante, and some of them still ask me how he’s doing when I’ll see them,” she states.

Similar to Kathleen, Siena mentions that “a lot of seniors refer to me as Little Mazza.”

“Some of them who I don’t even know will see me into the hallway and say hi to me and then tell me to say hi to Dante,” she remarked.

The whole situation used to annoy her and make her feel pressured, but since it has died down over the years, she feels that she has established herself as an individual, and that she laughs about all the old times when teachers would compare her to her brother.

Another student that deals with having to explain her family relationship all the time is Gabrielle Airola (’17). Since she has a cousin in her own class — Donya Airola (’17) — she gets plenty of questions about being related to her, most just based on the fact that they have the same last name.

And since they don’t look particularly alike, it can be very confusing for everyone to fully connect the dots. Gabrielle stated that during her junior year, she had to transfer into a different Spanish III class after Christmas break. Normally this would’ve been no big deal, but the class she transferred into was the same one her cousin was in.

“Mr. Tomás Capogreco ’86 didn’t know right away that we were cousins, so a few days in, when he found out, he was shocked,” she stated. “He kept looking between us, he couldn’t believe [that we were related] because we look really different and we have pretty different personalities.”

I also have had a similar issue, because my cousin, Kacey McCarley (’17), is in the same class as me as well. From the assumption of us being twins to us just being generally related, we’ve heard every family relationship in the book on the first day of school during attendance.

During freshman year, we both had Mr. English, and he called us the “Good Cousin” and the “Evil Cousin”. In classes we had together, getting up and switching papers that got passed back to the wrong person was a routine activity.

But that was when it was just us. Since we moved up to being sophomores, one cousin has entered the school every year after us. I can only imagine how much confusion the freshman teachers harbor when another McCarley walks into their room every year.

But in the end, family will be family right? We all love and appreciate having our family members with us at school whether they are actually present or just present through the constant comments of our lovely CB teachers.