You are here: Home \ Arts \ Featured Posts \ All That Jazz — And Desserts
Arts
0

All That Jazz — And Desserts

Christian Brothers High School has a truly remarkable arts program, especially during a time when the arts are being cut from many high schools altogether. With the recent addition of the George Cunningham ’40 Performing Arts Center, CB’s music programs have more opportunities to showcase talent than ever before. Most students know what Open Mic Nights are. The Christmas Concert […] 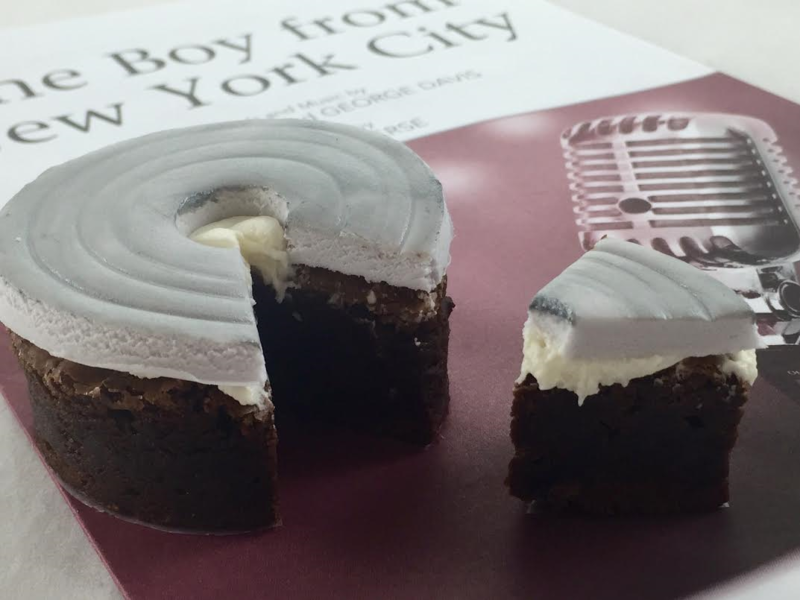 Christian Brothers High School has a truly remarkable arts program, especially during a time when the arts are being cut from many high schools altogether. With the recent addition of the George Cunningham ’40 Performing Arts Center, CB’s music programs have more opportunities to showcase talent than ever before.

Most students know what Open Mic Nights are. The Christmas Concert is pretty self-explanatory. And Hollywood Bowl is all the way in May — so that’s a publicity problem for next semester.

But what about Jazz Dessert? This unique concert is virtually unknown to the student body, yet it’s one of the most fascinating events of the year. The Talon went backstage to get the details.

First, the essentials: the concert is October 7th at 6:30 p.m. in CB’s new theater. Desserts, provided by students, are served beforehand and afterwards. It’s also the only collaborative concert between the band and choral programs, featuring Jazz Band, Vocal Jazz, and De la Femme as well as several soloists.

It was traditionally a spring concert, but as of last year, it moved to the fall. Mr. Travis Maslen, CB’s band teacher and the concert’s major organizer, revealed the reason behind this shift.

“Because of the musical…Jazz Dessert used to be a first-week-of-March kind of thing, but now that we have a theater, they have to do all of the set designs and all that stuff,” he says. “So we do it in the fall so we can utilize all of the stage.”

This was quite a change, as for the past 13 years, Jazz Dessert had been held in the gym. Mr. Maslen describes the ambiance of the previous concerts.

“[Jazz Dessert] used to be a lot longer…Food was just always out, and it was a little more elaborate. The idea was to provide two hours of music with no breaks, and then people can mingle around, have desserts, it’s fine if they talk in the background.”

For some of the seniors who’ve performed at Jazz Dessert in the past, the switch of locations wasn’t entirely positive. Dave Del Rosario (’17) reminisced wistfully of concerts past.

“I like the feel better in the gym,” he says. “It’s more interactive: you can walk around, there’s food set up, and I like the vibe more.”

The new setting of Jazz Dessert definitely brought some major changes last year. For starters, the concert’s biggest attraction — the desserts, obviously — can’t be eaten inside of the theater, which transforms the whole atmosphere of the night. This splits the night into three parts: desserts, jazz, and more desserts. However, the many benefits include a more professional environment, better lighting, and vastly improved sound quality for both the audience and the performers. 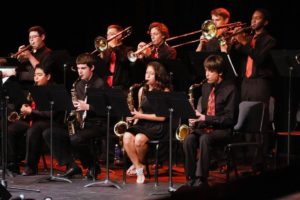 Is that Louis Armstrong? No, it’s CB’s Jazz Band, dazzling the crowd with its smooth, sultry tones

“Now it’s more of a concert setting, but we decided to keep the style kind of light by making it a variety show, like ‘This group’s going, oh now there’s this song,'” described the band director.

Mr. Maslen made a comment similar to Dave’s about the tone: “It had a different vibe to it than it had in the past when we used to do it in the gym.”

However, Mr. Maslen definitely sees the advantages of the new style.

“Last year’s concert was really fun too,” he says. “[The performers] rotated a lot, and it seemed to be a really good mix. The audience really seemed to enjoy that formula.”

Desserts are now served outside before and after the concert to accommodate the theater’s policies. Mr. Maslen thinks that this adds a really neat element to the show.

“People tend to hang around for another half an hour and just talk, and all the musicians are outside…It’s kind of nice. It’s not like after a concert where everyone pretty much just goes home and then it’s over. This is like, ‘Stay a while, have some desserts, talk, take pictures,’ so it kind of made it more of a fun event.”

Even though summer is already a distant memory for most students, the reality is that Jazz Dessert is less than two months into the school year. None of the groups have very long to prepare, especially considering that jazz is one of the most difficult genres to learn. 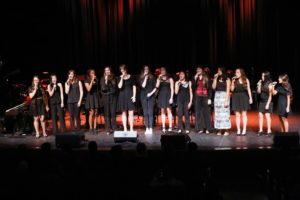 “It was a lot of fun, though,” he added quickly.

“At first I was nervous to perform a song that we had just picked up a few weeks before, but every worry about the performance went away as we sang to the audience and enjoyed the entertainment of the night.”

Last year’s concert was an overwhelming success; there’s nothing quite like the feeling of walking offstage to a round of deafening applause after performing your heart out. For a handful of students, one group simply isn’t enough. Yisa and Jonathan Claridad (’17) are two of the several performers juggling multiple groups this year. Although the sense of accomplishment doubles, so does the stress of quickly learning complex songs.

Yisa performed with De la Femme last year and decided to add Vocal Jazz at the start of this year. 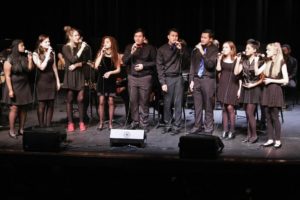 The sweet harmonies of Vocal Jazz astound the audience

“I’ll admit that singing in Vocal Jazz is actually more challenging — and sometimes frustrating — than I’d thought it would be, but in the end, the spoils outweigh the toils,” she laughs. “Keeping up with my De la Femme responsibilities has also been harder while I’m getting used to Jazz, especially with my lovely academic load (junior year, man). But both groups have been incredibly rewarding so far, and I’m really excited to put everything together at the concert!”

“I definitely have a lot to learn for both groups,” says Jonathan of his Jazz Band and Vocal Jazz combination. “But it’s coming along great.”

All of the performers have certain aspects of Jazz Dessert that makes it special for them.

“Normally, it’s a very different experience when the jazz band [plays] or jazz choir sings, but when it’s the entire show, it really allows you to get a taste for all the different types of jazz music,” Jonathan comments.

“One of our Vocal Jazz songs is a Pentatonix arrangement, so obviously all of us choir nerds are pumped about that,” Yisa says with a chuckle.

“I really really like our songs this year,” Cal declares excitedly. He reveals that he actually prefers Jazz Dessert to his performances with Honors Band. “Jazz music is my favorite music to perform. It’s harder music, but with the challenge, when you get the songs right, it’s a really rewarding experience.”

“Jazz Dessert is an opportunity for Vocal Jazz, Jazz Band, and De la Femme to become more to students than mere names heard around campus,” Yisa explains. “I’m currently singing more songs and genres than I ever thought I could. The satisfaction of making an art with my voice and struggling through the things that I love to do are what give me the drive to keep going.”

Jazz Dessert is a truly unique chance for some of CB’s most talented students to share their gifts with the entire community. Don’t forget to come experience the magical night for yourself on October 7th. And as Dave so perfectly stated, hopefully you’ll get “some tasty jazz and some tasty desserts.”