On the 10th of September, like thousands of other people, I spent my evening losing my voice while cheering for the beloved Falcons on the football field. Full of optimism, I was enjoying myself in the front row with my fellow brothers and sisters during the second quarter when Chase Mehlhop (’17) strolled up to my […] 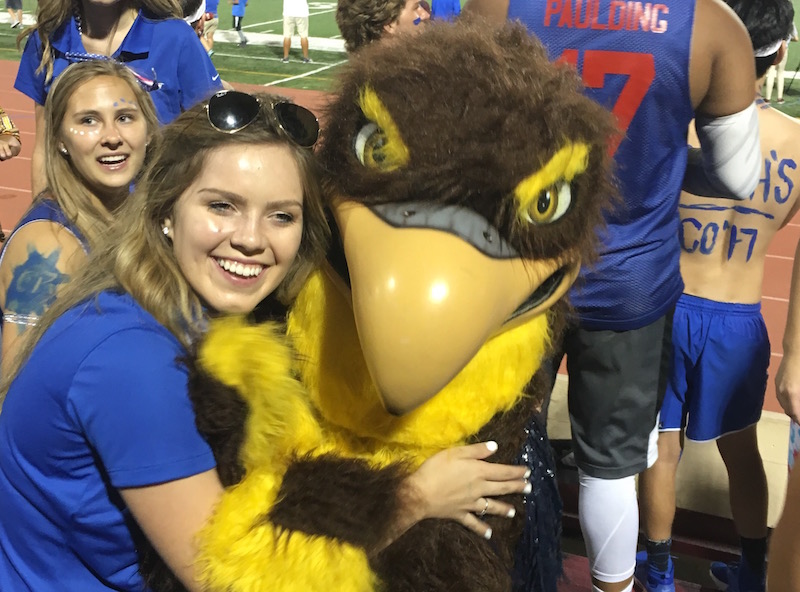 On the 10th of September, like thousands of other people, I spent my evening losing my voice while cheering for the beloved Falcons on the football field. Full of optimism, I was enjoying myself in the front row with my fellow brothers and sisters during the second quarter when Chase Mehlhop (’17) strolled up to my group of friends.

Decked out in CB spirit wear, Chase quickly explained that the go-to Falcon was unable to shake his tail feather that night so he offered up the mascot costume to anyone who felt like taking the unusual opportunity.

I sat there and immediately said no. There was no way I was going to put myself inside of a dirty, suffocating bird outfit.

Right after I denied the seemingly repulsive request, I was immediately struck with a hit of reality. This is my very last Holy Bowl as a Christian Brothers student. This is my senior year. My last hoorah. So of course, I have to go out with a bang. I have to spread my wings and fly.

I jumped off the stands and reluctantly followed Chase through the crowd and down to the side parking lot where he stopped me in front of an SUV. Behind the vehicle, there was a duffel bag slumped over on the concrete, large enough to fit an entire football player. He immediately opened the bag and exposed the disassembled parts of the famous bird.

I was in shock, wondering how many people have been in this exact outfit. I started to ask Chase how bad this was going to smell when he handed me an ice pack covered in fabric. The sun had already set and I was not planning on staying in the costume for more than five minutes, so why on Earth was this necessary? As I turned away the chilly gift, Chase looked at me and said, “Trust me, you’re going to need this.” I took his advice with a bit of hesitance and I wrapped the pack around my stomach.

Then Chase zipped me up in the body and wings. The material was rough and a bit challenging to move around in. One foot at a time, I stepped into the fuzzy legs of the falcon which closely resembled some bright yellow leg warmers I would find in my mother’s closet in the ’80s. With those came ginormous feet that were almost the size of volleyballs. And of course, the finishing touch was the bulky head that Chase placed on mine, reminiscent of crowning the next queen.

I could barely see. There were little speckled holes though the eyes and mouth, but I heavily relied on Chase’s arm as I walked back up the stairs and toward the crowd. He warned me not to talk in order to keep the effect in place. Approaching the roar of the flock, however, I immediately heard bursts of cheers and forgot his seemingly simple demand. I hobbled around and did some dancing to please the spectators. I ran up to people I knew and yelled, “It’s me!” I soon felt random bodies walk up close to me. To my surprise, people were taking pictures with the falcon. I caught myself smiling and quickly comprehended the fact that no one could see me inside of this flying creature.

The fans began to shout once again, but I had no idea why. I was immediately disappointed because I thought I missed a touchdown. I didn’t, but something good definitely happened on the field and I still have no clue what it was.

I never knew how to react. Because I wasn’t fully steady on my two big feet, I constantly ran into people walking by and hitting them with my protruding beak. Top-heavy and smaller than most, I stood by Falcon Force hoping that if I followed their lead, everything would work out just fine. Some of the Falcon Force members even mistook me for the former man behind the mask as they explained the game plan for halftime. I felt so included in the behind-the-scenes action of what makes our cheering section so enthusiastic.

After about 15 minutes of adrenaline rushing through me, I was able to acknowledge that I was completely drenched in sweat. I had hair in my face that wings were unable to adjust. Initially denying the cool feeling on my core was a rookie mistake. I walked around looking for Chase and concluded that it was time to let down my facade.

Returning to the crowd as just another CB student, I had gained a newfound appreciation for the life of the bird. I was relieved to be out of the uncomfortable costume after only a quarter of an hour, so I can only imagine how intense it gets during an entire sporting event or rally. It is truly a gift that people are able to keep the spirit alive and engage with our fans for so long. As a retired Falcon, it is safe to say that this experience was truly one of a kind — something that only talons could fully grasp.