A trickle of sweat drips down the forehead of an anxious freshman. Eyes dart back and forth. Tension crackles through the air like lightning. Yellow chalk dust hangs thick in the room. Ms. Marian Shackel has just breached Fort 402. “It gets really quiet,” says Alex Bagatelos (’20), one of this war’s many pawns. “Everyone’s […] 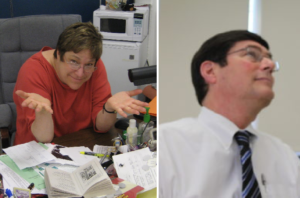 A trickle of sweat drips down the forehead of an anxious freshman. Eyes dart back and forth. Tension crackles through the air like lightning. Yellow chalk dust hangs thick in the room.

The most infamous classroom on campus

“It gets really quiet,” says Alex Bagatelos (’20), one of this war’s many pawns. “Everyone’s kind of waiting for something to happen — [there’s] a lot of anticipation.”

Mr. Tom English and Ms. Shackel are infamous among CB students for their eternal battle of wits. Each mentions the other extremely often — at least once or twice a class period, according to both freshmen — and the comments are rarely flattering. Their fascinating relationship is quite well-known, yet still mysterious. Is the legendary conflict really as old as time itself? The Talon braved the front lines to get the stone(Age)-cold facts.

Both teachers agree that the feud first began when Ms. Shackel started teaching freshmen, with the literature teacher adding that she then “was somehow in competition with Lord Voldemort.”

“Mr. English is always being mean to me,” she claims. “He’s making his students say things in my class that I know are patently false.”

Too often, their freshmen are caught in the crossfire between the two commanders. Ms. Shackel offers her advice to limit casualties.

“Never come into my class and say, ‘Mr. English is my favorite teacher’ because that just makes me go ballistic. And see him for who he truly is: evil incarnate.”

Mr. English, on the other hand, says with a sardonic grin to “always be nice to me, and treat her mean.”

Some of the shots fired in this epic war include a lengthy theory of Ms. Shackel’s explaining how Mr. English “has a portrait of himself in the attic that’s getting totally decrepit, à la The Picture of Dorian Gray,” which reflects “who he truly [is].”

Never a gray hair in sight!

And unsurprisingly, Ms. Shackel is among those who believe that he must color his hair.

Mr. English brought out the big guns when he declared that Ms. Shackel considers herself a really good baker, but in reality, “she’s not a very good cook.”

“He likes to drink wine out of a box,” scoffs Ms. Shackel at his ability to judge quality.

Of course, freshman year is only one battlefield. Ms. Shackel also teaches AP Literature to a select group of seniors, most of whom have already had both teachers. While the loyalty of the freshmen is questionable, by the time these students are seniors, Ms. Shackel “absolutely” considers them to be in her army.

Among the many novels that she covers in this class is Dante’s The Inferno. The two teachers appear to call a truce for about a week to allow Mr. English to go over the text with the class, which many believe is because of how much he loves Dante’s works — just see the poster behind his desk for confirmation. But Ms. Shackel clarifies the real reason she allows Mr. English into her classroom.

“I would like the Devil to take my students through Hell.”

So is there an end in sight to this timeless tale? According to Ms. Shackel, ceasefire would only occur “if [she wins] the lottery and leave[s] CB.”

Mr. English, ever the history teacher, states that “eventually we all die.”

“Whoever dies last will probably put something on top of the other’s grave,” he relents, “making the final comment.”

Both instructors are formidable in their own rights. Some students, such as Audrey, are more frightened by Ms. Shackel “because she seems a lot more strict,” while others, including Alex, fear Mr. English more — no explanation needed.

However, it’s safe to say that whichever side students find themselves fighting on, everyone would rather just sit back and enjoy the fireworks. 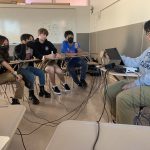 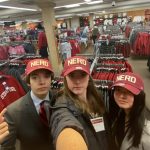 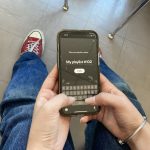