Patting your head while rubbing your stomach. Climbing Mount Everest. Writing your first Talon article. Making Kanye smile. Some seemingly impossible tasks, yet nowhere near as labor intensive as some of the courses offered here at Christian Brothers. The Talon interviewed students about what the toughest subjects have been so far as well as […] 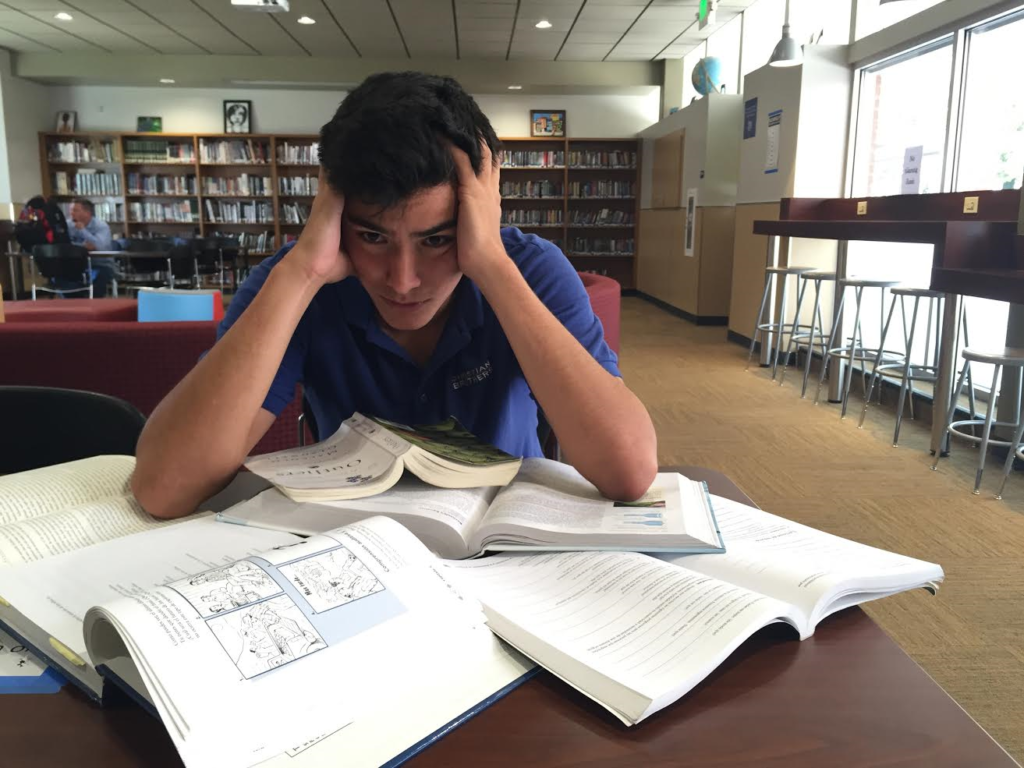 Patting your head while rubbing your stomach. Climbing Mount Everest. Writing your first Talon article. Making Kanye smile. Some seemingly impossible tasks, yet nowhere near as labor intensive as some of the courses offered here at Christian Brothers. The Talon interviewed students about what the toughest subjects have been so far as well as some of the teachers in charge of them.

Rebecca Mazur (’17) trembles at the thought of her past rigorous courses. Without hesitation, she confirms that her final answer is AP Biology.

“It was a lot of homework and hard material and big words I couldn’t understand and still don’t know what they mean,” she recalls.

She was drawn to the concept of taking the class but quickly recognized that she was sorely mistaken. After countless hours of tears and confusion, Rebecca ranked the subject candidly.

“-5/10, would not recommend unless you want to live a year in sadness and despair.”

Regardless of rumored fears, Mrs. Nicole Brousseau, the AP Biology teacher, continues to have great expectations for her students.

“I hope that they feel like they have learned a lot, that they have fun while they learn, and that I make them think differently about science.”

In regards to what students like Rebecca feel, Mrs. Brousseau acknowledges why AP Biology has this reputation.

“I think the pace that we have to go makes it the most challenging,” she says. “At the pace that I want, we would spend a lot more time on certain topics.”

She works to ensure that her students have a general understanding of every concept so that they will succeed on the AP test in the spring. She also confirmed AP Biology’s relevance in everyday life.

“It’s important to know about the world, the interactions, and our impact on the world as well as what a miracle that all living critters are.”

Some may consider this to be the hardest class ever, but Mrs. Brousseau guarantees that it is in fact “The Best Subject On Campus!”

Navneet Khaira (’18) reflected upon her freshman year when she considers her most difficult subject: Honors Algebra 2.

“It was one of the first classes that I had in the day, and everyone was a sophomore or a junior which was really intimidating,” she recalled.

She confirms that it was not the material itself that was rigorous, but rather adapting to a higher workload and amount of studying. With some time to adjust to high school and a new teaching style, Navneet was successful in a more challenging course.

“There has not really been one single hard class for me, rather together they are difficult in certain respects, and I had to start to take time to choose between spending time with friends or studying a little more,” the junior says.

Navneet also adds one of her current subjects, AP Spanish, to her list of strenuous academic classes. Attempting to become fluent in another language has its preconceived obstacles, but they are no match for many students who excel in AP foreign languages.

“Right now it’s just a lot of work to complete at home with so many worksheets and lots of preparation for projects.”

She also feels some pressure with her fellow excelling Spanish classmates, but she is properly making time to handle the new work load.

Mrs. Adriana Mundo empathizes with her AP Spanish students suffering at the beginning of the year.

“I think that they like it — I try my best to make the class enjoyable for the students,” she says. “I can see that right now since it’s only the third week that some of the students are a little worried about their Spanish and how they talk.”

As the year continues, however, the beloved Spanish teacher has no doubt that her students will reach their fullest potential.

“I have a good feeling about this year because pretty soon they are going to start feeling more comfortable. I can see that a lot of students love the language.”

Señora Mundo plans to make their love flourish beyond just the language itself.

“I also hope that they can have an open mind about different people and cultures,” she says.

Putting one’s knowledge to the ultimate test may seem unbelievably daunting, but a little determination and an unlimited supply of coffee can really go a long way.