You are here: Home \ Falcon Sports \ Featured Posts \ Middletown: One Hill Of A Trip
Falcon Sports
0

Middletown: One Hill Of A Trip

Beautiful views, hard runs, good food, and great friends. The Christian Brothers cross country team’s traditional trip to Middletown, little known to most CB students, is a unique and meaningful experience that participants will carry with them for the rest of their lives. On August 26, 2016, the Christian Brothers cross country team embarked on […] 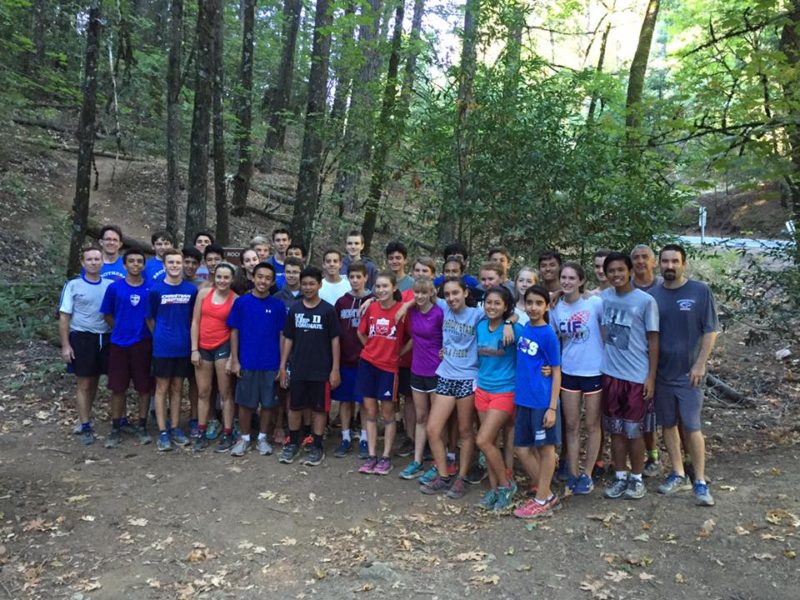 Beautiful views, hard runs, good food, and great friends. The Christian Brothers cross country team’s traditional trip to Middletown, little known to most CB students, is a unique and meaningful experience that participants will carry with them for the rest of their lives.

Runners stay on the property of Mrs. Janet Rosenthal, mother-in-law of Coach Danny Delgado ’79. When Coach Delgado first started the trip in 1990, there were only seven runners on the team and they all stayed in Mrs. Rosenthal’s home. 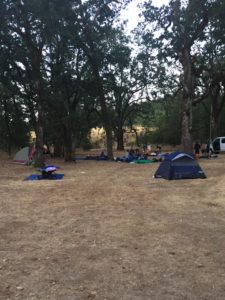 The campsite of CBXC during Middletown weekend

However, as the team grew, this became logistically impossible, so the runners began camping outside. Sleeping outdoors has become an integral part of the trip and contributes to its overall purpose.

“Some kids have never slept outside or gone camping,” Coach Delgado explained. “So if [the trip] gives students a better sense of the joy of being outdoors, I think it’s served its purpose.”

In addition to spending their nights outside, runners spend most of their days exploring Middletown. When they’re not running, they swim, canoe, or kayak in the pond, play cards or ping pong, or just hang out. Teammates get to know each other during the downtime throughout the trip, making new friends and strengthening existing friendships.

Amelia Poroli (’18) says her favorite part of Middletown is “going to the pond because it’s relaxing, especially after one of our hard runs” and because she “really likes swimming.” The trip is truly special, explains Amelia, because it “gives you a chance to get to know your teammates better as well as the freshmen coming in — and it’s only for cross country.”

While team bonding proves to be one of the most important aspects of the trip, the runs in Middletown play a critical role in strengthening the team as well. The days begin with the emphatic sound of music blaring from the van, signifying the fact that everyone better get up because the team is going on a run in 30 minutes. The bone-chilling morning air makes getting up almost as hard as the run itself. On Saturday morning, the team heads to Mount St. Helena for a 45-minute uphill run, by far the most physically demanding run of the weekend and possibly the most difficult run of the preseason. However, despite causing lungs to burn and legs to cramp, the mountain presents the runners with a silver lining: the views are gorgeous. The entire Napa Valley is visible from the top of the mountain. 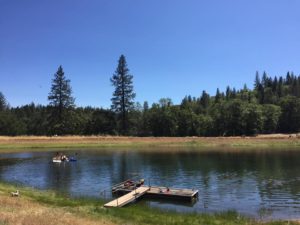 This is the pond in which runners are able to swim, boat, and even fish if they so choose.

Next, the team runs 800-meter repeats Saturday evening, and on Sunday morning there’s a 40-minute out-and-back run. These workouts are specifically designed and chosen for the trip in order to push the runners to become faster and stronger. The higher altitude also benefits the runners by acclimating them to a lower oxygen concentration in the atmosphere, making it easier for them to run at lower elevations.

Traditionally, CBXC runs at Boggs Mountain on Sunday.  Unfortunately, this year a run at this location was not possible due to the devastation of the 2015 Valley Fire, which decimated the entire forest in Boggs. The team drove by the mountain this year and was shocked by the stark transformation it has undergone. This fire also destroyed almost half the town, leaving the Middletown community with the daunting task of rebuilding. Over the past year, considerable progress has been made to restore Middletown, but there’s still much work to be done.

Despite the changes that have come to both the team and the environment, the Middletown trip has retained the core elements that make it so special. Middletown veteran Kelsey Wong ’11, reflects that although she and her team “didn’t have to worry about a drought,” and when they went, “Old Man’s Pond wasn’t burnt to a crisp,” the trip is always “just really fun, to be constantly running and eating, [and] a really good time to bond as a team.” 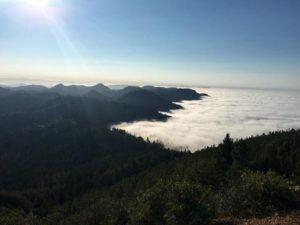 A breathtaking view (literally because of the high altitude) from Mount St. Helena

The camaraderie among teammates that forms during this trip will last not only through the cross country season, but also throughout all of high school and beyond.

Middletown over the years has become vital to the team’s success during the season and in seasons to come. 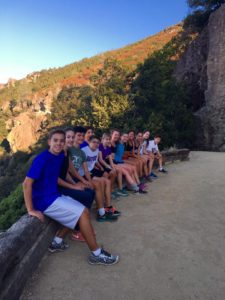 A group of runners stop for a picture and admire the view on Mount St. Helena.

Summer running creates a base for runners when the season starts so they have the cardiovascular endurance for the increasingly difficult training runs during the season.  The opportunity to go on the Middletown trip is a good incentive for runners to work out over the summer.

Coach Delgado recently instated a 100-mile minimum to run over the summer in order to go on the trip because some students had been joining the team solely for Middletown and subsequently quitting. This summer running quota also improves the overall health and fitness of the runners which enables them to have more successful seasons. Although running 100 miles during the summer is hard, Christian Brothers cross country runners believe it’s worth it because of the great times they’ll be able to spend with their teammates in Middletown.

Senior Will Yuponce (’17), who has attended Middletown all four of his years of high school, conveys the importance of the trip.

“It’s the time when I get to meet the new teammates…and it’s a tradition, one of the things we do for cross country.”

Doing summer running, he claims, is essential to surviving Middletown workouts because “the altitude change is really tough on breathing…and the…run up Mount St. Helena — that’s like this gigantic hill…it’s not fun so it’s good that we’re kinda conditioned for it.”

It cannot be emphasized enough how much this trip means to the cross country program. Year after year, when runners look back on the season, Middletown is always a highlight.

“[The trip] has built on itself and helped create the culture of the cross country team,” according to Coach Delgado.

However, Middletown’s success does not merely derive from its nature. Its immense impact on current and past runners alike is a testament to the tremendous efforts of Coach Delgado and his family and their dedication to Christian Brothers and its cross country team.

The twentieth anniversary of the Middletown trip will take place in the fall of 2017. Enduring for almost twenty years, the Middletown trip has withstood the test of time and established a legacy that will continue long into the future. This one of a kind experience with its impromptu dance parties, daredevil jumps from a cliff into a deep pool of frigid water, and mountain runs that make mountain climbing seem easy cannot be replicated. The only way to truly learn the magic of Middletown is to experience it.