Business In The Front, Party In The Main

The Front Office. The Main Office. What’s the difference? Is there a difference? The Talon asked these very questions to several students in the Christian Brothers Community. The most common reactions were confused expressions, shrugs, and the simple phrase, “I don’t know”. Jaela Harding (’17) knew about the Front Office but has remained in […] 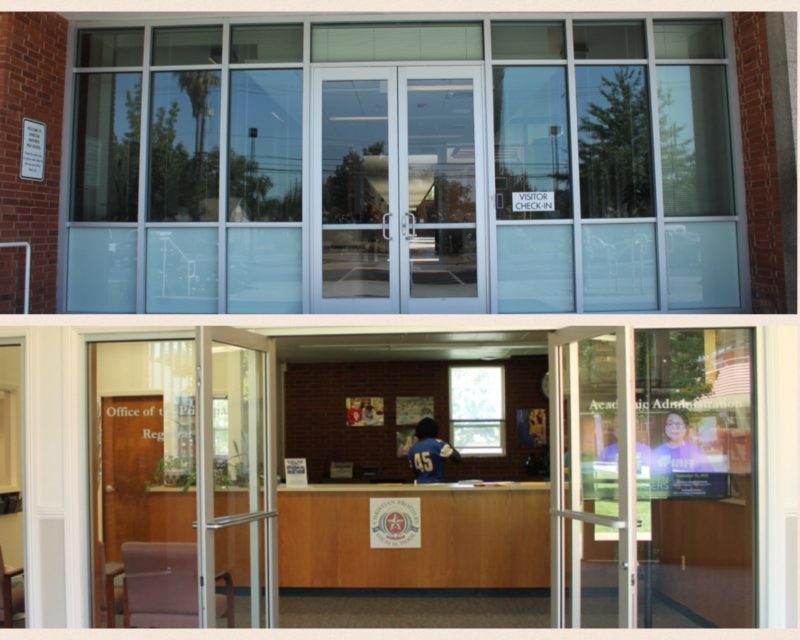 The Front Office. The Main Office. What’s the difference? Is there a difference?

The Talon asked these very questions to several students in the Christian Brothers Community. The most common reactions were confused expressions, shrugs, and the simple phrase, “I don’t know”.

Jaela Harding (’17) knew about the Front Office but has remained in the dark about the Main Office.

“I didn’t know that the place existed until sophomore year”.

To begin — the Glass Fortress. The Eye of the Falcon. The Front Office. 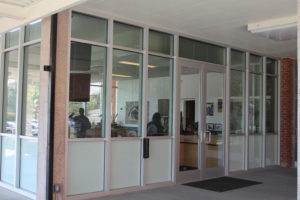 The Eye of the Falcon–The Front Office

Administrative Assistant to the Deans/Attendance Ms. Susanne Pierson gives the Talon a clear view of her role at Christian Brothers High School.

“My job is daily attendance and to account for every student that comes to school here whether they are on or off campus,” she explains.  Ms Pierson’s daily responsibilities also include the bulletin, administering re-admit slips, and checking early dismissals.

She works alongside Administrative Assistant Ms. Traci McMullen ’83, who is also in charge of facilities and runs interference. If you’ve ever been running late to school, you have probably tried to convince Ms. Pierson or Ms. McMullen that “traffic was really bad this morning…” excuse so you wouldn’t be tardy.

That makes sense. But what does the other office do?

The Walled Wooden Warrior. The Belly of the Beast. The Main Office. 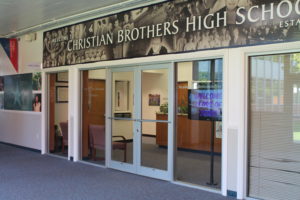 The Main Office–The Belly of the Beast

Administrative Assistant to the Vice Principal Mrs. Donna Adam is always busy, but took time to explain her role in the Main Office.

“I greet people at the counter, I answer the main phone lines, I sort the mail, [and] I troubleshoot,” she says, listing many of her daily tasks.

Mrs. Adam also assists teachers and students with smaller issues, such as helpful reminders of the set rotation or fixing the copier machine. She must juggle her responsibilities as she assistants Vice Principal Mr. Tom English and teaches an AP Art History class.

“It’s a job that is very diverse and no day is like another,” Mrs. Adam concludes.

Mrs. Adam is not the only one that works there.

“The Main Office is for the administrators — so the principal works here, the two assistant principals, [and] the deans.”

The two offices are very different: different people, different functions, and different locations. So why does all of this unnecessary confusion still exist?

Ms. Pierson has a theory:

“The Front Office has [only] been here five years, so there [used to be]  just one office,” she explained. For a long time, the Main Office had been the only office on the CB campus.

Still, none of the student body has been here for six years, so why is there still an issue?

Mrs. Adam has a different idea:

“Most people are used to one central office, so having two offices might seem unusual.”

It makes sense to have one main office, but the separation of the two has proven to be a more efficient system for the school and both offices are spacious instead of crammed.

Names could also play a part in the uncertainty. The Front Office is also known as The Eye of the Falcon, and both offices are commonly referred to as “The Office”. The Offices could be called, “The Attendance Office” and “The Administration Office”.

Also, the Front Office has a more visible location, right at the front of the school, while the Main Office is hidden between the senior and sophomore hallways. The different locations are necessary, since the Front Office is right at the entrance of the school to track all incoming and outgoing people, and the Main Office remains in its old location, which also accommodates the administrators who teach classes.

Perhaps the best explanation for the misunderstanding is obvious: no one teaches students the difference.

Though the disorder causes stress and confusion, Ms. Pierson and Mrs. Adam are both proud to serve CB.

“I help people in the best way I can,” says Mrs. Adam, “whether it’s a student, staff member, parent, an alumnus, or a member of the community.”

Help on, Mrs. Adam. See you in the Main Office.

Or was it the Front Office?