How did I feel after last year’s Holy Bowl loss? They say there’s no such thing as a dumb question…but that’s an exception. I speak for the whole Varsity football team when I say that disappointment doesn’t even begin to describe our feelings after that game. We let down the fans once again, sending the […] 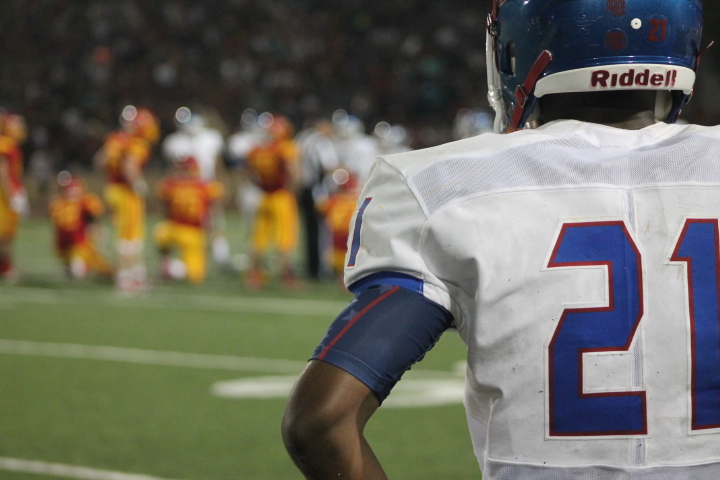 How did I feel after last year’s Holy Bowl loss?

They say there’s no such thing as a dumb question…but that’s an exception.

I speak for the whole Varsity football team when I say that disappointment doesn’t even begin to describe our feelings after that game. We let down the fans once again, sending the 1,000+ CB students home with yet another loss.

But a part of me was excited, hopeful even.

For as long as I can remember, there has been a looming lack of confidence in the CB Varsity football squad when Holy Bowl season comes around. Yes, it’s true — we’ve lost the past seven years in a row. Key word: past. Those losses are in the past. This is a new year, and our team is compiled of a passionate senior class and a talented squad of juniors. So I set out to discover why students at Christian Brothers have so little confidence in the football players and how that mentality affects the team.

I caught up with Brenna Patterson (’17), who represents every student that expects our football boys to fall short.

“It’s not that I don’t have confidence in the football team and the players’ abilities. It’s that every year they say, ‘This is the year we’re going to win Holy Bowl,'” she comments. “I don’t know whether or not they actually believe that or if they’re just trying to hype it up.”

Brenna is well aware of the fact that those in and around the football team may not take kindly to her words.

“They say that but we never actually win Holy Bowl, so it’s kind of like the ‘Boy Who Cried Wolf’ analogy. The boy continues to cry wolf and people stop believing him! And so I just stopped believing that we’ll win Holy Bowl.”

Brenna didn’t sugarcoat anything, giving us an accurate look through the eyes of many students.

So I went to the most passionate football player on the team, who has an 0-3 record of Holy Bowls but still loves his chances this year.

“[Brenna’s words] don’t bother me that much. We have a great student section; I like how everyone comes out to Holy Bowl to support. So it’s not the student section that I have a problem with — it’s this mentality around school. Anytime it comes up in discussion, there’s always those few kids who doubt us. And that mentality is toxic,” preaches Matthew DeSimone (’17). “That affects our play on the field.”

Matt kept up his positive attitude throughout the interview, stating without hesitation that he has “the utmost amount of confidence” that this year’s team can win Holy Bowl.

“We’ve got a solid run defense,” he explains. “I think they have gotten really great.”

Matt continued quickly, believing in every word that exited his mouth.

“And on top of that, Jesuit is going to pass a lot. And our pass defense is playing really great. Plus it’s Jamarri Jackson’s (’17) first game this season. I think he’ll be ready; he’s so hungry, and I think we’ll do very well when he has his hands on the ball.”

When asked about how she thinks this year may go, Brenna revealed that she does have some faith for her senior year.

“I think we have a couple new players, so hopefully they’re good.”

To that, I say one thing: don’t count us out.

Matt ended his interview with one final sentiment.

“Getting over that mentality is a big thing.”

Both have given their two cents; now it’s up to you. Do you believe that this year’s varsity team has what it takes to beat the Marauders?

But this is our year. This year is different. Those losses and my doubt are in the past.