It was a typical Thursday morning as Mr. Tom English strutted down the freshmen hallway, sparkles glinting in the early morning light, bright colors blinding innocent freshmen eyes. Hawaiian flower earrings adorned his ears, patterned fabric framed his thin waist, and an assortment of plastic fruit balanced atop his head. Unbeknownst to the general public, […] 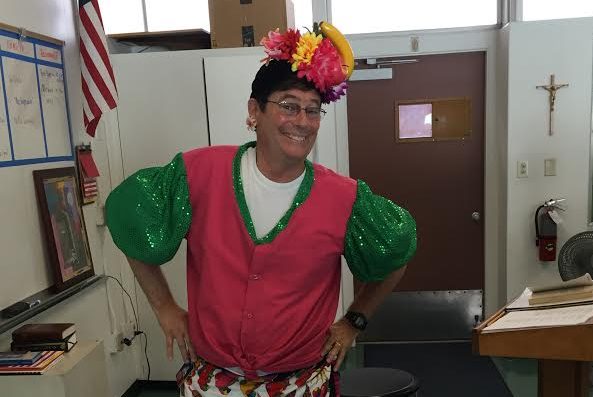 It was a typical Thursday morning as Mr. Tom English strutted down the freshmen hallway, sparkles glinting in the early morning light, bright colors blinding innocent freshmen eyes. Hawaiian flower earrings adorned his ears, patterned fabric framed his thin waist, and an assortment of plastic fruit balanced atop his head.

Unbeknownst to the general public, this world-famous model spends his spare time molding young minds with mountains of homework and stunning onlookers with his near-perfect hair. While he usually masquerades as an average Tom, on August 18th, 2016, Mr. English revealed his true identity as a runway model for only the third time in all of Christian Brothers history.

This once-in-a-lifetime opportunity to see him in action is fueled by the scores of the previous year’s AP World History Class. 34 brave souls embarked on a brutal journey to seal this assistant principal’s fate last spring. And by the grace of the fashion gods, all 34 passed. Even better, an unusually high percentage of kids received a score of five, which Mr. English calls “simply mind blowing,” considering the national pass rate is only 52%.

Many of the kids also took the AP European History test, even though they haven’t learned the material specifically geared towards the test. Mr. English claims that between 65-80% of his students tend to pass the test.

But what designer could possibly win the opportunity to dress Mr. Tom English? That would be his arch-nemesis, Ms. Marian Shackel, who is known for helping with past outfits. In previous years, the beloved CB history teacher has simply worn a dress, found by Ms. Shackel herself at Ross. Another year, he was the tooth fairy. This year, his class requested that he channel Carmen Miranda, a Brazilian samba singer and dancer. Mr. English bought the hat, but everything else, down to the clip-on flower earrings, was created by Ms. Shackel herself.

He originally stated that his favorite part of this year’s outfit was nothing, but he later revised the statement, relenting that “if wearing a ridiculous outfit is how to get my students to pass, I don’t mind wearing it.”

AP World History is a class available to sophomores that builds upon the world geography and culture learned freshman year and allows students to earn college credit. The subject is known to be difficult simply because of the amount of information students need to memorize and understand.

“You have to learn continually,” the history teacher says. “You can’t just know one field and be good at it.”

“I was definitely pleased with English’s outfit,” Emma Mathison (’18) told the Talon. Though she didn’t find the class particularly difficult, she didn’t mind getting some form of payback for the mountains of homework. “Mr. English is a wonderful teacher. I really would recommend the class.”

Unfortunately, we will be unable to see this world-famous model until next year.

If his class passes, of course.