You are here: Home \ Community \ Falcon Features \ Featured Posts \ The Evolution Of The Dress Code
Community
0

The Evolution Of The Dress Code

Halter tops, skirts, and even at one point free dress? CB has experienced a multitude of changes to its dress code over the past 25 years. 1991: CB beats Jesuit 3-0 in our annual Holy Bowl rivalry game, the Brothers still roamed the campus, and the first co-ed class was about to graduate. CB has […]

Halter tops, skirts, and even at one point free dress? CB has experienced a multitude of changes to its dress code over the past 25 years. 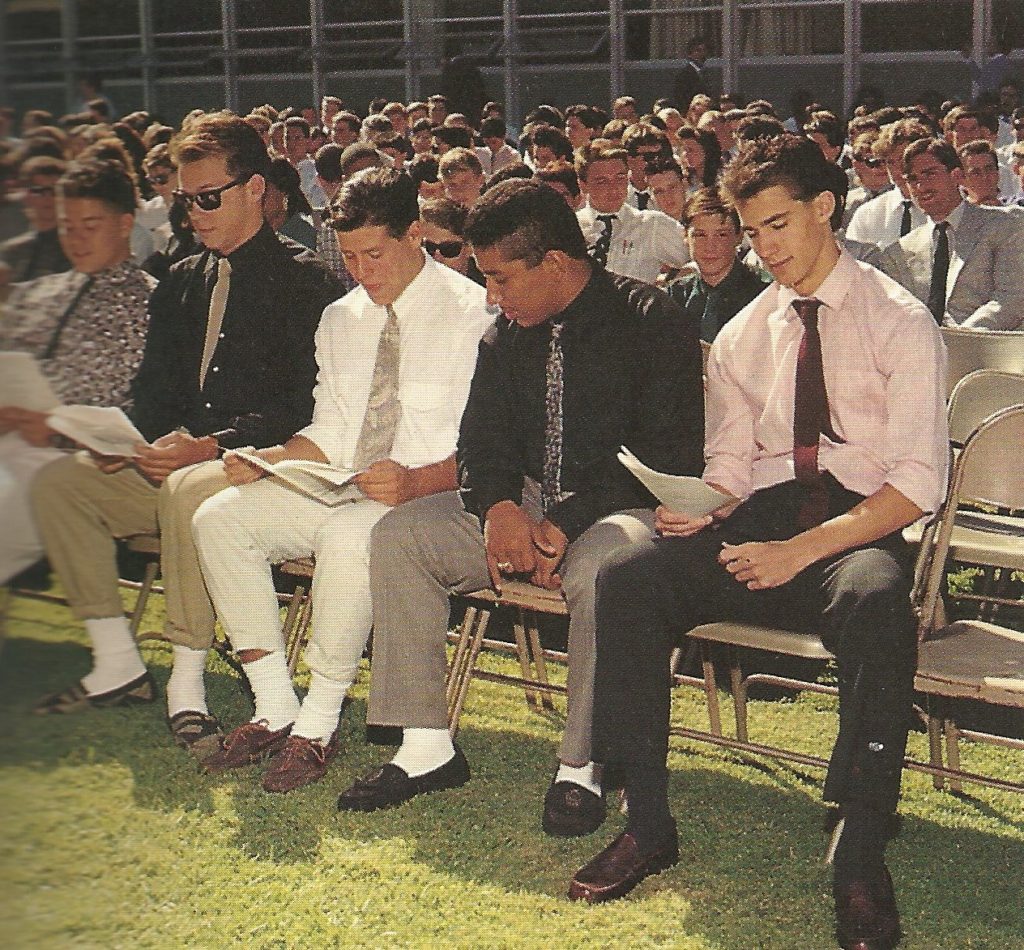 1991: CB beats Jesuit 3-0 in our annual Holy Bowl rivalry game, the Brothers still roamed the campus, and the first co-ed class was about to graduate.

CB has experienced a plethora of significant changes throughout the decades, from the addition of girls to the student body to the constant additions to campus. All the while, the CB dress code has evolved with the changes just as much to keep up with current trends or concerns.

With the addition of girls to the campus, a dress code had to be reinforced that was completely foreign to the staff and student body.

About ten years before CB combined with the all girls school Bishop Manogue High School, the dress code was very relaxed for the all male school. Alumni and Religious Studies teacher Mr. Paul Havey ’81 recalls being able to wear close to anything — as long as it was appropriate.

“There wasn’t much of a dress code [when I went to CB].” Mr. Havey recalled, “It had to be appropriate but we could wear P.E. shorts, sweats, t-shirts – it was pretty free.”

When Mr. Havey returned back to CB to take on a teaching position in 1996, the dress code had become slightly more strict and formal. When it came to the infamous liturgy dress, it was formal. No, not a CB polo and any old long pants — formal as in collared shirts that had to be tucked in and slacks.

“Collared shirts and button up shirts had to be tucked in.” Mr. Havey explained, “CB attire was required but they didn’t have the polo with the CB on them yet, so you could wear any polo.”

If you simply flip through a yearbook from the early ’90’s, it is evident that there wasn’t too much of a strict dress code but guys wore more formal attire than today. Students can be seen wearing any old button up shirt paired with a non CB jacket and occasionally a tie. And girls can be seen wearing skirts — yes, girls were allowed to wear skirts at one point in time.

But as relaxed as this may seem, the dress code was extremely strict. Shirts had to always be tucked in and the boys were required to wear khakis no matter the weather. Which is a reason why CB had what were called “hot weather days”.

These hot weather days were days in which school would get out at 2:00 pm if the weather permitted. The way to know if it was going to be a hot day or not was to read the newspaper before school and if the forecast called for the temperature to be 98 degrees or hotter, school would be let out early. 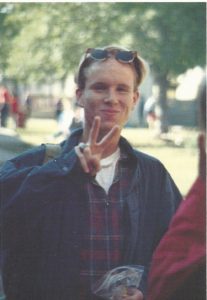 Hot weather days were a result of some of the buildings not having air conditioning and the student body dressed in clothes that, frankly, weren’t heat friendly.

Mr. Armando Diaz ’94 remembers these hot weather days in particular. He recalls when the weather wasn’t quite hot enough to be a hot weather day the students would be disappointed. But he is glad the dress code has been modified now to be more appropriate for heat.

“Kids would be falling over because they were in full on button shirts and khakis,” Mr. Diaz recalls.

Math Analysis teacher and Junior Varsity football coach Mr. Rolf Schumann remembers the dress code only vaguely from when he first starting teaching at CB back in 1990. But in the early 2000’s, he became part of the administration and remembers when they began making students wear strictly CB approved attire. The main reason for this was to be able to identify students very easily.

“Like right now, you can look around campus it’s real easy to spot [CB] kids versus not,” the math teacher clarified. ”A lot of [improvements in dress code] were geared towards that.”

But the sudden change in the liberal dress code wasn’t all because of the students. With the loose guidelines and never ending grey areas, the refined dress code was also meant to help teachers have more clear guidelines on what and was not allowed.

In fact, CB shirts and the common apparel that is sold in the Student Store today hadn’t been around until about 12 years ago.

“We tried to make it easier for teachers, because before it was like ‘What kind of Dockers are those?’ or ‘What kind of shirt is that?’” Mr. Schuman explains. “Now, you look at them and you go, ‘Oh, CB shirt.’”

Even with the seemingly more strict guidelines, students were still able to wear clothes that allowed them to express themselves. But the dress code has fluctuated over the years; a lot of the times it has been in reaction to the previous years’ issue with the dress code. Mr. Havey describes it as “fluctuating from semi-liberal to very conservative.”

Mr. Diaz has been a part of the Christian Brothers faculty for around 13 years and has not only seen the dress code changes run their course, but also experienced the dress code first hand.

He clearly remembers that the dress code wasn’t something to be challenged. In fact, he and a few other alumni CBHS faculty members would reminisce on their time here at CB and are baffled by what the student body is able to get away with now.  With all the modifications and flexible options for the dress code now, Mr. Diaz has noticed “no one now is in dress code.”

If you go back about 60 years and you can see that the dress code was extremely conservative. In the ‘60’s and ‘50’s, the student body was required to wear very formal shirts along with sweaters that had a  Christian Brothers seal on them.

Fast forward to the late ‘90’s and early 2000’s and it is clear that the dress code was extremely liberal in that girls were allowed to wear crop tops. Of course, this was eventually changed to a more conservative and professional. 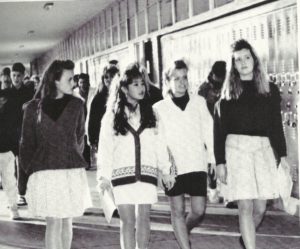 A group of girls stroll through the senior hallway.

Mr. Schumann explains that the reason for a more firm dress code is because it prepares the students for real life job situations.

“For most people interviewing for a job dress up, maybe not in a shirt and tie but a collared shirt and a pair of slacks is like given,” He begins. “Every now and then you get people who show up in a pair of gym shorts and a t-shirt and they have lost their interview before they even introduce themselves.”

Mr. Diaz can back up this claim as he recalls back when he started getting jobs he already knew how to dress appropriately.

“[The dress code] carried on when you started working again and you knew how to dress. I knew when it was time for me to work, how I should dress and I didn’t have a problem with it because I had to dress like that before.”

Mr. Schumann emphasized how important it is to know how to dress in a professional setting because it gives a strong first impression.

But some things never change. Jeans have never been in compliance with the dress code for as long as Mr. Schumann can remember. Even CB teachers have to follow a certain dress code, which do not include jeans. Mr. Schumann found that out for himself when he disastrously wore jeans to a staff meeting his first year at Christian Brothers.

“No jeans have been in effect forever. I even came in jeans to a meeting my first year of teaching here and a teacher took me aside and said ‘We don’t wear jeans,’” Mr. Schuman recalls. “Now that’s changed, but the Brother would’ve busted me for wearing jeans so I sat in the corner hoping he wouldn’t bust me.”

As unbearable as it can be, the dress code has been in place since as long as CB has been around for one main reason: professionalism.

“CB was a training institution for boys; they had to be presentable for the work force,” Mr. Diaz explains. “It was an extension of De La Salle, he was very much into how to socialize and educate you. Part of your socialization was dressing well and being clean shaven.

As an administrator at Christian Brothers and a stickler for dress code, Mr. Schumann describes his ideal dress code very minimally.

Simple and neat would be the ideal dress code for most, and would give students the freedom to wear more styles of clothes. But unfortunately if you give a mouse a cookie, he’s going to ask for a glass of milk.