What do you mean you still use words to text? CB students share their favorite emojis.  The tech savvy students at Christian Brothers are no strangers to the emoji world. Many use them in text messages, Tweets, Snapchats and even Instagram posts 💯. Some Falcons at CB even have their favorite emoji that encompasses their […]

What do you mean you still use words to text? CB students share their favorite emojis. 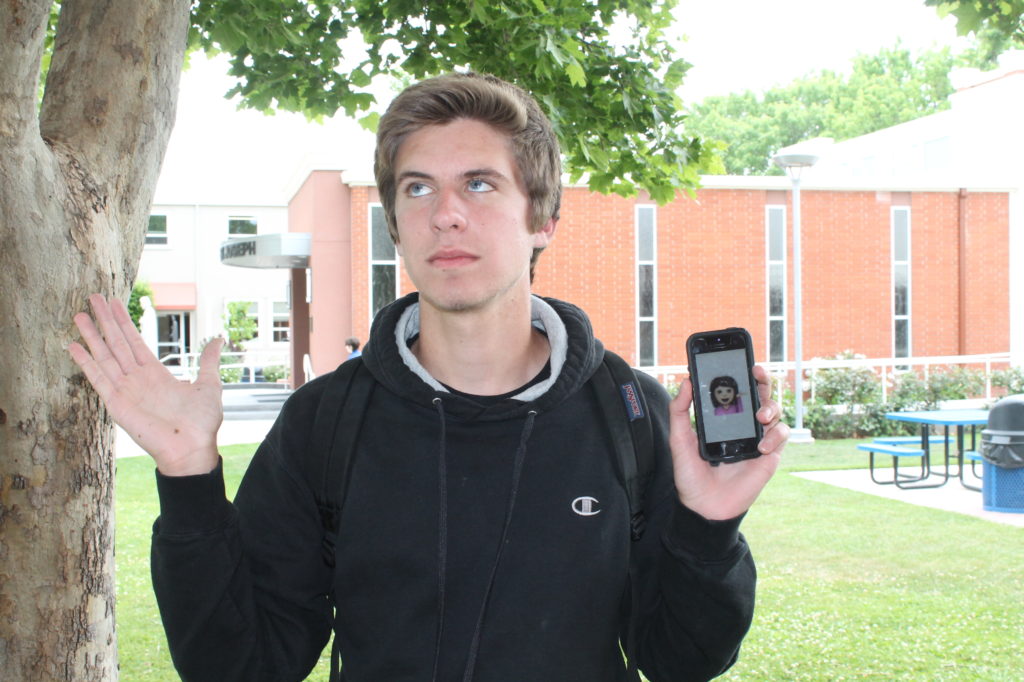 The tech savvy students at Christian Brothers are no strangers to the emoji world. Many use them in text messages, Tweets, Snapchats and even Instagram posts 💯. Some Falcons at CB even have their favorite emoji that encompasses their true personalities, using them in almost every text they send.

Allie Blake (’16) 😎 : This emoji perfectly describes the feeling you get when you ace that quiz you didn’t study for.

“I mostly use this emoji to reply to friends after we’ve made plans and decided on something to do” Allie explained. She also uses the emoticon as another way of saying she’s “down to hang with friends”.

Mackenzie Starnes (’16) 😂:  Are you laughing out loud or just trying to end the conversation? Mackenzie explains that she really does use this emoji when someone sends her something hilarious.

“When I don’t feel like typing ‘lol’ or ‘haha’ I’ll just hit this emoji a few times and send it along with another text,” she says.

She does mention the use of this guy who looks he’s been laughing so hard its brought him to tears to end a few awkward text conversations.

“Sometimes when I’m not sure how to respond to something funny or I don’t really want to talk anymore, I’ll just one 😂. That usually ends the conversation.”

Michael Sparks (’16) 😛: Sometimes there’s no perfect emoji to express how you’re feeling except this one. Michael explains the use of this somewhat odd emoticon.

“Its perfect to use in a group message when someone says something and no one else replies,” Michael says. “It doesn’t make the other person feel like no one is paying attention.”

He also mentions that when he sends the emoji, conversation usually starts up about how random the emoji itself is.

“So sometimes it can be used as interesting conversation starter,” he says.

Katie Enos (’16) 😅: This emoji captures the smiling face you put on while feeling the stress of all the homework that’s been put off that’s due next set. Katie explains that she uses this emoji to accompany her texts about senioritis and other stresses brought on by school.

“If I had to pick and emoji to capture senior year it’d probably be this one,” she says.

It really is perfect to use when texts fly back and forth to describe the smile that covers the stress we all feel at some time or another.

Katelyn Bates (’16) 😐: The look you gets when your parents try use words like “lit” and “turnt”. Embarrassed by parents trying to be cool? or realize you just did all that night before cramming for a test that has been canceled?

“I’ll send this emoji to my dad when he texts me one of his classic dad jokes that he thinks are hilarious.” Katelyn says . “It really is perfect to use when I text my friends about something that made me cringe or feel uncomfortable.”

“I’ll send it to accompany my sarcastic or snarky comments to make sure the message was received,” Joe says about his recent use of the hair flipping emoji.

Bella Bagatelos (’16) 👹: When you wake up on a Monday morning and look in the mirror. This strange looking emoji perfectly describes how Bella feels when she has to wake up early for school or sees that her reserved parking spot has been taken.

Bella explains that it perfectly captures her annoyance without getting in trouble for saying something too mean to her little brother.

“I’ll use this emoji mostly when I’m texting my little brother and he’s being annoying.”

Dani Toschi (’16) 😊: The face you make when you see all those big envelopes in the mail from all the colleges you’ve applied to. Dani uses this emoji to respond to thoughtful texts from friends and family.

“I’ll usually use it to accompany a response back to a nice text I receive or sweet comment someone leaves on an Instagram picture.”

These are just a few of the thousands of emojis that can capture pretty much any emotion that you may be feeling. The next time you can’t find the words to express your mood switch that keyboard over to the emojis and scroll away.