Meat may be neat, but CB vegans are here to greet you with a treat. Usually when the phrase “I’m a vegan”  is stated, there is some kind of negative connotation that is expressed. Why? It’s easy: People love meat. It is not easy being a vegetarian at CB, but to be a vegan is taking […]

Meat may be neat, but CB vegans are here to greet you with a treat. 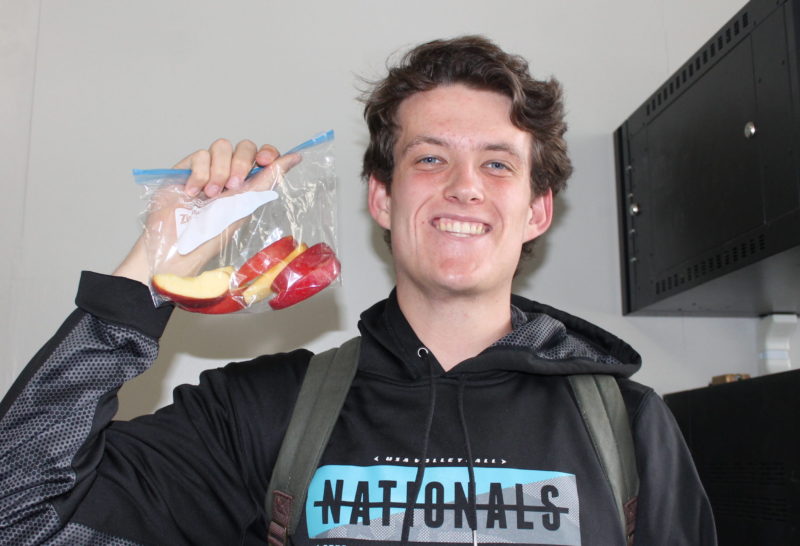 Usually when the phrase “I’m a vegan”  is stated, there is some kind of negative connotation that is expressed.

It is not easy being a vegetarian at CB, but to be a vegan is taking it to the next level.

To clear some misconceptions, to be a vegetarian is to not eat any kind of meat what so ever. You can get down to the nitty gritty sub-classes of vegetarians where you can eat fish or chicken, but for the most part, vegetarians do not eat meat.

Vegan do not eat anything animal or animal based. That means dairy and eggs are a no go.

“It takes a couple months to get used to it,” says ten month vegan Miyah Mata (’16).

She recalled that her transition from vegetarian to vegan was a mental obstacle as much a physical one.

“I felt uncomfortable for a few weeks,” she says. “After that I began to feel the benefits of eating clean food — a lot of fruits and a lot of grains.”

We are lucky to be living in a country where food is one grocery store away. Having the benefit to have all sorts of food ready to be devoured is an ability not everyone in the world has.

That being said, having all sorts of options means we shouldn’t be too harsh on those who want to eat differently from us.

When Miyah started her journey as a vegan, the first people she told were her parents.

“[My parents] thought it was just a phase, but after a few months in they were surprised how committed I was.”

Her friends and the people who knew her had a different view.

“People just made a lot of ignorant comments [about vegans].”

One big reason why people go vegan is because they do not support the idea of harming animals for food.

Bella Monteverde (’16) has been a vegetarian for five years, but eight months ago, she decided to take it up a notch.

“I just wanted to take the next step,” she told the Talon. “It was mostly for animal rights.”

She even went into detail how some makeup companies use animal products in them — trust me you do not want to Google it — and started to pay attention to what is really inside what she eats and uses.

Ignorance is a bliss, but there is no denying that when it comes to eating meat, there are some reasons to be concerned — enough to turn some people from meat lovers to bonafide vegans.

That is how star volleyball player Kyle Lutz (’16) became a vegan.

“I started to read up on the health issues that are associated with meat, dairy products and eggs. I decided to make the switch for health reasons.”

He stopped eating meat a couple months ago and made the change to be vegan recently. Just like Miyah, the first people to know were his parents,

“They were pretty surprised because of how much chicken I was eating every day,” he says.

So if they can’t eat meat or any animal based products…what do they eat?

“Honestly, it is not hard to find fresh produce for cheap,”  Bella says. “It is easy and fills you up faster than the fake stuff.”

The biggest change for Bella was meals that included eggs because it was a major part of her diet. But after a few days of researching, she found better and tastier recipes.

Miyah recalls that when she started to shop for vegan food, she noticed how drastic prices where for meat and for fruits.

The change wasn’t that bad for Kyle

“I just [used] different protein powder that isn’t milk based, paying closer attention to what I buy in stores.”

It is not easy to suddenly give up meat when you grow up eating whatever you want. For some people, meat is a part of their culture and to not eat it would cause total family destruction. But if you do want to become vegan, there are people out there just like you.

“Before you become vegan, try becoming vegetarian,” Bella says. “It is more practical than just trying to go [vegan overnight].”

If you are still on the edge, Kyle has some simple advice.

However, if you do love eating those $3.99 Big Macs, just know that Miyah wants you to pay attention to what you are eating.

“Even if you don’t support the vegan lifestyle, you should still educate yourself and realize that the stuff you are eating is unnatural.”