You are here: Home \ Community \ Featured Posts \ Are We Handi-Capable?
Community
0

Can CB really accommodate handicapped students? In middle school and for one summer, I enrolled in Jesuit summer school, and other than seeing all the hallways clogged with Marauders, I noticed one thing that caught my eye: a wheelchair-bound student. I didn’t know much about him other than the fact he had Cerebral Palsy, which […] 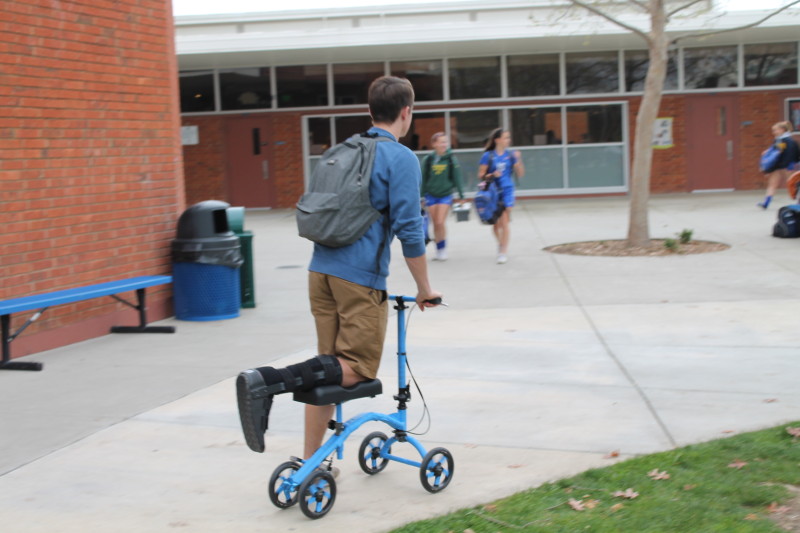 In middle school and for one summer, I enrolled in Jesuit summer school, and other than seeing all the hallways clogged with Marauders, I noticed one thing that caught my eye: a wheelchair-bound student.

I didn’t know much about him other than the fact he had Cerebral Palsy, which necessitated a wheelchair. As he navigated his way around Jesuit, I realized that there are a lot of accommodations for him like how there were ramps that lead to classrooms, friends strolling him around, and how much space he was given through the hallways.

Albeit this was during summer school, but it looked like Jesuit had done a fantastic job of being wheelchair-bound friendly. So…can CB accommodate wheel-bound individuals?

It is pretty rare to see strollers or wheelchair-bound students, but when it does happen, it piques my curiosity. I was given that chance when Seamus Hudnut (’16) strolled in my C Set with his one leg on a stroller.

“I have been on [the scooter] for three and a half weeks — at least three more [weeks] depending on how well it’s heal,” the healing soccer goalie told the Talon.

As he is mobility limited, a lot of changes happened in his schedule and for the first week of his new CB life, he found it very difficult to keep up.

Prior to his injury, Seamus rode to school on his fiery red Vespa, which brought life into the casual parking lot that was dominated by four wheelers. Due to how dangerous it is for him to be riding with a handicap, Seamus had to reschedule his morning routine to find a carpool to take him to and from school.

When he does arrive at school, the five minute passing period takes a whole new meaning. Getting from one place to another is a hassle.

While students do portray the five Lasallian Core Principles and move out of the way for Seamus, he says it is very difficult to get around because it is already crowded.

“They have people pushing them from behind so like they are trying to stop and let me go through, but at times they get pushed forward.”

Another thing he noticed when traversing around CB is how some classrooms around CB, notably those on the lower level, have little lips. He would struggle as he tries to guide himself and his scooter over the lips. 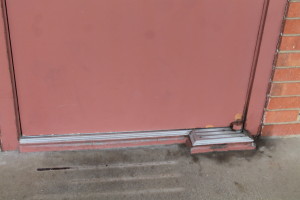 The stairs that are littered all around CB are no go for Seamus, so the only way for him to get up a floor is the one and only elevator found right under the STEM wing.

Despite being a transportation innovation for those who are carrying more than they can handle, Seamus found it inconvenient.

“It is very very very slow,” he claims. “I was in Midtown and the elevator I was on took the same amount of time to go seven floors that [our elevator] takes one floor.”

Over time, he got used to his new CB life and now rides on his taped up scooter with glee. However, Seamus is only on the scooter temporarily. What about a permanently wheelchair bound student?

“It would be very hard,” the senior says. “If you had a wheelchair, there is no way you can get into the classrooms [with the lips].”

Getting into classrooms is one problem — being in the classroom is another.

“Take the STEM wing — all the desks are with the chair attached, there would have to be a special desk for that person.”

He also noted that when he was in the hallways, there would be times in which the mosh of students would unknowingly jostle with his scooter and injury.

So, I had to ask: are we are capable of accommodating similar students in the future?

Mr. Barsanti was a math teacher in the 2000s at CB and as he has transitioned his job from teaching kids statistics to managing and improving the grounds of CB, he assured me that our campus has always been ADA compliant.

However, Mr. Barsanti went above and beyond as he told me how CB wants to make sure every student is included in CB.

Take the theater for example — in the backstage, all the controls for the lighting and props are elevated to where a student on a wheelchair can operate it.

The different height water fountains? Easy access for students on wheelchair to take a quick sip. Door knobs are getting replaced from the spheres to the lever knobs. Some rooms have ramps to accommodate for any wheel orientated transportation.

The lips that Seamus complained about? Mr. Barsanti is in the process of turning them into ramps as well.

However, unless CB creates another two story building, there will only be one elevator. There is a good reason for its location.

“[The people who built the elevator] believed that would be the best place for accessibility,” Mr. Barsanti said.

When Seamus’ injury finally heals, his stroller bound life would be a fragment of his time in CB. However, there will be even more students to walk/stroll through the halls of CB who will have all sorts of special needs that will need to be cared for.

This is no problem for CB. It has been wheelchair friendly ever since its establishment in 1876 and will continually improve to be the best school it can be for any kind of student and every kind of student.