You are here: Home \ Community \ Featured Posts \ The History Of The Falcon
Community
0

The History Of The Falcon

How did this majestic bird of prey become our school mascot? The Falcon. According to Webster’s Dictionary, they are defined as any several birds of prey of the family Falconidae, especially of the genus falco. With characteristic long, pointed wings and sharp, hooked beaks, they are capable of diving at high speeds to hunt down and […]

How did this majestic bird of prey become our school mascot? 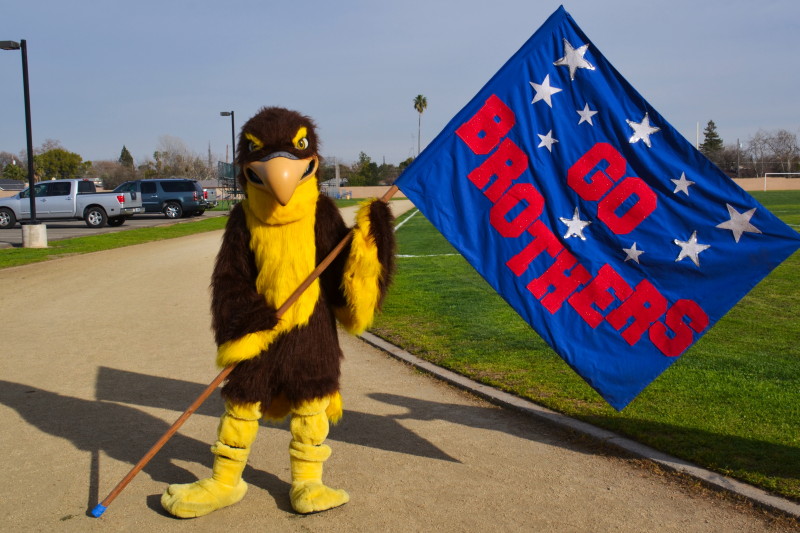 According to Webster’s Dictionary, they are defined as any several birds of prey of the family Falconidae, especially of the genus falco. With characteristic long, pointed wings and sharp, hooked beaks, they are capable of diving at high speeds to hunt down and attack prey such as small rodents, small birds, and marauding pirates.

However, why is this graceful, flying hunter our school mascot?

As far as freshman year, I identified the word Falcon with our Lassalian community. It is who we are as we bleed blue at Holy Bowl, Holy Court, Holy Hoops, or at any sporting event in general. It is the identity of our school as we come together at rallies and show our pride.

The word Falcon was always synonymous to Christian Brothers and its students. Yet, it was only until now, at senior year, when I realized I had no clue to how the Falcon came to be the image of Christian Brothers.

In fact, does anyone know why the Falcon is our mascot?

It might be embarrassing or perhaps even shameful to not know about one’s own origin story. However, I’m not alone in this endeavor. Fellow students I’ve talked to casually about this topic don’t knows how the Falcon came to become our a part of our school’s identity.

Of course, we’ve all been at this school for four years at most. It’s understandable that we don’t know the history of how our beloved falcon, out of numerous of animals within the animal kingdom, rested its wings in Oak Park to become our mascot.

Still, I wasn’t going to be satisfied with being blissfully ignorant to this important mystery. So, as any normal person would, I grabbed my bags, packed enough food for a week’s journey, mentally donned an Indiana Jones fedora and headed off into the world to get to the bottom of this mascot mystery.

And by this, I mean that I really just wandered aimlessly throughout the school until my luck would eventually (or hopefully) pay off.

My first stop was at the Admissions office, where I talked to Director of Admissions Mrs. Kristen McCarthy about our mascot. Luckily for me, she held a book that contained all of the history concerning about the history of the school.

Surprisingly, I learned much about our school and how the mascot for Christian Brothers has evolved over the years. In fact, according to Mrs. McCarthy, the first mascot of Christian Brothers, dating back to the early 1900’s, was the Red Sox.

Yes, we were once known as the Red Sox.

After around the 1910’s, the school changed the mascot from the Red Sox to the Gaels, due to donations of school and sports uniforms from St. Mary’s College of California. The school, separated into different schools at the time, remained the home of the Gaels until the 1950’s, at which point the school, known as Bishop Armstrong at the time, gained the title as Falcons.

“When the school opened [at this site] as Bishop Armstrong in 1957, juniors and seniors went here,” Mrs. McCarthy explained. “The freshmen and sophomores were still over on Broadway, which they were still the Gaels. But once they came here, they became Falcons.”

But while one trail ended, another began. Mrs. McCarthy was happy to point to more leads to who may know the mystery of the Falcon. In fact, the history book of Christian Brothers was written by a faculty member that has all the knowledge concerning about Christian Brothers’s past: Dr. Bill Iliff (’76).

My next stop led me to the STEM wing as I made a trek towards room 507. Here, Dr. Iliff was glad to tell me an even deeper history about our mascots.

“Back in [the ’70s], St. Francis and Manogue [High School] would try out for cheerleaders, so [Christian Brothers] would have female cheerleaders. And then at that point, one of the girls became the [first] Falcon mascot.” the science teacher informed me. He also told me when the school owned shirts depicting Freddy the Falcon, our school mascot, way back.

Yes, our beloved Falcon has a name.

And while I received a plethora of information regarding the roots to our mascot, the final question still remained: why did we choose the Falcon as our mascot?

“Once we moved to this campus, that’s when we became the Falcons, but there was really no reason such as some sort of connection to birds or something else.” Mr. Iliff said.

In the end, our school mascot was chosen by the luck of the draw. No big relation between Gaels and Falcons, or how the Falcon was supposed to symbolize something greater, or even if St. John Baptist de La Salle happened to have a pet falcon named Freddy. We became the Falcons because… why not?

I suppose it might be a little disappointing that there wasn’t a grand story to how the Falcon came to be our mascot. Yet, with over a century’s worth of history tied to this school, I was amazed at how our little school itself blossomed into the awesome community it is is along with how the Falcon fits us as a community.

I’m proud to be part of a community that spanned generations and stood the testament of time. And whether we see ourselves as the Red Sox, Gaels, or the might Falcons, there is one name we are proud to stand by: Lasallians.