Are CB students really as spirited as they say they are? When it comes to sports, nothing beats the tension in the air when one minuscule mistake can result in a win or demoralizing loss. Those heart pounding moments when the QB throws a Hail Mary, when the star soccer player cuts through the opposition […]

Are CB students really as spirited as they say they are? 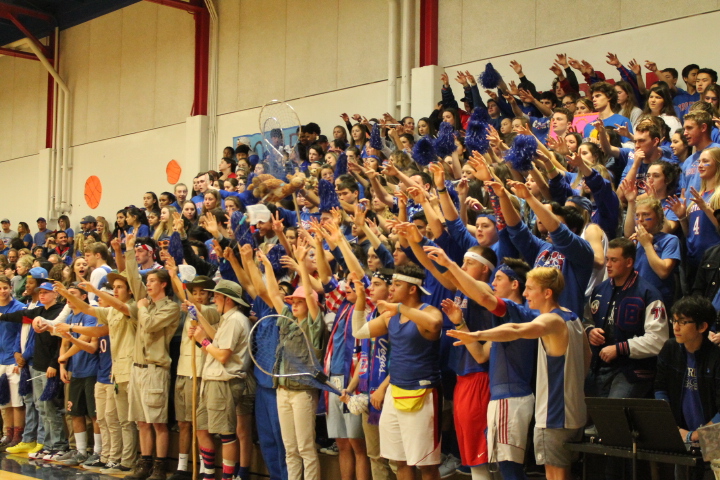 When it comes to sports, nothing beats the tension in the air when one minuscule mistake can result in a win or demoralizing loss.

Those heart pounding moments when the QB throws a Hail Mary, when the star soccer player cuts through the opposition to make one final play against the goalie or how a giant jump into the sky to smash a volleyball over a block.

These moments in a game get the audience up on their feet…well…that is if it isn’t at our gym.

A four year Football player and now entering his third year in Track and Field, David Iniguez (’16) complained that “[the students] claim to bleed blue and that they are true fans but [they] don’t come to the football games except Holy Bowl.”

Another athlete, basketball player Cameron Johnson (’16), also stated that “[CB Spirit] is great at big events like Holy Bowl but it needs to be better for regular games too.”

Complaints like that have been heard from athletes at all grade levels who believe that there is no spirit when it comes supporting our Falcons. We have Schoology posts hyping us up and posters getting us going, but when the time comes to cheer, the only people who go are the parents.

It is also painfully obvious that the parents themselves don’t even care about the sport, I mean come on, who brings their $300 laptop outside to a soccer game?!

The usual excuses come up when students are asked why they do not go: “I have too much homework,” “I have no time,” “I don’t even like the sport.”

I can say for sure that I do use those excuses, but after participating in a sport for more than three years, I can say it’s pretty sad to see only five students out there in the stands cheering.

Imagine if it was you who made that game winning goal, broke the record for the fastest mile, or even played for more than ten minutes in a game and the only person to see it was your Religion teacher, who is grading papers while clapping with one hand?

There are times when we have that ever bright sea of blue flooding the stands, but that’s only for major events. The small events need some love too. Even the moderator of the Falcon Force, Ms. Annie Hoekman is disappointed.

“I know students have a lot of work, I know they have other sports, drama and music but sometimes games should have more attendance,” she says.

She understands that she does not give enough support to the other sports and how she wishes she wants the Force to come to more games, but she feels disheartened that when she does advertises for a certain game, her call goes ignored.

“Seniors are graduating, Juniors have to worry about their academics while the Frosh and Sophomores cannot drive,” she says. “We have been discussing this for a long time — we just need to find a way to get students interested.”

However, the four time cheerleader, Maddie Gudmann (’16) says we don’t have a problem with our cheering.

“The games that are farther away on school days — I understand that people don’t want to go,” the cheerleader says. “But when it comes to the major events, we definitely have a lot of spirit to show.”

She looked on the positive side of cheering, saying how impressed she was whenever the students do come together and cheer. She also noted that when we cheer, we do it big.

“When we need to be spirited, CB definitely comes through like for the games that need to be,” she says.

It is very difficult to come to every game in our school, impossible even. However, coming to one home game — other than the holy events — renews energy to all the athletes that sees your shiny smiling face cheering to the high heavens.

The next time you hear about an upcoming game, just know we are waiting for that. Even if we can’t fill up that sea of blue, we are happy for the lake that forms.