SoCal: the part of California where people don’t say “hella”, the home to many celebrities, and most importantly, the location of the happiest place on Earth: the final Scholars trip. Day 1: The bus ride down I-5 was all fun and games until an hour in when my bus buddy Bella Bagatelos (’16) decided to […]

SoCal: the part of California where people don’t say “hella”, the home to many celebrities, and most importantly, the location of the happiest place on Earth: the final Scholars trip. 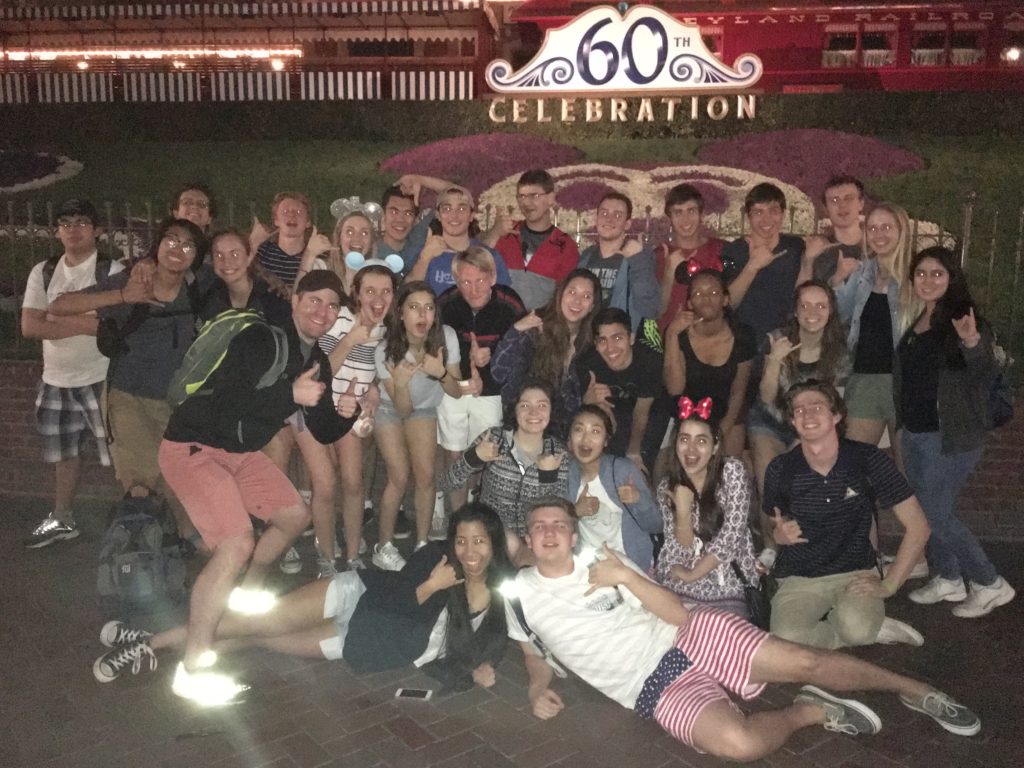 Day 1: The bus ride down I-5 was all fun and games until an hour in when my bus buddy Bella Bagatelos (’16) decided to get a bloody nose. Fortunately, Adam Wong (’16) had tissues and Steven Schneider (’16) offered edamame and apple slices to make up for the lost blood. I was there for moral support.

It was a team effort.

Post nose-bleed, nothing too exciting happened. The most engaging conversation the people in my proximity and I had so far was about the ACT. Scholarly, right?

It wasn’t until Scholars Coordinator Mr. Vince Leporini announced it was time for trivia when things started to get spicy. The competition was intense, especially since Star Wars stickers purchased by Ms. Chrys Cassetta were at stake. As we split up into teams, Bella and I managed to recruit Elmer Lizarde (’16) and Seamus Hudnut (’16) onto our squad. Our name and catch phrase, in honor of the lovely Ms. Cassetta, was “The Chyrs Casantheums – Straight Outta Eden.” We got bonus points for that.

Despite the extra points, our team didn’t win. Also, the questions were lame. One of the questions was, “What was the name of the whale that swallowed Pinocchio?” I didn’t even know that the whale had a name in the first place. Nonetheless, my team still had our pride, and that’s all that really matters.

A few hours later, we reached our destination for dinner. Michael Sparks III (’16) got a free burrito at Chipotle and I was really jealous of that. I had to pay for my burrito.

After everyone finished their meals, we gathered around the bus, awaiting the arrival of the bus driver. Meanwhile, I was riding around on Seamus’ scooter (He uses it for his broken ankle).  Mr. Tony Caselli (’97) tried parenting me by telling me that I was getting in the way of cars (I really wasn’t), and Lep made fun of me for having my sunglasses on at night. Obviously, they were both just jealous of my swag.

When we got back on the bus, Lep put on a movie. In the spirit of our trek to Disneyland, he decided to play Brother Bear. I forgot how tragic the beginning of that movie was. ***SPOILER ALERT*** Did Sitka really deserve to die?!

We arrived at the hotel around 8, leaving us two hours to do whatever we wanted within the confines of the rules. Basically, everyone went down to the pool. Colin Campbell (’16) and Chris Martin (’16) decided to read Jane Austen’s Pride and Prejudice in the hot tub. It was strange to say the least. 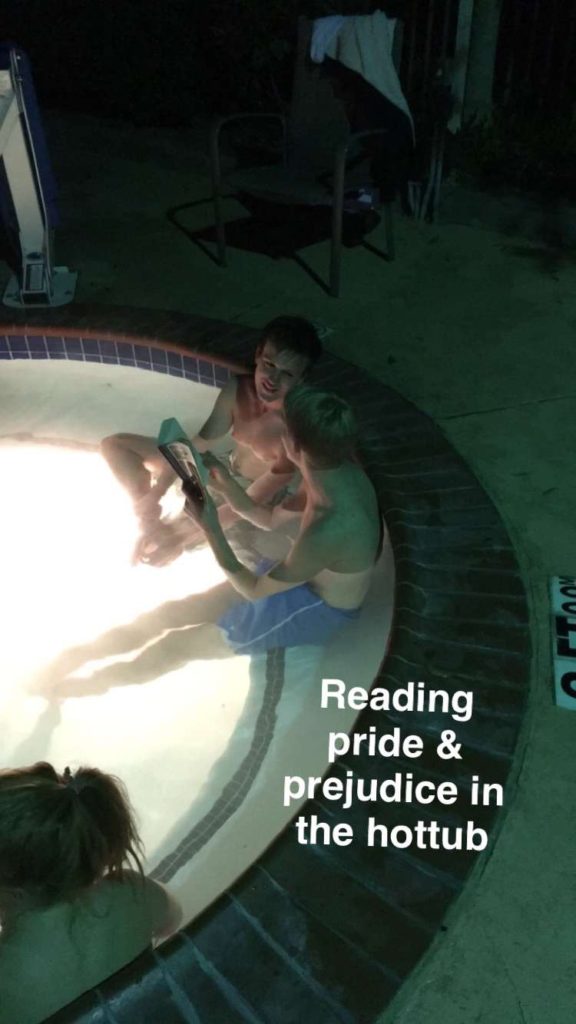 There are no words to describe this.

By the end of the night, Victoria Burbridge (’16), Audrey Nelson (’16), Bella, and I were in our room getting ready for bed. Meanwhile, Audrey turned on the TV and found Aladdin playing. While it was an excellent movie choice, it was also like a nice little preview to our upcoming day in Disneyland. #AmpedButSleepy

Day 2:  Today I woke up and had breakfast with Ms. Cassetta, Lep, and Bella. Lep tried talking to us about something that had to do with U.S History but he was talking too fast and I couldn’t keep up. I just nodded and laughed at appropriate moments to be polite.

By 9 AM, the entire crew was on the bus and ready to embark to the Getty Museum. As we were nearing our destination, the teachers gave us one warning: “Don’t be weird.”

Essentially, the Getty showcased a variety of art, from French tapestries and modern sculptures to paintings by Monet and Picasso. Everyone seemed to thoroughly enjoy the place. The only downside was that we spent a mere hour and a half there, so I felt really unsatisfied as we drove away.

Our next location was the Huntington Gardens, a 120 acre estate including a library, art exhibit, and an overwhelming amount of plants. To our luck, the Gardens were celebrating the Chinese New Year that day. Basically, they just sold some basic Chinese food, scattered red paper lanterns everywhere, and held short Chinese-themed performances.

One of the first things my friends and I decided to do was attend one of these performances. We agreed on the Martial Arts show. I would say that it was really cool and interesting, but I fell asleep. Not because it was boring, just because I was tired.

Freshly napped and rejuvenated, I was ready to explore the gardens!

But instead we ate some food at the cafe. Going inside, it reminded me a lot of a college cafeteria: lots of options, but not anything special. I decided to get pasta. I paid around ten dollars, and it wasn’t even that great of pasta. I recommend bringing your own food and having a picnic in the desert gardens or something cool like that.

Freshly napped, rejuvenated, and fed, I was even more ready to explore the gardens! First, we traversed to the Huntington Mausoleum. It was this big white marble monument, protected by a one foot high chain.

I really thought that you could walk inside it, so I nonchalantly hopped over the chain and climbed up two stairs of the mausoleum until all my friends told me to stop. All of my friends except Luke Harris (’16). He also hopped over the chain. We wanted someone to take our picture of us being rule breakers but nobody wanted to so we took a selfie instead. 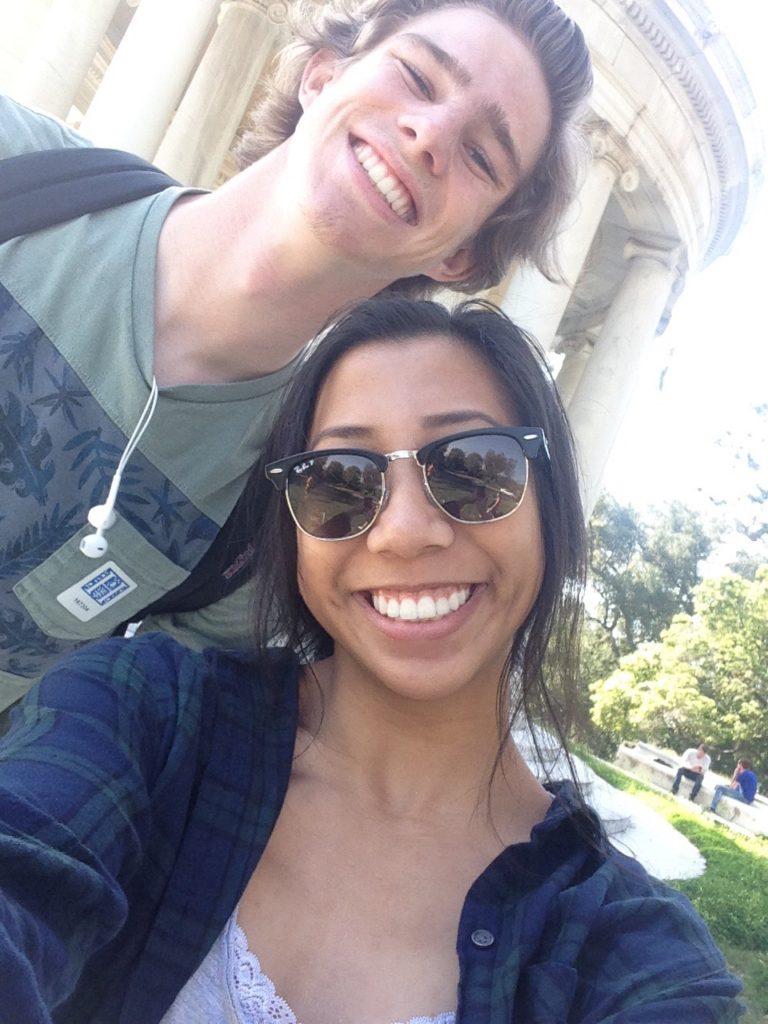 Rebel Scholars on the loose at the Huntington Gardens.

Afterwards, we walked around the rest of the gardens, admiring the variety of plants and sites we came across. At one point, we entered the subtropical garden, an indoors garden made to maintain a humid environment. That was when I decided I would never live somewhere where it would ever be humid — It’s just not for me.

By 3:30, the time Lep told us to meet up again, everyone was boarding the bus that would bring us to Anaheim, the home if Disneyland.

Victoria: I’ve never seen peanut butter on a bagel before.

*As Bella spreads peanut butter on her bagel*

Bella: Yeah, but this one has raisins in it so it’s sorta like peanut butter and jelly. 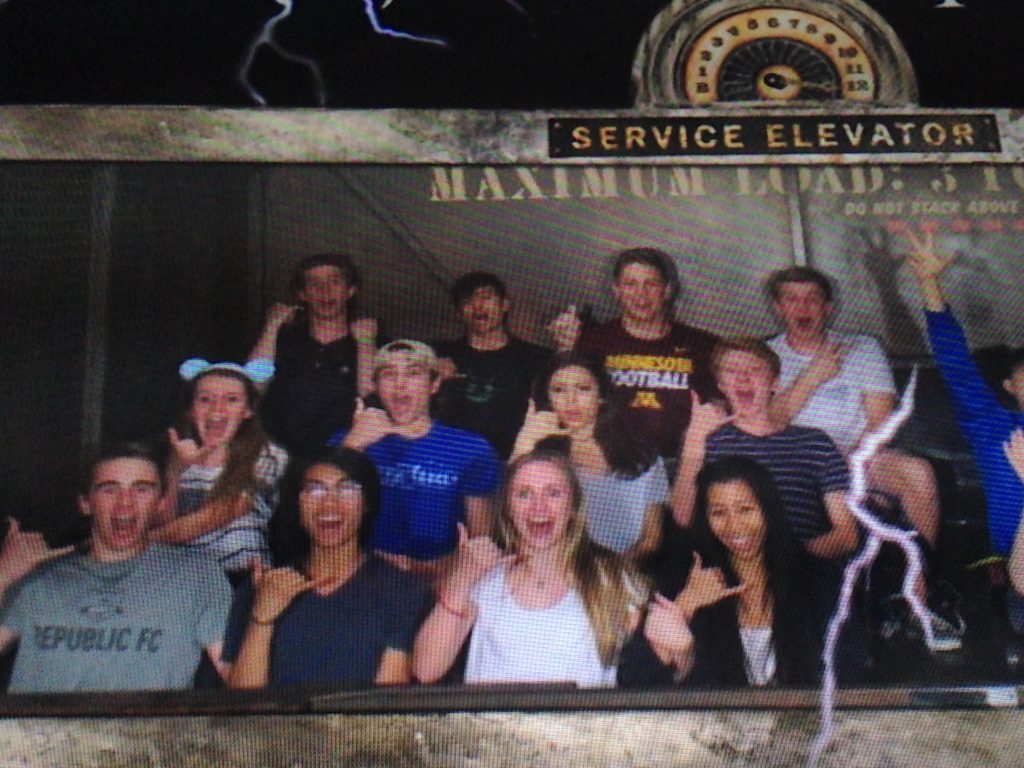 Hanging loose on the Tower of Terror. Sahh, dude.

BACK IN DISNEYLAND BECAUSE CALIFORNIA ADVENTURE CLOSED YEAHHHH!!!

Lep: LET’S GET FROSTIES AT WENDY’S

Day 4: Today was a sad day. It was the day we were going back to Sacramento and we had to wake up 30 minutes earlier than previous days. The Scholars So Cal Fest 2K16 was coming to a close.

Nonetheless, we made the most of our last eight hours together on the bus ride home. While the first couple of hours encompassed watching The Princess and the Frog, napping, and snacking, the last few were filled with adrenalized, vicious games of Mafia.

Despite the betrayal, aggressive accusations, and hurt feelings that stemmed from Mafia, everyone in the Scholars crew were still friends by the end of the bus ride. Hopefully, we’ll stay friends for a long time.

This trip was a special one. In fact, all of the trips we’ve taken throughout the past four years have been special. Disneyland was just a superb way of ending our journey together. Among the memories, laughter, and just straight-up nerdy conversations, the Scholars Program has truly been an excellent experience. These four days will never be forgotten. 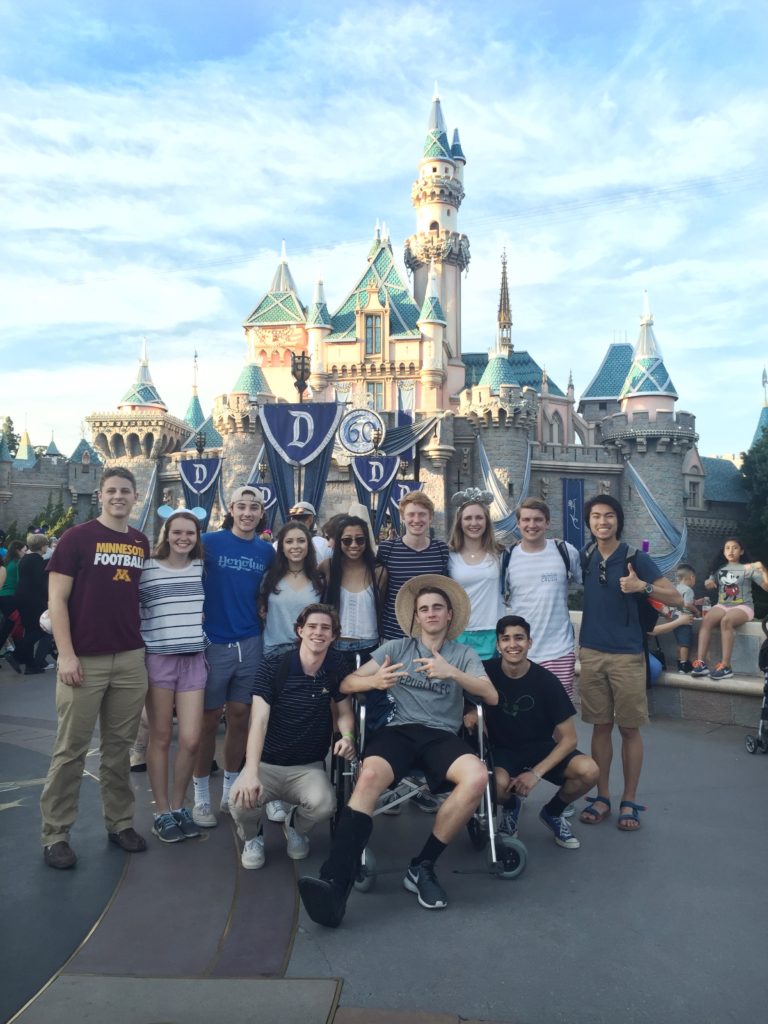 It’s been good, my friends.