Mr. Hood and senior Jake Fuhs are in a class of their own. The most dignified opinion comes from those who are both educated and intelligent. How can you tell if a person is educated? Well-read people are all educated, but that doesn’t make them all intelligent. Intelligent people are people who know facts and […]

Mr. Hood and senior Jake Fuhs are in a class of their own. 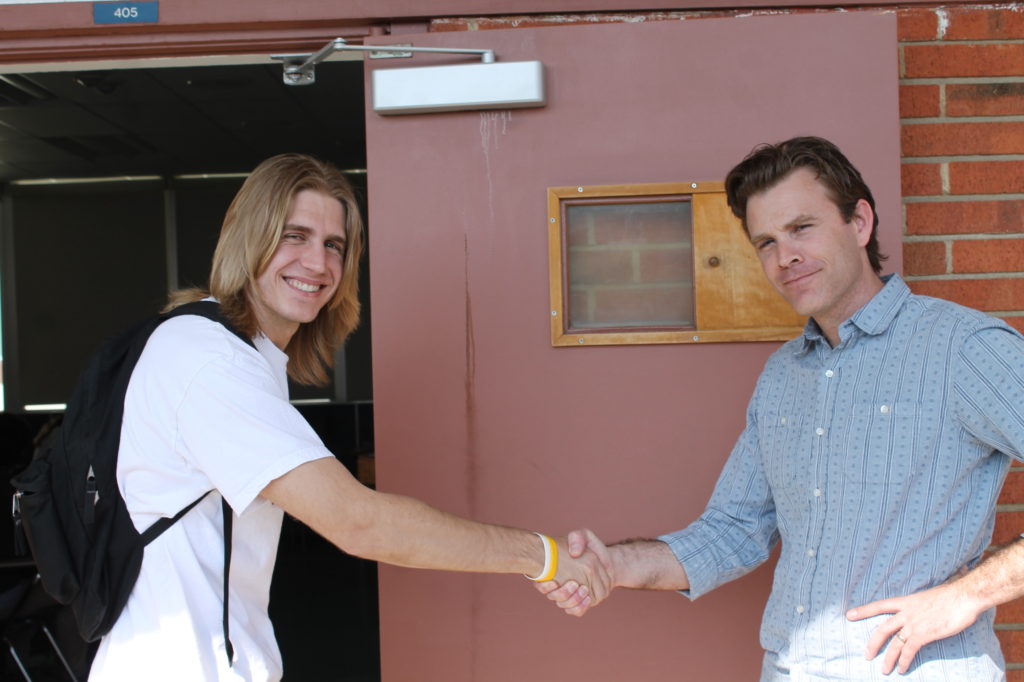 The most dignified opinion comes from those who are both educated and intelligent. How can you tell if a person is educated? Well-read people are all educated, but that doesn’t make them all intelligent. Intelligent people are people who know facts and data but add their own twist.

There are a couple of people at CB who stand out for their educational prowess — one of these people is Jake Fuhs (’16), who lives and grooves to his own rhythm. He doesn’t set out to be a role model, but simply is. A teacher that is very similar to Jake is AP U.S. History and Psychology instructor Mr. Michael Hood.

Mr. Hood is educated and intelligent, and so is Jake, but in separate ways.

Jake Fuhs is adorned with the hair of a lion — his gold surfer looks come straight out of the 1960’s. He definitely has an old soul.

Mr. Hood has the sophisticated style that pays homage to the 1970’s with suave hair and rugged wrangler look. His clothes are simple and thus bold. They put the “flow” back in motion.

When asked what he liked most about Hood’s Psychology class, Jake says “Mr. Hood is a cool guy and I liked learning about the influence of the media. It’s an eye opener.”

There is an infectious elective at Christian Brothers and it takes place in Room 405. Psychology delves deep into the minds of students and Mr. Hood inspires his students to go and research topics on their own.

Talking to them both Mr. Hood and Jake Fuhs, they almost seem like the same person. Laid back, easy going, breeze on the Pacific ocean type of communication.

Both of these men are heavy into mediation. Both are always willing to share about the benefits of spirituality. Fitting a nice 20-minute mantra into the work schedule seems to be doing wonders for these two gentlemen.

The Talon set out to find if these two men think alike. The original prediction was that these men would want to live in a simpler time in American History as opposed to the mass media of today’s age.

When asked about a moment in American history he would most like to be a part of, Mr. Hood thinks, becomes tranquil, and says World War II.

“You wanna say that you wanna be in like the Civil War because it’s exciting,” he said initially. “If I had to choose though, it would be World War II with the music and the styles. The Jazz, man — that’s when Jazz was big with Duke Ellington and guys like him. This is the time when jazz really hit the mainstream.”

Jake answered the time machine question with a different yet similar response — when asked what time he would like to be alive in, Jake says the 1960’s.

“The music and the culture is unbeatable,” Jake says. “That’s when one of my favorite bands The Grateful Dead was around!”

It’s interesting to ask someone what time they would like to travel back to, but sadly time machines don’t exist. So what’s the biggest perk about living in 2016? I asked Jake Fuhs and Mr. Hood the same question.

“The medicine and the anesthesia,” Mr. Hood says, “The access to medicine is just tremendous.”

The relaxed nature of Mr. Hood and Jake Fuhs is appealing to talk to. People at this school come and go but the legacy of Jake Fuhs and Mr. Hood will live on.