Your Christian Brothers men’s and women’s basketball teams look to close out this basketball season with two championship runs. Playoffs? We’re talking about playoffs?! That’s right, in the memorable words of Jim Mora Sr. it’s time for the postseason. Our Falcons boys and girls basketball teams have finished up the regular season and are gearing […]

Your Christian Brothers men’s and women’s basketball teams look to close out this basketball season with two championship runs. 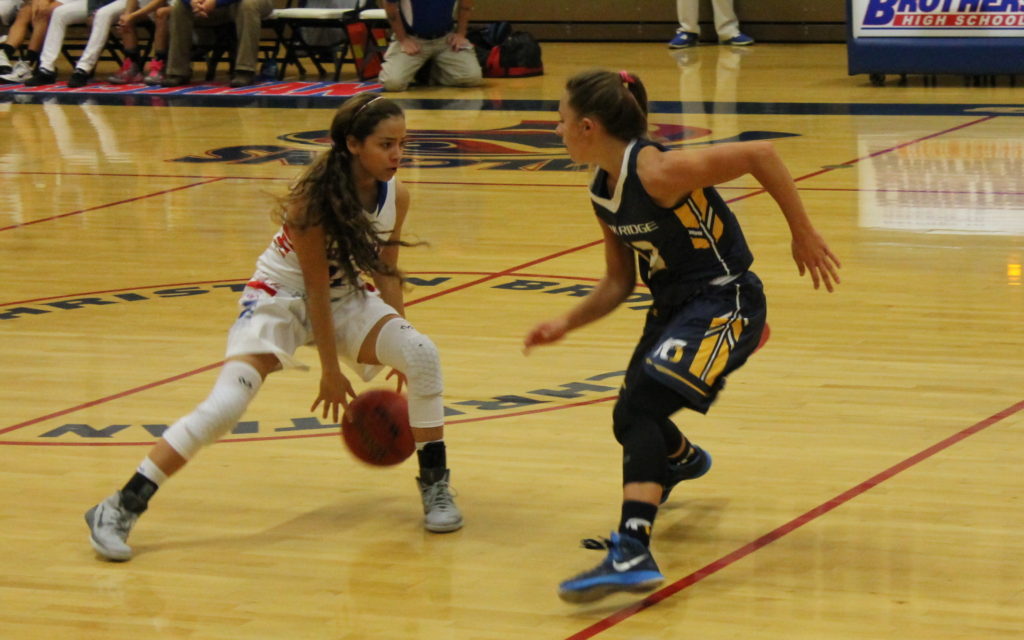 Playoffs? We’re talking about playoffs?! That’s right, in the memorable words of Jim Mora Sr. it’s time for the postseason. Our Falcons boys and girls basketball teams have finished up the regular season and are gearing up for the playoffs.

Our Lady Falcons ended the 2015-2016 regular season campaign with a CAL championship. The girls finished with an overall record of 21-6 and a dominating league record of 10-0. The Falcons’ season was highlighted by wins against St. Francis and a sweep of Vista Del Lago.

The team, led by Seniors Tina Ramirez (’16), Sammy Earley (’16), Giselle Cantiller (’16), and Priscilla Serrano (’16), will have to battle through the playoffs without leading scorer Kalani Mark (’17) who is out for the postseason with a knee injury.

However, the injury has not wavered the confidence of the Lady Falcons, who enter the playoffs as the number one seed. Their first game is Tuesday, February 23rd at home against Patterson High School.

Starting forward Sammy Earley is optimistic about her team’s chances of winning.

“Our team has really good chemistry on and off the court,” the senior says. “We all want each other to do good and we bring out the best in each other.”

The Falcons have spent the last week working hard at practice to create a game plan for Tuesday. Point guard Tina Ramirez says the focus of practice has been on team defense

“We know that Patterson can shoot the three ball,” she says. “If we play good defense, we should be able to shut them down and win.”

The Lady Falcons are no strangers to the big stage. Earley and Giselle Cantiller, who were a part of the 2013 Section Championship team, know what it takes and are looking forward to another championship run.

In addition to the girls first playoff game on Tuesday, the 11th seeded boys team begins their postseason on Wednesday on the road against Lincoln High School, who are the 6th seed for the SJS D-III playoffs.

The young Falcons have had one of the toughest schedules of the year and still managed to come out on top in many key games. Their 17-10 overall record and 7-3 League record has been highlighted by wins against St. Mary’s of Stockton at the Fr. Barry Tournament,  Vanden at the Fairfield Holiday Classic, and a winning on a buzzer beater on the road against league rival Rio Americano.

The Falcons season so far has been full of battling through tough games, so why stop now — that’s the attitude of Senior forward Jake Fuhs (’16).

“We have a young team but we are very hardworking and dedicated,” Fuhs states. “We have played a lot of tough games this year, so playoffs shouldn’t seem that different to us.”

As for a game plan against Lincoln, the Falcons know exactly what they need to do. Junior guard Matt Marengo (’17) says that sophomore center Elias King (’18) will play a big part in Wednesday’s game.

“Lincoln has a couple of shooters but they aren’t very big so we expect another big game from Elias,” Matt says.

The sophomore sensation has provided the Falcons with plenty of productivity on the offensive and defensive side of the ball this season. He and the team hope he can help propel the Falcons to a playoff win.

As basketball season comes to an end, our boys and girls teams are willing to do whatever it takes to bring a section championship banner back home.