You are here: Home \ Community \ Featured Posts \ May The Force Be With You?
Community
0

May The Force Be With You?

Star Wars: The Force Awakens may have exploded the Star Wars franchise back into popularity. But do CB Falcons have what it takes to use the Force? 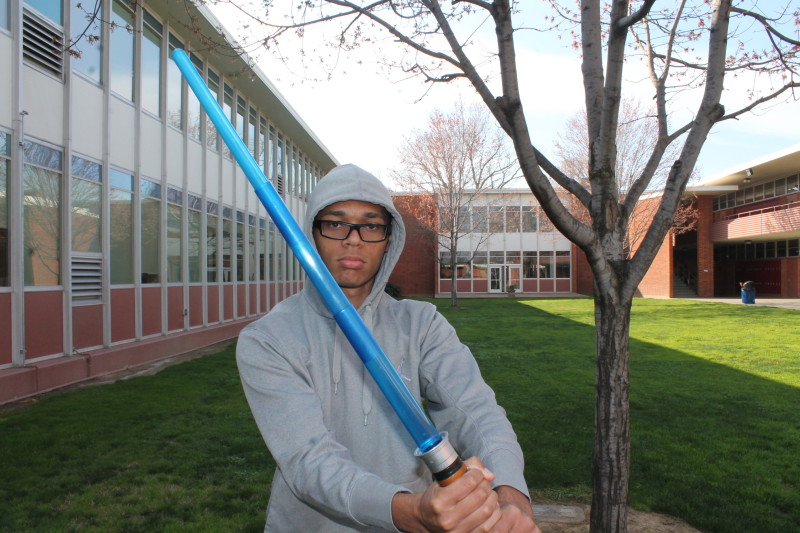 Lightsaber battles. Planet-destroying super weapons. Traitorous stormtroopers. These are a few phrases that can describe the newest movie, Star Wars: The Force Awakens, of the Star Wars Saga. The hype over the newest movie has rekindled the flame for love of everything and Star Wars, specially for many Falcons on campus, myself included.

But do students know what the Force is?

In the Star Wars universe, the Force may be the most perplexing thing to grasp. It’s there, but it’s not. It surrounds everything, yet is nothing at the same time. It is what grants Jedi the power to be heroes and Sith to be villains. Yet it’s a mystery to how it works.

So the question remains: How exactly do you describe the Force?

Like a wandering Jedi (or a lost freshman), I searched for those who can answer the question. Since there was at least a thousand Falcons on campus, I was bound to get a solid answer to what exactly the Force was.

Regina Chapuis (’18) did her best to explain this confusing concept.

“The Force is the power that runs throughout the universe, I guess,” she shrugged, “It’s that mystical, otherworldly… thing that is there, yet you can’t see it.”

Caroline McIntire (’18) also explained it with some uncertainty.

“The Force is this… energy that can be harnessed by people who believe in the Force,” she said skeptically. “I don’t really know how to explain it, but the force is kinda always…there.”

I asked Alex Poroli (’16) on what he had to offer on this mind-boggling concept. After a lot of thinking, along with deep reconsideration of his words, he finally gave his best answer:

“The Force is a force that flows through everything and some individuals can harness it and bend it to their will.”

When I asked Sam Macias (’16), an all-knowing fan of everything Star Wars, he just gave me a simple explanation to something so mysterious yet powerful.

“[The Force is] like an energy that surrounds us.” Sam simply stated. “Every person has it.”

Despite all of these reasonable answers, I felt that this wasn’t enough to answer the question. It appeared to me that the Force wasn’t as simple of a concept as I hoped it would be. There was a lot of uncertainty when I tried asking many people how it worked. Moreover, it seemed to be one of those “you just gotta know” or “just accept it and move on” type of things.

I just had to accept that the Force had to be left a mystery and continue on. However, that wasn’t enough for me, nor was I going to throw in the towel. Still persistent, I trudged on to find out more.

However, two teachers may have cracked the grand mystery to what the Force actually is. For Physics teacher Mr. Kevin Van Den Bogert, the Force might be beyond just “an energy that surrounds us”. In fact, it can possibly be involved through some of the deepest, strangest, and most complex parts of science: dark matter.

So we have this missing matter in the universe called dark matter,” he continued, “And it has to exist throughout the entire universe. And since it hasn’t been identified or detected directly, then it remains some sort of an enigma.”

This description about dark matter fits well with how the Force can be described: mysterious, perplexing, and undetectable through normal means.

“So the Force is not detectable directly. You have to use it indirectly through your thoughts and actions,” the science instructor claims. “Then you can harness that particular form of energy in the universe. Notably, the Star Wars universe.”

So cross out performing Jedi mind tricks to avoid your Spring Finals in the near future. Believe me, I tried. Way too many times.

Literature teacher and Star Wars enthusiast Mr. Tony Caselli (’97) approached the concept of the force through a more spiritual side.

“It’s this invisible connection, this invisible energy, that’s between all of us,” Mr. Caselli began,” that really does connect everybody to each other in a way that is meant to help us understand that we are part of something bigger. That we are all in this together, so to speak.

“Force-users are those among us in the Star Wars universe who are able to tap into it and show us how good things could be,” he added.

The Force does share many spiritual aspects to it. It does feel to be more alive and present throughout the universe it resides in. And since there are entire councils and orders that dedicate themselves to the ways of the Force, it can also be safe to say that the Force can be connected to something bigger.

Whether the Force is the result of dark matter, the spiritual life-energy of the universe, or is just… there, it is sadly as fictional as the galaxy far, far away. Yet, while it may be a power set in a Sci-Fi movie saga doesn’t mean we can’t enjoy it.