The Curious Case Of The Dress Code

Students are constantly frustrated with dress code. Is there a way around it and will there be any possible changes in the future? Christian Brothers is full of fashionable people, but some of that fashion does not fulfill the CB dress code requirement. The student handbook clearly states the do and do nots of what […]

Students are constantly frustrated with dress code. Is there a way around it and will there be any possible changes in the future? 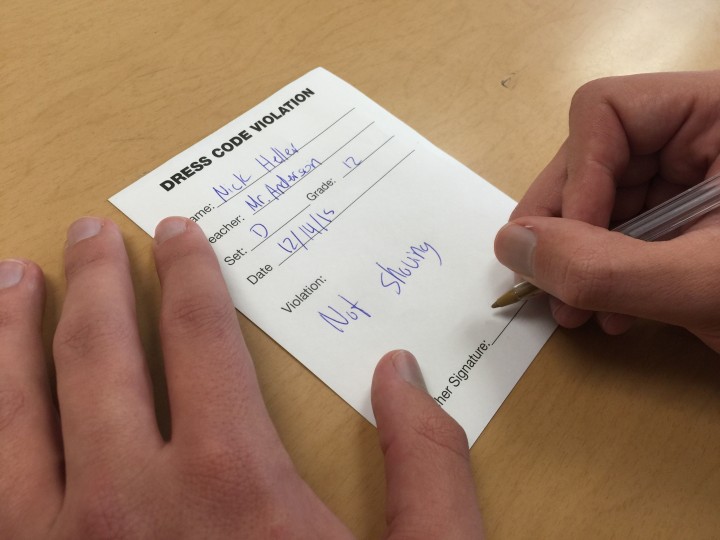 Christian Brothers is full of fashionable people, but some of that fashion does not fulfill the CB dress code requirement. The student handbook clearly states the do and do nots of what to wear, but some are very questionable in why they are not allowed. One dress code means you have lunch detention. Two violations is an after school detention, and a third violation means three days of after school detention and a parent notification.

“There are some dress codes that students are often critical about,” Co-Dean of Students Mrs. Cecilia Powers says. “If you have a CB or college sweatshirt underneath your jacket, you will be warm enough without that jacket.”

From a teachers perspective, taking off your jacket is just as easy as putting it on, but from a students perspective its the opposite. It is easier to just keep it on when getting inside the classroom.

“I think it is definitely one of the more foolish things in the dress code.,” Senior Kyle Lutz (’16) says. “CB Sweatshirts aren’t warm, just let us wear a jacket inside.”

Having a nice jacket over clothes certainly does enhance the warmth that is kept inside your body. With the cold weather that is approaching it is important for students to stay warm, inside and outside of the classrooms.

For some upperclassmen men who can grow them, beards can be quite the issue. Having to keep a clean shaven face is extremely difficult and frustrating because having to shave every other day can be a costly and timely effort. Shaving is an art form, it takes time and effort to get a nice clean shave without leaving any unforgettable marks. It must be properly taken care of through warm water, shaving cream, and possibly lotion to give your skin a nice smooth feel. 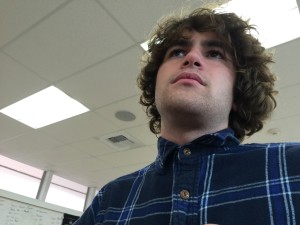 Senior Jonah Artru (’16) is out of dress code through his 5 o’clock shadow and flannel covering his CB wear.

“I think beards are fine, as long as it’s no Duck Dynasty kind of beard,” says freshman Haley Strack (’19)

If you have not seen the show Duck Dynasty, the beards they have on their face are outrageously long and crazy. This kind of facial hair is distracting and out of control. But what about a nice, kempt, beard?

“Men should have the choice to grow out their facial hair, after all we live in America. Brayden Pond (’16) states. “We should be able to express our individualism.”

“Often times teachers will come up to me and tell me that I need to, and the crazy thing is that I shaved the night before,” the senior states. “It’s a constant struggle.”

The constant pressure of teachers asking the bearded men to shave can be stressful and annoying.

“I feel like if I was able to shave at least once a week without a teacher bothering me about it, I wouldn’t feel that risk of getting the dress code for not shaving or forgetting to shave for that matter,” added Brayden.

This can be used as a reasonable and appropriate way to deal with the matter of a beard.

“Our dress code shows respect for who we are as well as others in our school community,” the Religion teacher states. “It puts all of us in the community on equal, fair ground, no matter our socioeconomic background.”

In today’s society it is difficult to follow this dress code set here at CB because people are constantly wanting to wear and show off the newest article of clothing they have received. Mr Guro says that we must look back at our Lasallian roots and understand what St. John Baptist De La Salle wanted for his students.

“He [St. John Baptist De La Salle] wanted to make sure no matter what background the students came from, rich or poor, that they were seen and treated as equals,” Mr. Guro finishes.

There are many reasons why Christian Bothers has a dress code. One example for a safety perspective. Having other people who don’t attend Christian Brothers on campus so it makes the students much more recognizable.

Often times we can fall victim to not following dress code through wearing those yoga pants or jacket we recently purchased, but it is important to know that here at CB we are here for not only a fun time, through our clubs and friendships that we have made, but also for an academic purpose.

“We want kids in clothing that is not distracting and allows them to focus in school,” Mrs. Powers says.

“I think students should follow dress code and stop being babies. The dress code is reasonable and this is a professional atmosphere,” Ms. Wanket says. “This is your job. If you go to work wearing sweatpants and little boy PJs — that’s a problem.”

Being a private school, Christian Brothers is held to a higher standard then most public schools. So when it comes to clothing you are automatically expected to be in appropriate dress out of respect for the school.

“At Sac High I wasn’t even allowed to let you in the door if you weren’t wearing pants or tucked in,” Ms. Wanket says. “You guys [the students] think you have really strict rules but you don’t. This is one of the chillest schools I have ever worked in for 25 years of teaching.

Once taking a deeper look into the student handbook, our dress code is very relaxed and simple. According to the hand book, students must wear official school-issued shirts, CB issued sweatshirts and jackets, long pants, walking shorts, and closed toed shoes. Although it might be easy to veer away from this code, it is just as easy to follow it.

The Talon then took a look at other schools handbooks such as, Jesuit, St. Francis, and Franklin in Elk Grove. Upon further research, Jesuit and St. Francis are on a strict dress code. For example St. Francis must wear skirts at all times and St. Francis shirt or sweatshirt. Jesuit is required to wear slacks, and a collared shirt while maintaining that shirt to be tucked in. Franklin holds a more relaxed dress code, much like CB, but Franklin students can wear clothing items like joggers, any kind of shirt that covers the shoulder and isn’t low cut or see through, and jeans.

Marcelino Oyono Nsuga (’16), arguably one of the most stylish seniors at CB, says that he does not like the dress code,

“It limits my choice when it comes to what I wear.”

Although the dress codes limits his style, Marcelino finds away around it.

Many major changes have taken place at CB over the years, such as becoming a co-ed school, new editions to the campus, and even the dress code. Will there be any plans for changes in the dress code for the future?

“I don’t see any dramatic changes happening,” states Mrs. Powers. “Occasionally there is discussion of heading towards wearing a uniform.”

She proceeded to talk about how there will always be critics on both sides of the spectrum, one side wanting it to be more strict, and the other more relaxed.

“In a typical week it is actually surprisingly low the number of kids who are actually written up for dress code. It’s usually between 10 and 20 students, which isn’t really that many..”

Haley says that she wants to wear open toed shoes like flip flops or Birkenstocks.

“They are some of the most comfortable shoes I own, and I strive to be as comfortable as I can throughout school,” the freshman says.

Marcelino Oyono Nsuga would like to wear hats when he wants because it continues to compliment his ongoing style.

“It can be any type of hat, CB hat or College hat, it flatters my style.”

Mrs. Powers and other teachers do give out dress codes, but she needs the help of all the teachers to add it to their daily routine. The Dean says that she does not want teachers painted as the “bad guy” for giving out violations.

Although students want to be more comfortable at school or look as stylish as possible, there will always be a chance to get dress coded by a teacher. The important thing to remember is that we represent Christian Brothers both inside and outside the campus.