Metal plates clank against each other as the bar raises high above the chest of CB’s Swollest students. Out of all the rooms at CB, the weight room has to be the most intimidating. Don’t believe me? Imagine this: You just come out of class, walking towards the snack bar near the Field House and […]

Metal plates clank against each other as the bar raises high above the chest of CB’s Swollest students. 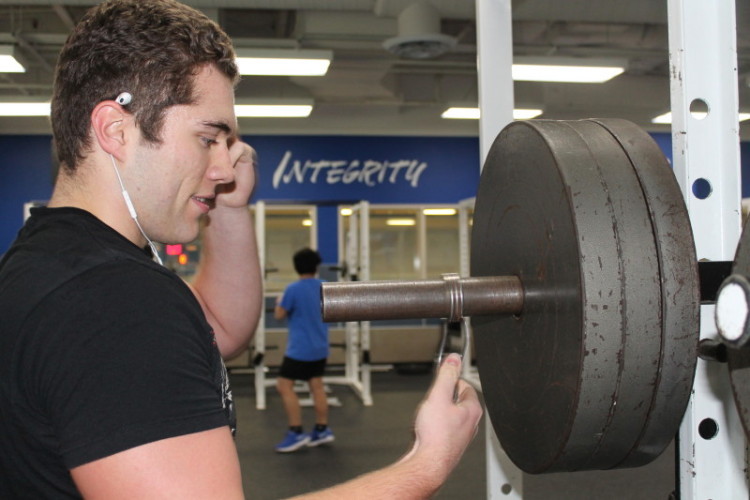 Out of all the rooms at CB, the weight room has to be the most intimidating. Don’t believe me? Imagine this: You just come out of class, walking towards the snack bar near the Field House and all you hear is thud over and over again.

That is the most intimidating scene any student will ever see at CB. But the question is: who is the student who holds the room down? Rather, who is the “swollest” student at CB?

“Me — I mean look at me, I’m huge,” Connor Capewell (’17) says when I came to ask him that very question. He believes without a doubt that he is “swollest” person — meaning, the most strong and muscular — at CB. His PB’s (personal best) backs it up with his dead lift and his back squat both clocking in at a staggering 405 lbs.

But if Connor had to choose someone else…

Jaret was not surprised when I came to him on topic of weight lifting, but he disagrees with what Connor said about him.

“I’m not ‘swoll’, but I am probably the strongest person in CB,” the wrestler says.

He is known for handling kittens with great care, but it is no lie that he is indeed a monster in the weight room with 380 for his back squat, 270 on his bench and a dead lift PB of 500 lbs. Those numbers just make him strong, but he believes there is another Brother here in CB that holds the title as “swollest” person in CB.

“He is just the buffest guy I know in campus. He is just a big muscular guy– that’s what ‘swoll’ means doesn’t it?”

“Basically, if you were to put getting ‘swoll’ into a sport,” he says.

Out of all workouts he does, he takes pride in his ability to do more than 100 pull ups, offering to even do them right on the spot where I interviewed him.

The funny thing is, Miggy believes that he isn’t the “swollest” person in CB. He even referred me to interview other people, Jaret and Connor being a part of that list.

It becomes a never ending circle to find the “swollest” person in CB. But, in my quest to find “Mr. Swoll” the bittersweet truth to all of it is the fact that they started out just like everyone else.

Connor did not start off by immediately back squatting 300 lbs right off the bat. He worked hard to get there.

“As long as you are making an attempt to get ‘swoll,’ you’ll be there,” he advises.

There was no conceivable way Jaret was able to dead lift 500 lbs three years ago. It took him time, lots of it.

“You need to keep going and keep grinding if you actually want to see something change in you,” the senior says.

Lastly, the best advice Miggy offers is not only to lift more, but to eat more.

“Eating is key, you need to be eating at least four meals a day if you trying to gain muscle.”

These Brothers do everything they can to become the better versions of themselves. They crunch out one more rep, one more set, one more plate to become the person they are proud of today.