Sprained ankle? Jammed fingers? Strained hamstring? The Christian Brothers Student Athletic Trainers have got you covered in terms of treating sport related injuries. The Christian Brothers Student Athletic Trainers get the opportunity to be introduced to the field of sports medicine in a program that teaches them the basics of diagnosing and treating injuries that […] 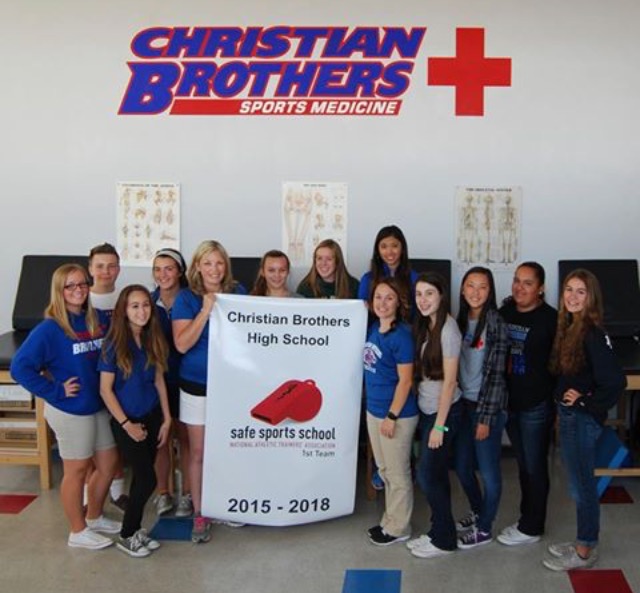 The Fall 2015 Student Athletic Trainers gather around a poster certifying that Christian Brothers is a sports safe school.

The Christian Brothers Student Athletic Trainers get the opportunity to be introduced to the field of sports medicine in a program that teaches them the basics of diagnosing and treating injuries that result from athletics.

Maria Pearson (’16) is a new trainer for the winter sports season and has been involved for only a little over a month. Her decision to become a trainer was made after she suffered one too many concussions and was banned from playing sports.

“I had been visited training room pretty regularly because I had been injured a lot during the lacrosse season, so I kind of knew what the trainers did,” she says.

Despite her experience with the program from the athlete side, Maria was surprised to learn just how unique the program is from the insider’s perspective.

“I knew I would be learning how to take care of athletes and learning the basics, but I think that my expectations and preconceptions were exceeded just because everybody in here is so friendly and welcoming,” Maria remembered. “I just showed up and was like ‘hey, I’m the new trainer’. I was worried going into it, but I didn’t have to be worried for long.”

For Maria, the best part about the training program is the group of people that she gets to work with.

“They’re all great people and it’s a really fun way to spend my time after school every day.”

The student athletic trainers work extremely hard to help athletes get through their injuries, but the real work begins when the athletes are at practice and the trainers practice new skills. Despite the work load, Maria enjoys this time to learn new things, as well as hang out with her fellow trainers.

“Every day after the athletes stop coming in because sport practices have started we all share food and joke around,” she explains. “It’s a great way to unwind after the long school day, while I’m still learning new skills that I would otherwise not have an opportunity to learn.”

“Overall I really enjoy working here,” Maria said with a smile. “It’s a ton of fun and I wish I could be a trainer for longer than one season.”

Maci Meyer (’16) is another trainer for the program, but with a little more experience with two years under her belt.

Connections to people who were already involved in the program coupled with an interest in pursuing a career in medicine made it an easy decision for Maci to apply to the program.

“I figured that by joining this program I would be able to get a taste of what a career path of this type would be like,” she said. “It’s a way to dip my toes in the pool of medicine to test if it’s something that I want to do in the future as a job option.”

Even though she thoroughly enjoys the program now, Maci remembers feeling very nervous going into the training room on her first day.

“You have to know how to interact with people in a professional manner as a trainer, talking to the athletes that you are training.”

“It was also nerve wracking because I was kind of young coming into the program in a group of primarily older people who were seniors,” the senior added.

After two years as a student athletic trainer and many hours of experience later, Maci enjoys treating athletes after school every day, and on most weekends at the various sporting events she works. 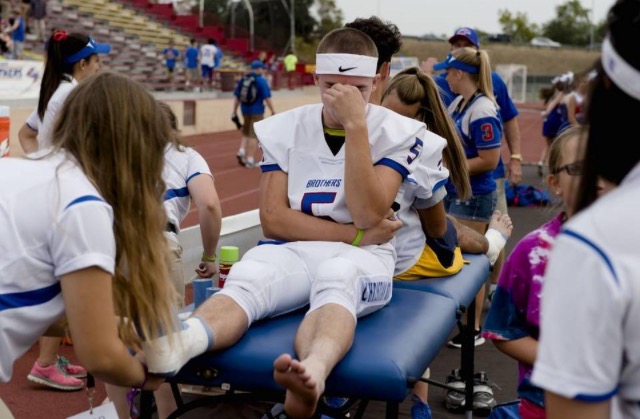 David Simmons (’17) gets his ankle taped during a football game by trainer Maci Meyer (’16).

“Athletic training is seriously my favorite thing ever because you come in here and we’re all close friends, and it’s honestly like one big hang out after school,” Maci said cheerfully. “You get to learn things that you would not normally be exposed to and it’s a really unique program that a lot of other schools do not have access to.”

“The all around environment and feeling you get when you walk into the training room is so positive and welcoming and I’m so happy to be a part of it all.”

Despite how great the program is from this insider’s perspective, both Maria and Maci lament that not a lot of people know about it.

“I think a big reason as to why people don’t know about it is because people don’t talk about the application process,” Maria explained. “If the deadlines were more advertised then I think there would be a lot more people applying to the program.”

Along with not being well recognized, there is a big misconception that the Student Athletic Trainers have to deal with.

“People seem to think that only girls can apply to be trainers, but that is definitely not the case,” Maria remarks.

Right now there is only one male working in the training room, freshman Emeril Cedros (’19).

Maci also points out that the Student Athletic Training program is not a very well known or widely recognized opportunity that the Christian Brothers campus offers.

“Part of the reason that we’re not well known is because we’re not on the tour at Open House!” Maci explains emphatically. “For me personally, when I chose to come to CB I didn’t even know anything about this program or that it even existed. There definitely needs to be some more work done in order to promote the training program.

“The most obvious and simple solution would be to add the training room to the tour at open house to promote the program to the prospective students,” she suggested.

It really is a wonder why this incredible program does not get more recognition, especially since Christian Brothers boasts two certified trainers available to help athletes and teach the trainers new skills.

In the fall of 2002, Ms. Darci Calista (Ms. Stark at the time) came to work at CB and consequently started the Student Athletic Training Program.

From the start of her time at CB, the program was open to any student who wished to come and learn. But the opportunities open to the students started out more limited than they are now.

“In the beginning the students didn’t do any treatments or taping of the athletes,” Ms. Calista explained. “Over the years the students have asked to learn more so they can do more hands-on work in treating sports injuries.”

What started off as helping fetch water at football games has grown to a sign off sheet of skills including taping and wrapping techniques that the trainers can learn. Once the trainer gets the skill signed off, they are free to treat any athlete that comes in with that ailment and help them get up and running again.

Through the program, Ms. Calista has been able to translate her love of medicine to a program dedicated to teaching any student willing to work hard and learn the skills required of sports medicine.

Although she started out wanting to be a doctor, Ms. Calista found her true calling in the world of sports medicine.

“I was interested in becoming a doctor, but didn’t want to go to school for that long,” she says. “Turns out being an athletic trainer was a great fit for me because I get to work in two areas that I love, medicine and sports!”

Looking towards the future, Ms. Calista hopes to develop the program even further in order to accept more students and grow the educational component of athletic training.

With the addition of another certified athletic trainer, Ms. Kolby Kuhn to the staff, this vision is sure to become reality within the next few years.

“I would love to expand the program, especially because I’ve had a lot of former students tell me that what they learned in my program gave them a head start in their college program.”

One such former student, Ms. Stephanie Gabrielli ’07 started as a sophomore and has never lost her love for the medical field since.

“There were only six of us in the beginning,” Ms. Gabrielli reminisced. “We started out going to the athletic training room occasionally after school to help with water at football games.”

“The following year, Ms. Calista began teaching us more about different common injuries, injuring prevention, rehabilitation, and taping styles for various injuries. We slowly began helping with these things more and more after school and at sporting events.”

Currently a Diagnostic Medical Sonographer for Sutter Health, Ms. Gabrielli remarks that “without Ms. Calista, I wouldn’t be where I am today.”

“Being a student athletic trainer was an amazing experience. I had the opportunity to start leaning about a profession I was interested in very early on and this had a huge impact on my career.”

Ms. Gabrielli first became interested in the program her freshman year as a frequently injured athlete.

“It was alway very frustrating being constantly injured and having to go in to get fixed up,” she recalled.

Lucky for Ms. Gabrielli, Ms. Calista always made her time worthwhile by explaining more about what an athletic trainer did and she quickly became hooked on the subject.

Ms. Gabrielli, and a multitude of other CB graduate trainers have been able to use what they learned and pursue careers in different medical related fields, all thanks to Ms. Calista’s program.

“Ms. Calista has worked incredibly hard to get the Student Athletic Training Program noticed from the very beginning,” the CB alum says. “For me, being in the athletic training room after school and traveling to different sporting events was always so much fun, even though we all had to work hard and learn a lot.”

Hopefully in the next few years the program will have more applicants for this underrated opportunity offered at CB.

So next time you’re going to a sporting event to watch or participate in, remember the Student Athletic Trainers and all they do to make the event possible.