Vegetarians get a lot of flack for their bland and boring diets. But how much of that is really in their control? There are times when being a vegetarian can feel excruciatingly difficult — lunchtime at CB is one of those times. It’s hard to maintain a vegetarian lifestyle when your main choices at the […]

Vegetarians get a lot of flack for their bland and boring diets. But how much of that is really in their control? 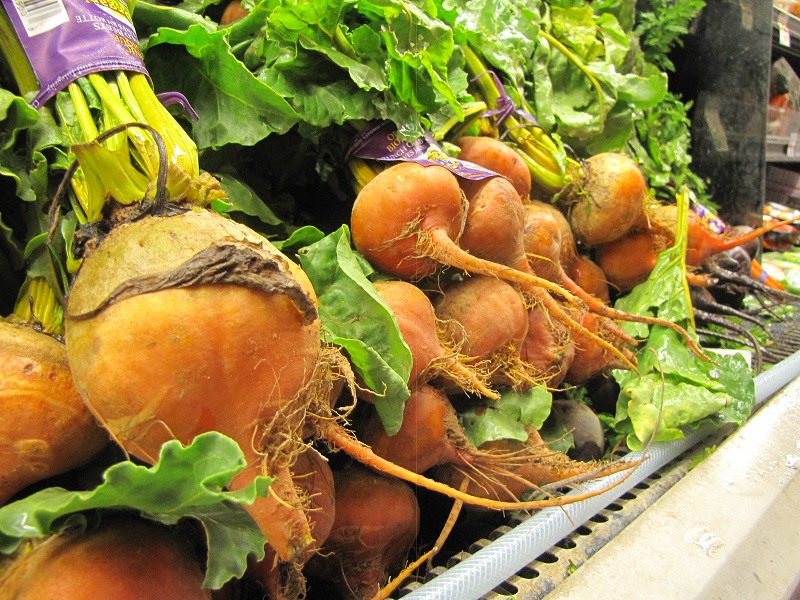 There are times when being a vegetarian can feel excruciatingly difficult — lunchtime at CB is one of those times. It’s hard to maintain a vegetarian lifestyle when your main choices at the cafeteria are grilled cheese and a Caesar salad that you had to pick the chicken out of on your own. Sometimes you can switch it up with a PB&J and a pudding cup, maybe even a fruit cup or a slice of cheese pizza here and there. But is that really variety?

No. It’s not. Especially when you compare the meager selection of vegetarian dishes with the vast abundance of meat based dishes. Even dishes that could theoretically be vegetarian — fettucine alfredo, I’m looking at you — often have the meat already mixed in and difficult to pick out from the rest of the meal.

“There’s really not a lot of options for vegetarians,” explains cafeteria regular and meat-lover Adriana Alvarado (’16). Although Adriana is not a vegetarian herself, she frequents the cafeteria more regularly than anyone I know and has also noticed that vegetarian options at the cafeteria are scarce.

“Usually the main meal is meat based, like meat loaf and mashed potatoes or some type of chicken. The only time where it’s vegetarian, I would say is when it’s pasta. Sometimes they have pasta without anything, it’s just pasta [and sauce], like mac and cheese, but sometimes they even have pasta with chicken already on it,” Adriana explains.

“Oh, and there’s nachos too, because you can get nachos without the meat too,” she adds.

Clearly, there isn’t a great amount of variety of healthy vegetarian foods in the CB cafeteria.

“I think I go to the cafeteria maybe once a month for either a cookie or Naked Juice, but never anything else. I don’t really frequent the cafeteria because the food is usually cooked with meat,” explains Marci Bandala (’16), who recently made the switch from meat-eater to vegetarian after having a vegetarian meal at Garden to Grill and finding that “vegetarian food doesn’t [only] taste like tree bark and dirt.”

One thing’s for sure: as long as I am a vegetarian, I will never get to eat the Sodexo special. Every day at lunch I grow envious as I watch my friends eat these elegant plates of orange chicken or beef stroganoff or whatever other special Sodexo’s cooking up that day. Just the other day I saw my friend walk out of the cafeteria with a plate of turkey and mashed potatoes. What about beans and rice? Minestrone soup perhaps? Fettucine alfredo that doesn’t come with the chicken already mixed in?

Will Warner (’18), does not eat at the cafeteria very often but has a lot of friends who do.

“Sometimes they have pasta, but I think that’s the only vegetarian thing they have,” Will says, who like Adriana, is not a vegetarian but notices that vegetarians and vegans have some pretty limited options when it comes to eating at the CB cafeteria.

“I notice that they always have a garden burger,” adds Daniel McCarthy (’16). “My favorite thing in the cafeteria is the blue Gatorade.”

I guess that’s vegetarian too.

Even the meat-eaters can tell that the cafeteria doesn’t exactly have the most varied of options for their herbivorous brethren.

“I personally have never seen a vegetarian special. It is almost always some sort of meat,” Daniel shares.

“It’s really limited. There’s only snacks ― my favorite is the cheese and grapes, so I get that, but [in terms of] meals, they don’t really have anything,” says Stephanie Jimenez (’16), a yearlong vegetarian. “They have salads, which is good, but there’s not a lot of stuff [in them].”

“There’s other food there, like the carrots and celery sticks, but like Stephanie said, they’re not main meals, they’re snacks. So that’s like the only healthy vegetarian food there,” Adriana expands. I mean, blue Gatorade is marketed as healthy.

“And healthy food is a lot more expensive,” she adds.

By now you’re probably thinking, “Come on, there’s got to be some vegetarian food there!”

There is. But there’s certainly not enough for us vegetarians to maintain a healthy and varied diet at the CB Cafeteria. Salads, grilled cheese, PB&J — where’s the variety? The protein combinations? The seasoning?

We’re not asking for Michael Pollan (as the author of books like Cooked and The Omnivore’s Dilemma, he is perhaps the most prominent advocate of a vegetarian lifestyle of our generation) to come in and show Sodexo how it’s done. We just want some good vegetarian options for the days when we don’t feel like putting together a homemade lunch.

There are lots of reasons why people are vegetarian — some do it for health, some do it for animal rights, some for environmental reasons, etc. Marci decided to become a vegetarian for good after her mother told her that she’d “give it up the second [she] smelled bacon.” Stephanie Jimenez (’16) made the switch just because she was up for a challenge. I did it just for the heck of it. 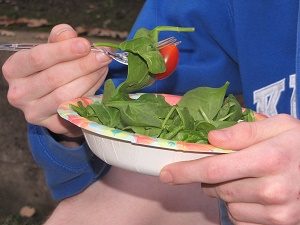 If only CB had its own salad bar. Then you too could have a rad salad like this one.

If there’s one thing vegetarians and omnivores alike want to see at the CB cafeteria, it’s a salad bar.

“If we could have our own salad bar, I feel like if CB had a salad bar, more people would eat [at the cafeteria],” Stephanie explains.

“My old school had a salad bar,” adds Adriana.

A salad bar would be a perfect way for vegetarians and non-vegetarians alike to get their healthy dose of vegetables. Not only would it allow students to personalize their lunch (without having to go through all the trouble of packing one in the morning), but it would also allow students with certain dietary restrictions ― vegetarian, gluten-free, kosher, etc. ― to maintain a healthy and balanced diet while on campus.

CB students eat one-third of their daily meals on campus (one-half, depending on if you eat breakfast or not), five days a week. That adds up to a lot of meals on campus, which means that vegetarians who eat at the cafeteria regularly are probably struggling to maintain a healthy diet.

“Iron in meat is more easily absorbed than that in plants, so in order to maintain a healthy diet, I have to make sure to eat twice the amount of recommended iron intake for the general population,” Marci claims.

We aren’t saying that the cafeteria is bad. I mean, it’s not exactly the most popular thing in the world to be vegetarian, so I can see why they don’t have the most varied of vegetarian options. But CB has a small but thriving population of vegetarians, that don’t want to have to deal with the acid indigestion that comes along with having grilled cheese or cheese pizza every single day for lunch.

There are lots of really cool options out there for non-vegetarians. All of them of pretty decent quality too (For all you nay-sayers out there: it’s a high school cafeteria, not a Seasons 52. You can’t expect a five-star meal everywhere). It’s pretty rad that you can get Mongolian beef one day and a steak burrito the next day.

But why can’t vegetarians expect the same kinds of choices? Instead of cheese pizza one day and a Caesar salad the next, how about a Portobello burger and a vegetable stir-fry?

“When I was an omnivore, I would eat their wraps, like the chicken wraps they have,” Stephanie says. “That was super good, and they can [make something like that vegetarian].”

If the cafeteria can put in the extra effort to make omnivorous food that rivals the quality of pseudo-fast food restaurants like Panda Express or even Chipotle, why can’t they make vegetarian food of the same quality? It’s not like cooking vegetarian food is that much more difficult, and when you’re cooking for a large group of people it’s almost easier because you don’t have to worry about giving your customers food poisoning from not cooking everything through like you would with chicken or pork. Plus, vegetarian cooking on a large scale can often be much cheaper than cooking meat.

A lot of people (usually meat-eaters) complain about food at the cafeteria being too expensive. But I wouldn’t mind paying a couple of extra bucks if it meant I didn’t have to spend those ten to fifteen extra minutes in the morning groggily throwing together a mishmash of foods that vaguely appear to be a lunch.

But until Sodexo changes their meaty ways (or until I change my veggie ways), I will have to make myself a sack lunch every single day of my high school career.