Francis Brings Out The Flock

A life-changing trip to see Pope Francis himself. I could not believe it at first. I was looking right at the most influential man in the world. I was looking at Pope Francis. I always expected to see the pope in Vatican City on his balcony while studying abroad in Italy during college, but Christian […]

A life-changing trip to see Pope Francis himself. 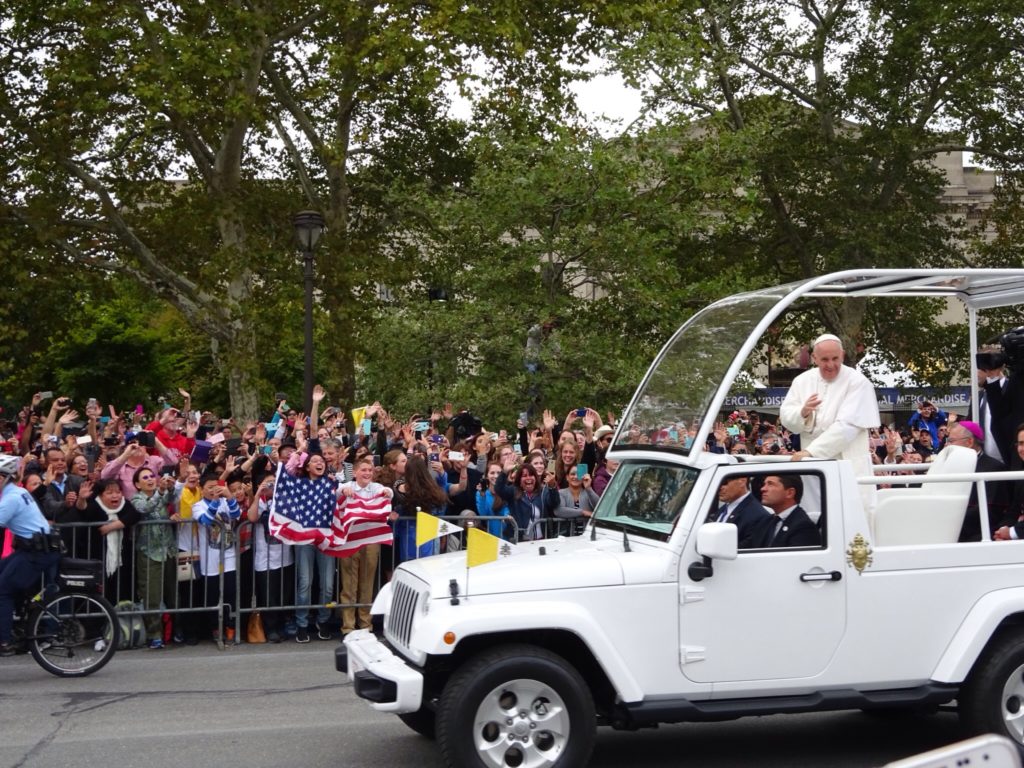 I always expected to see the pope in Vatican City on his balcony while studying abroad in Italy during college, but Christian Brothers gave me the opportunity to witness his power first hand when he made his first trip to the United States and made a stop in Philadelphia for the World Meeting of Families and the Festival of Families.

We began our journey on an unreasonably early morning flight out to Philadelphia with a connection in Salt Lake City. There were 23 of us from CB: eight parents, twelve students, and three teachers. Excitement was brewing, and upon landing in Philadelphia you could already feel the love for the pope.

The Festival of Families posters were sprawled on every wall and Pope memorabilia, including the infamous bobble heads, could already be purchased. I felt the power of the Bishop of Rome from then on.

From the 23rd to the 28th of September, Christian Brothers took over the city of Brotherly Love. Our first night there was spent eating real fried mozzarella sticks in a small town restaurant and dreaming about what the pope could look like. We woke up the next morning and visited La Salle University. We were able to witness the La Salle Core Principles at work in someplace other than CB and meet up with a CB alum Blake Edwards ’15.

Following the college tour, we toured Independence Hall and saw where the Pope was scheduled to speak on Friday evening. We were also able to find our coveted bobble heads in a store right across from the Liberty Bell. We walked for what seemed like miles until we eventually arrived at our next stop, the World Meeting of Families at the Convention Center. Our whole group worked alongside 150 other volunteers to make meal bags. These meal bags provided meals for six people per bag. I was in charge of boxing the bags along with other students in our group and over the course of two hours, we put together 40,000 meals.

We followed up our volunteer work by walking the streets of Philadelphia for hours in search of our first Philly cheesesteak. Before finding one, we came upon the Cathedral Basilica of Saints Peter and Paul. Outside there was ‘Knotts Grotto,” a dome where we tied prayers that were written on ribbons. We each wrote our own prayers and two days later, all our prayers were blessed by Pope Francis. More walking led to us finally settling for a restaurant with a Pope Special priced at $17.76.

There are two types of waiting. The calm waiting that results in five minutes of standing waiting for a register to open at your favorite store and then there is the nine hour wait you endure to see the pontiff. We experienced the latter. Prior to the Festival of Families, the Pope would be parading around the streets of the city.

The whole group woke up unreasonably early and we drove about fifteen minutes to catch a 30 minute train ride. We arrived on Benjamin Franklin Parkway at around 10 in the morning, after walking about two miles from the train station, we settled down and picked a spot right on the fence line.

We waited patiently. Very patiently. As JR Aguirre (’18) puts it, “we learned how to be patient throughout this trip”. 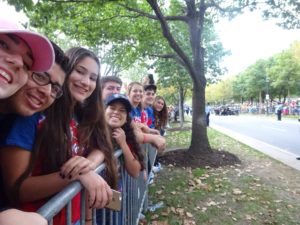 I learned the art of rosary making and napping in front of thousands of people. I experienced pizza cones that were available from the food stands and met many people who commented on our matching Tye-dye shirts. We learned of people who had once heard of Sacramento from an acquaintance and we talked to strangers who were also involved with the Christian Brothers.

The whole world seemed to have gathered, or at least all of the United States. Every state seemed to be represented and the joy of being in the same area as the pope beamed off of everyone’s face. There were confessions being done behind statues and free booklets being handed out from the hundreds of nuns that were at the event.

The strangest moment of waiting was when three fire trucks showed up right in front of us and a police officer came to us and said that a strong chemical smell was coming from the sewer and with all their tools, the firefighters rushed the manhole. Security was insane throughout the week in Philadelphia. SWAT, FBI, State troopers, and city police officers were all there.

Dressed in all black and carrying all types of weapons, the Counter Terrorism Unit was the most noticeable. Snipers could be seen on every roof surrounding the parkway and all law enforcement was on high alert. The pope attracted everyone’s attention.

10 hours later, I saw him. I saw Pope Francis. His driver was going about 20 miles per hour and it seemed like he sped off, but we all reveled in the fact that we saw the Pope. We exchanged photos and a little disappointment in how he did not get to slow down to see us, but we still had the night left to absorb what just happened.

“We had just seen the pope and I felt amazing,” Katie Enos (‘16) explained. “The atmosphere changed. It was crazy.”

We saw Mark Wahlberg and families from all over the world speak to the pope about their faith throughout the night. We sang along with The Fray to their famous song “How to Save a Life” along with thousands of other people. We ended up leaving before the pope’s speech, knowing that we would have a long day ahead of us and still had to make our way back to the hotel which was located in the next town over.

“We missed out on the Pope’s speech that night, but we were just so exhausted and excited from that day’s festivities that we were all okay with it,” Katie said.

Days earlier, when we got off the plane in Philadelphia, CB Director of Campus Ministry Ms. Jennifer Yearwood came toward all the students with “Flat Francis”. A paper with the pope holding his hands up and a poster of the World Meeting of Families held up by a popsicle stick. Early on in the trip we deemed it necessary for Flat Francis to be included in every aspect of our trip. He took pictures with the pope in the background, with the whole group at La Salle, and with his own Philly Cheesesteak. All of the trip, Flat Francis never left our side. 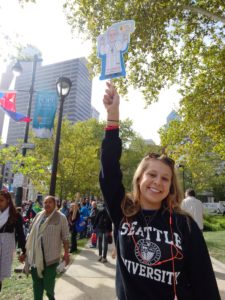 After arriving back at Benjamin Franklin Parkway on Sunday morning and finding a spot where we would be able to stay throughout the morning, all of the students fell asleep, including me with Flat Francis by my side. It was a peaceful nap, until the people in front of us began singing and never stopped.

We continuously heard Pope Francis being yelled in Spanish and many Spanish Catholic songs from the people in front of us, but it was the singing and excitement that made the atmosphere. There was joy in the air and happiness radiating from everyone there.

“It was special how everyone seems to rally together to share this incredible experience,” Katie commented.

The wait on Sunday was nowhere near as long as Saturday’s wait, but it was still worth it. The Pope came around in his car before performing the Sunday mass and the whole CB group was able to witness the pope up close. His security team brought babies to him at every corner.

There were pictures being taken and we were standing on our toes while running around to get the best look at him. I made a conscious effort to keep my camera on by my side and focused on taking in the moment. While the rest of the group got amazing pictures, all I remember is him waving at the thousands of people that looked at him.

The silence I felt that morning in Philadelphia was silence I constantly remind myself of when I’m in a predicament. I close my eyes and visualize the moment of silence at the hands of the Pope and I suddenly become calm. I could have never imagined seeing the Pope, especially on his first trip to the United States.

Being given the opportunity to visit Philadelphia and be in the presence of the Pope connected me to my faith in a way I did not think was possible. I reconnected with my love for God and my appreciation for the little things in life. I am eternally grateful for the experience that CB provided me.