An ancient craft reﬁned for the modern times, ceramics is one of the lesser known art forms offered at Christian Brothers. The unbridled creative potential of many Christian Brothers students comes to life, expressed through a mishmash of clay creations. Before the brain juices flow, however, they must do a good deed for the class, in this […]

An ancient craft reﬁned for the modern times, ceramics is one of the lesser known art forms offered at Christian Brothers. 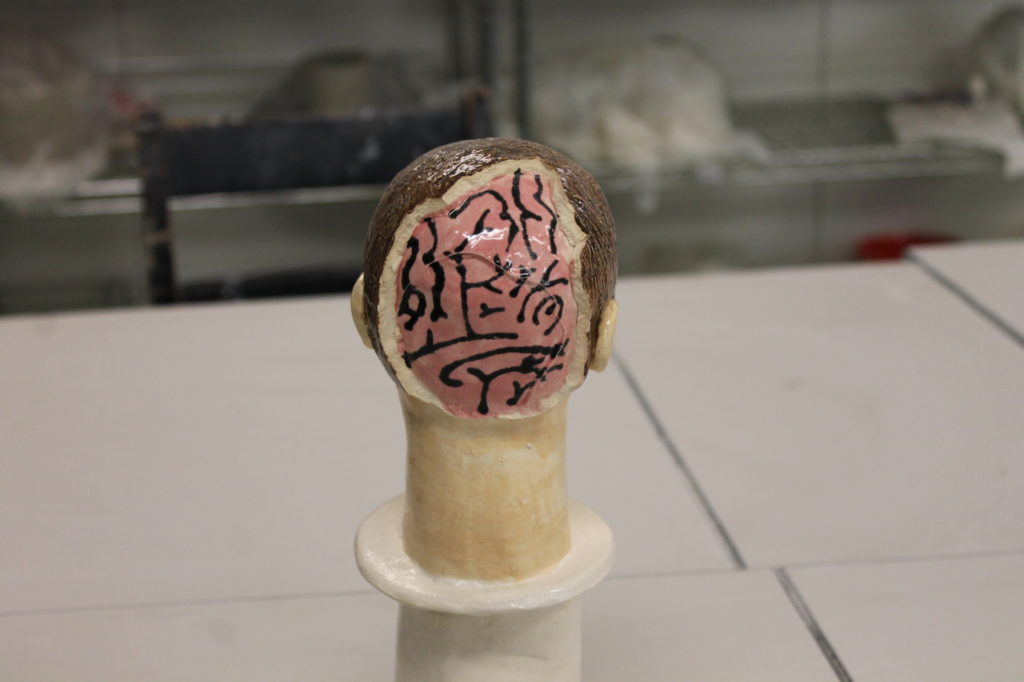 The unbridled creative potential of many Christian Brothers students comes to life, expressed through a mishmash of clay creations. Before the brain juices flow, however, they must do a good deed for the class, in this case, making pottery for those in need.
The two ceramics classes, being ﬂipped classrooms, contain a mix of Ceramics I and II. This class structure allows for the higher level ceramics students to assist in teaching the beginner ceramics students, sharpening both minds while also giving the teacher, Mr. Rob Boriskin, more time to work on general class work.
“[A flipped classroom] promotes greater productivity and has proven to be an efficient way for both sets of students to retain and practice the varying styles,” he says.
After reinforcing the only rule in the class — no electronics — Mr. Boriskin  sends the students on their own to craft their hearts’ desires, their only limits being time and the omnipresent force of gravity.  Once the imagination takes ﬂight, clay goes ﬂying, shaping into pots, bowls, mugs, and vases, all with unique designs. 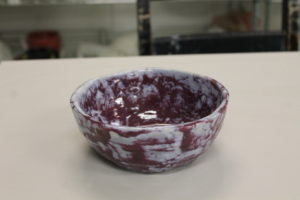 Jizelle Castaneda (’16), a valued member of Ceramics II, brings to life wonderful works of art. Her latest creation is a beautiful purple bowl with an interesting smattering of white smears, portrayed in an aesthetically pleasing manner. This bowl, having been through the intensive firing process several times, is now ready to be used to eat out of, store objects in, or simply used as eye candy. 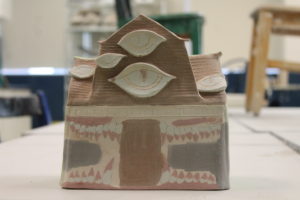 Neil Zhang (’16) is nearing the completion of his house, part of a larger village with a Halloween theme. The monster house is a thing of nightmares, with glistening white fangs bared in a macabre greeting. The numerous eyes are constantly watching, unwavering, steering away even the boldest of thieves. The details regarding the house’s teeth were Neil’s proudest achievements so far.
“The bloody teeth are what make this house the terror that it is,” he says.
Though unpainted so far, the house remains a grim creation among the bright, cheerful bowls on his shelf.
Dana Calles (’16), a Ceramics II prodigy, excels in her craft. A recently completed project of hers was a model can in an effort to promote the Canned Food Drive. With the slogan “We can do it,” her can was be displayed along with the other ceramics cans in an effort to raise awareness for the charity.
Another creation of hers, a milky white teapot embedded with purple streaks and smears, is a good example of the potential any ceramics student can achieve through hard work and determination. 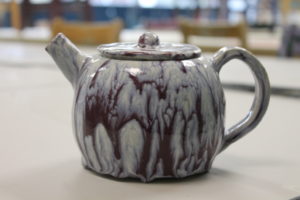 The bane of all medieval peasants, dragons come to life thanks to the masterful hands of Heather MacDonald (’16). These fearsome creatures are tamed in clay, given in great detail, every ridge line giving the dragon more and more life. Though incomplete as of yet, such grand design can only be improved upon through glazing and ﬁring, and CB holds its breath in anticipation for the ﬁnished product.
Each bowl, masterfully crafted by a CB student, is taken by the box to the River City Food Bank where they are then given to the Empty Bowls charity. This charity donates bowls to those in need and who are suffering a current state of economical poverty.
The bright, joyful bowls, made and designed with love, help alleviate even a little stress from the families who can use some hope. Once the good deed is done, students are sent off to complete a variety of projects, boxed in only by the very limits of their imagination.
The hands-on adventure of ceramics allows the students to express themselves; the cacophony of colors, designs, and glaze give the audience a glimpse into the artist’s soul.
Tagged: Dana Calles, Heather MacDonald, Jizzelle Castaneda, Mr. Boriskin, Neil Zhang
Share: