Books Are Cool Enough For School

Usually when you hear students speak about their assigned reading, the word “boring” is present. But there are a few books at CB that warrant other, more positive adjectives from students. Chances are you’ve never heard a student rave about a book they were forced to read to write an essay or take a test […]

Usually when you hear students speak about their assigned reading, the word “boring” is present. But there are a few books at CB that warrant other, more positive adjectives from students. 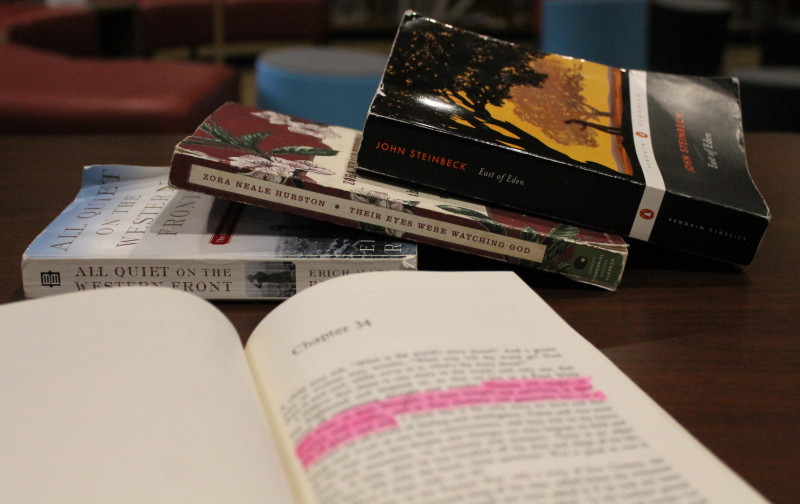 Chances are you’ve never heard a student rave about a book they were forced to read to write an essay or take a test on. Allegedly, some students don’t even read them, they just use Spark Notes. But in every stack of bound pages there are a few gems.

A Midsummer Night’s Dream is a Shakespearean comedy read in CP Sophomore Literature that features lots of magic and craziness, with a unique plot, a love rectangle and a briefly donkey-headed man named Bottom.

As the play was written in the late 16th century, the language is a bit harder to understand, so reading the play by oneself could get to be challenging.

But the fact that the comedy wasn’t read solo was what Maile favored the most.

“I enjoyed having each character being played by a different person,” she stated. “We got to fully experience everything we were reading.”

Another Sophomore Literature hit at the CP and Honors level is All Quiet on the Western Front, by Erich Maria Remarque, a World War I veteran. It was one of the first war novels to feature a view of war that wasn’t romanticized, and the powerful portrayal has stuck with many since they’ve read it.

“It was my introduction to the history of modern war in literature,” says Carley Huntington (’17). “I think its really incredible that it spiked the anti-romanticism movement.”

Fellow junior Jacob Esquivel (’17) also enjoyed All Quiet on the Western Front, and A Long Way Gone, another war novel that is one of the summer reading options for CP World History II. He also enjoyed  A, a memoir by Ishmael Beah, who was a child soldier in Sierra Leone.

“I enjoyed them because more or less both of them were actual accounts of what happened,” he stated. “War is one of the ultimate follies of man and I like it when we get to see what the soldiers directly facing wars think and feel about their situation.”

Maile also enjoyed one of the other summer reading options for history, The Girl with the Pearl Earring, a historical novel written by Tracy Chevalier.

“It was [just] so interesting,” she said excitedly. “Being able to immerse yourself in characters is always amazing.”

Personally, I favor  East of Eden by John Steinbeck, which I read fairly recently for Honors American Literature. The 600 page novel features the interconnected stories of two families in Salinas Valley, California. Along with the many characters are biblical references, so many that the book is sometimes called a modern retelling of Genesis.

But what really makes the story interesting is the sense of character development. It is so easy to get immersed in the characters’ thoughts and feelings, and once I started reading it was very hard to put down.

“I liked the character development and the symbolism [in the novel] the most,” Carley says.

“Usually I’m not a big Steinbeck fan,” she added, “but he nailed it.”

As Jonathan Claridad (’17), simply puts it, “EAST OF EDEN IS FABULOUS!”

Another novel that is praised in the junior community is Their Eyes Were Watching God by Zora Neale Hurston, which is read in CP American Literature.

“I really enjoyed it because it was very insightful as to the way women were treated” says Jennifer Rustad (’17). “I enjoyed how Janie, the main character, didn’t accept the poor treatment from the men.”

“Throughout the entire book [Janie] is trying to find her voice and she uses her speech as a mechanism for liberation instead of accepting it as the controlling force the men use,” Jennifer continued. “She doesn’t conform to the way she is ‘supposed’ to be according to society and pretty much rises above those around her and really stands out.”

As it turns out there are actually many students that enjoyed an assigned reading book or two. So next time you think about not giving a novel or a play a chance because it is assigned by a teacher, remember that not all school books turn out to be drab and boring.