Music is one of Mr. Hood’s most widely observed interests, and his broad taste of songs is recognized campus-wide as being positively remarkable and diverse in nature. “I cannot live without books, music, and films.” – Mr. Michael Hood An expansion of Thomas Jefferson’s famous original quote, “I cannot live without books,” this perfectly stated […]

Music is one of Mr. Hood’s most widely observed interests, and his broad taste of songs is recognized campus-wide as being positively remarkable and diverse in nature. 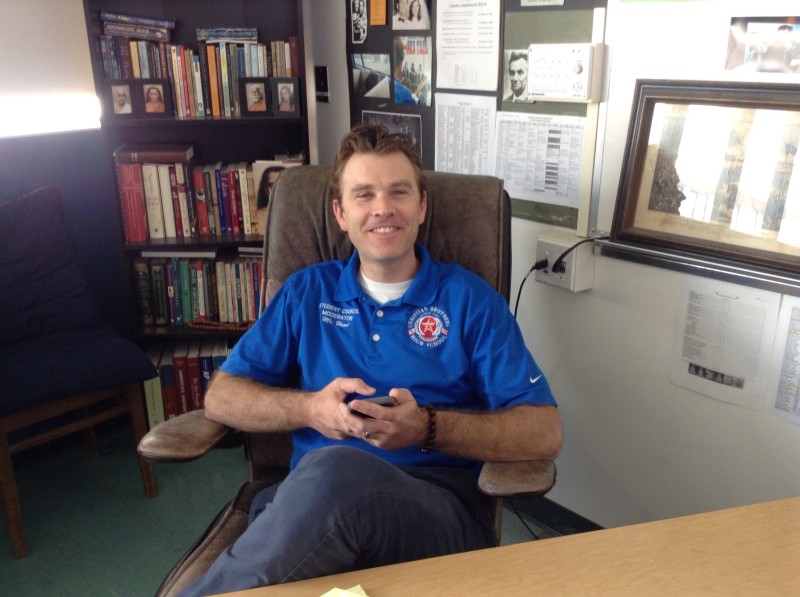 An expansion of Thomas Jefferson’s famous original quote, “I cannot live without books,” this perfectly stated expression describes in a nutshell the general interests of Mr. Hood, the CB history teacher known for his great head of hair and unrivaled knowledge of prominent U.S. historical figures ranging from Henry Clay to Abraham Lincoln.

In his seventh year as a teacher at Christian Brothers, the reputable and highly respected AP U.S. History and Psychology instructor has also become associated with his unique auditory favorites and willingness to experiment with new tunes.

When questioned about how his musical preferences have evolved, the Psychology teacher traced his initial interests back to his pre-high school years.

“In eighth grade I started listening to jazz, which I began listening to by accident really,” he recalls. “I bought a cassette tape of Miles Davis, and that was really my first experience with jazz.”

In high school, Mr. Hood moved into the timeless genre of classic rock, as well as listening to the trending alternative hits of the decade.

“The music I was really into in high school was classic rock, with groups like Pink Floyd, Santana, and Led Zeppelin. But I was also into the 90’s alternative stuff like Nirvana and Smashing Pumpkins,” he recounts.

The U.S. History enthusiast first began to experiment with new and different kinds of music that reflected his personal interests following his time in high school and into his college years.

“I eventually got past the point where I was trying to listen to what everybody else was listening to, and I started experimenting with what I actually liked,” he says. “Jazz is so broad, and so I got really, really into listening to jazz.”

Since having discovered his niche, Mr. Hood designates a portion of his classroom board to offering suggestions for his students to listen to. These recommendations for students, which often include jazz pieces, are written on his board on a weekly basis in addition to an open box for suggestions for him. This box is quickly filled up by students from his class with songs, albums, and artists from all genres.

“I have a tendency to get into a rut of only listening to jazz, so I only listen to the same stuff over and over again,” the psychology instructor explains. “So sometimes a student will send me a list of music that’s really genuinely amazing and that helps me change up what I listen to a bit.”

The history teacher has an open mind in listening to new varieties of music and does not make any assumptions about whether he will like or dislike a song before he has heard it, an astounding quality considering how frequently people will judge music based on an often unfounded opinion of a particular artist or genre.

“There’s really no music I won’t listen to, so if you recommend [anything], I’ll listen to it,” he says.

Harrison Daly (’17), a junior in one of Mr. Hood’s AP U.S. History classes, likes how his teacher allows for students to write recommended songs on his board as a way to discover new music and further his appreciation of different varieties.

“He seems to be very open minded to try listening to music that people write on his board,” acknowledges Harrison, who has recommended albums to his teacher such as Patti Smith’s Horses.

Mr. Hood’s musical interests have developed over the course of his life, with genres ranging from classic rock to alternative to the classical symphonies of Mozart and Beethoven.

“I’m a music lover,” he admits plainly. “I can’t play anything, but I’ll listen to anything.”

Jazz music, which cannot be defined by a certain type of melody or style because it is so fluid and unique, tops the list of Mr. Hood’s favorite genres to listen to.

“My favorite artist of all time would be John Coltrane, my favorite [Coltrane] album would be A Love Supreme,” he responds without hesitation.

Mr. Hood’s fascination withA Love Supreme is quite understandable, as the 1965 album is widely viewed as one of the greatest jazz compilations of all time, along with other popular tracks like Miles Davis’ Kind of Blue and Charles Mingus’ Mingus Ah Um.

Students like Harrison have come to appreciate jazz as well, whether in part due to his teacher’s recommendations or not.

“I think that [Mr. Hood] has a really great taste of jazz in particular,” Harrison says. “I also really enjoy how he introduced me to Joni Mitchell, whom I like to listen to a lot.”

How Mr. Hood developed such a distinctive ear for jazz is quite a tale, and his willingness to listen to anything is quite an impressive fact in itself.

More importantly, the manner in which Mr. Hood discovers music that he really enjoys sets a great example for people to find what they really enjoy, whether it relates to music or some other pursuit. We all possess our own distinct preferences and interests, and we can learn from Mr. Hood how to be open to trying new things, even if it is only in a small matter like listening to new songs that can expand our musical appreciation.